Climate Warming Is Altering Animals’ Gut Microbes, Which Are Critical To Their Health And Survival

It seems like each day scientists report more dire consequences of climate change on animals and plants worldwide. Birds that are migrating later in the year can’t find enough food. Plants are flowering before their insect pollinators hatch. Prey species have less stamina to escape predators. In short, climatic shifts that affect one organism are likely to trigger ripple effects that can disturb the structure and functioning of entire ecosystems.

One component of animal health that largely reflects the surrounding environment is the microbiome, the consortium of microbes now known to aid in food digestion, regulating the immune system and protecting against pathogens. The species of bacteria that make up the microbiome are primarily recruited from the environment. Thus, food webs and other animal interactions that influence environmental bacteria have the potential to shape animals’ microbiomes.

But what happens when climate change disturbs the environment, causing shifts in animals’ microbiomes that prevent the microbes from performing the key functions that animals need to survive and thrive?

I am an ecologist in the laboratory of Gui Becker specializing in tropical research at the intersection of emerging amphibian disease and climate change. Hundreds of amphibians across the global tropics are facing mounting pressures from disease and climate change. And there is growing evidence that environmental stressors are changing animals’ microbiomes, contributing to the challenges they face.

In a recent experiment designed to figure out how the microbiome of tadpoles was influenced by other animal species in the environment, my colleagues and I studied healthy communities of freshwater bacteria, crustaceans and insects from wetland habitats in the Brazilian Atlantic Forest. We focused on their feeding activities – how they filtered water to get their food and broke down dead plant material.

It is well known that these feeding activities are essential for ecosystem functions such as decomposition. But we found that these food webs also served another purpose: They boosted growth of “good” bacterial species in the environment, such as species that fight pathogenic microbes.

As a result, tadpoles sharing the ecosystem with these microorganisms and invertebrates had healthier gut microbiomes. This provided a strong defense against pathogens, compared with tadpoles that weren’t sharing their habitat with diverse networks of organisms.

Our latest work took this research a step farther by testing how a disturbance such as climate warming could influence these food webs that help ensure the health of vertebrate microbiomes in the wild. 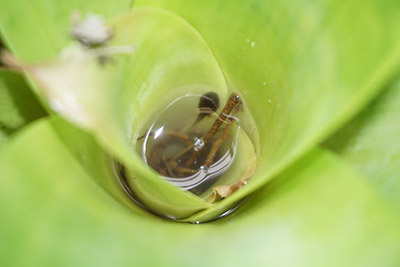 Mapping species interactions in diverse ecosystems is difficult under field conditions, where the environment is unpredictable, and replicating experiments to confirm findings is challenging.

To address this problem, we used plants from the bromeliad family to function as mini-ecosystems so that my colleagues and I could study the effects of a warming climate on species interactions in the more controlled conditions of a laboratory.

Bromeliads are ideal for experimental work on community interactions because they are natural microcosms and their small dimensions allow for us to grow many of them in a small space. Our study sites in Brazil’s tropical rainforests support extremely high densities of bromeliads from ground to canopy, often resembling a Dr. Seussian wonderland.

To recreate natural ecosystems for our experiment, we planted a garden of 60 identical bromeliads outdoors in the shade of a small tropical forest in São Paulo, Brazil. We then allowed the bromeliads to be naturally colonized by invertebrates and microorganisms for three months. Some of the plants were exposed to ambient temperatures, and others were warmed up to six degrees above ambient – with a custom outdoor heating system – to match predicted global climate change trends.

Nearby, we collected our model host species for the experiment – tadpoles of the treefrog species Ololygon perpusilla that breed only in the mini-aquariums created by the leaves of bromeliads.

We then transferred the bromeliads from outdoors into the lab, added a tadpole to the tiny pool of water at the center of each plant and applied the same heating system to simulate warming. After a few weeks, we inventoried the bacterial species in the tadpole intestines as well as the bacteria and invertebrate species living in the bromeliads.

The Domino Effects Of Climate Change 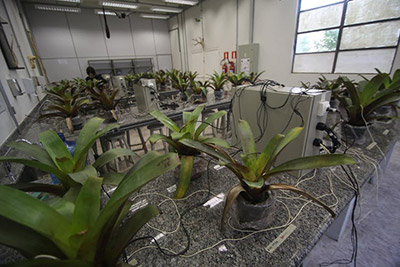 Setup of the experiment with 60 bromeliads and a custom heating system. Gui Becker, CC BY-SA

In this study, published in Nature Climate Change, we found that warming effects on ecological community networks – including environmental bacteria, worms, mosquito larvae and other aquatic invertebrates – compromised tadpole gut flora, leading to reduced growth, which is a proxy for fitness.

The higher temperatures also led to faster development of filter-feeding mosquito larvae. Our results suggest that higher rates of filter-feeding also altered the species composition of bacteria in the environment in ways that further disturbed the tadpole microbiome.

Our work demonstrates how global-scale climate change can impact even the smallest levels of biological organization, including the symbiotic bacteria living within the digestive tract of a tiny frog species.

Looking at these processes within the context of an entire ecological community helps widen our perspective on microbiome health under global change.

Studies investigating effects of warming on vertebrate microbiomes typically focus on direct temperature responses of host flora rather than situating hosts within the complex and intertwined communities where they live in the wild.

Our findings support a growing consensus among scientists that, while climate warming is expected to push some animals beyond their thermal thresholds, a far more ubiquitous consequence of warming is that it may trigger an ecological domino effect, disrupting the species interactions that ecosystems need to function properly.