PR people, increasingly dependent on sophisticated cellphones for news, info and communication, must be aware of dangers they present. Cellphones are the tip of the radiation iceberg. Powerful Wi-Fi routers in offices, cell towers atop buildings beaming into apartments, and towers in many other places including church steeples, are a threat to the health of those in their paths and especially children and seniors.

Since upwards of 80% of PR people are women and many are mothers of young children, they need to be aware of threats to themselves and their families. Plenty of documentation is at Bio Initiative.

Public Discussion On Tap In Massachusetts

Senator Karen Spilka's Bill S. 1268 aims to form a commission to address all aspects of wireless radiation and public health. It is to be heard December 11th.

Senator Donald Humason’s Bill S. 2080, to be heard November 28th, asks to have the medical community trained and to provide insurance for the “growing number of wireless radiation-related illnesses.”

The state’s Department of Elementary and Secondary Education is examining the biological risks of Wi-Fi in schools. It is also reviewing testimony on all seven wireless radiation bills, is in conversation with the Department of Public Health, and is strategizing on ways to protect students and staff. Director of Digital Learning is Kenneth Klau.

They are under final review with DPH Commissioner Monica Bharel's office at present. Robert Knorr, Ph.D., is Director, Bureau of Environmental Health.

Further documentation is in this YouTube segment hosted by Cecelia Doucette and Keith Marciniak. 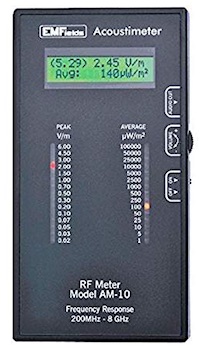 Concerned PR people can measure the amount of pulsed radiation at offices and at homes via inexpensive devices. One is an Acoustimeter which sells for $370 from Amazon.

Cecelia Doucette and other health advocates explain measurement of pulsed radiation in this segment. If management won’t purchase one of these devices, employees should buy their own. It’s a cheap investment considering the health issues that are involved.

Simple precautions are advisable but only one city in the U.S. has been able to post warnings about them in stores and that is after seven years of legal battles. That is Berkeley, California, and it faces another round of court battles.

Gov. Jerry Brown on October 16th vetoed a bill that would have allowed Fourth and Fifth Generation Wi-Fi transmitters to be placed about ten homes apart with no control over placements by local governments.

The landmark Berkeley decision could open the door to similar warnings at retailers across the U.S.

CTIA, the wireless trade association, whose slogan is “Everything Wireless,” had fought Berkeley on the issue for more than seven years.

Opposing it were 300 cities, 47 counties and more than 100 community, planning, health, environment and justice organizations.

EMF Safety Network and Ecological Options Network opposed SB 649 since the bill was introduced in March because it said cell towers emit harmful radiation. The bill would have allowed unlimited refrigerator-size cell equipment on utility poles, streetlights, sidewalks, in parks, on schools and public buildings with no safety oversight.

This article was republished from O'Dwyer’s Inside News of PR & Mktg. Comms.

See also:
Smart Meter Controversy Takes An Astonishing New Turn
Mobile Phones And Brain Cancer: ‘No Evidence Of Health Risk’ Is Not The Same As ‘Safe’