Love your Mexican food? Traditional indigenous food from Mexico is misunderstood in the U.S.—and is actually among the world’s healthiest.

Say “Mexican food” and many people have images of fried foods, smothered in cheese, with plenty of sour cream. It’s delicious food but not considered particularly healthy cuisine that fights diseases. Two professors in the San Francisco Bay Area, however, believe traditional, indigenous food from Mexico (available before the Spanish colonists arrived) is misunderstood and is actually among the world’s healthiest foods.

Together, they have written Decolonize Your Diet: Plant-Based Mexican-American Recipes for Health and Healing. The cookbook combines ancient wisdom with modern-day conveniences, using lesser-known ingredients such as jicama, nopales, and chayotes in creative ways. But it’s more than that. 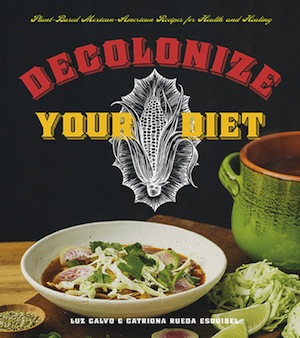 The book is also a well-researched “love letter” to all the abuelas (grandmothers) out there, who have kept alive these culinary traditions for thousands of years. Recently, Luz spoke with me about traditional Mesoamerican cuisine, and how returning to these culinary roots can improve many people’s health and well-being. (Don’t miss the recipe at the end!)

Teresa O’Connor: Researching traditional Mesoamerican cuisine became very important for you, Luz, after your breast cancer diagnosis. What were some of the most surprising things you learned?

Luz Calvo: I was quite concerned that one day my cancer would return, so I turned to research to learn about cancer-fighting foods. I found that there are so many phytochemicals in foods that help the body fight cancer. For example, anthocyanins (found in blueberries and both blue and purple corn) have powerful anticarcinogenic properties. Mesoamerican peoples grew many different kinds and colors of corn.

From reading the research, I became convinced of the importance of recovering the rich biodiversity of foods and learning about the potential of phytochemicals to prevent disease and increase my own chance of living a long life. Of course, I’m careful to explain that I am not advocating treating cancer exclusively with food, but there is no doubt in my mind that eating a plant-rich diet can help prevent many diseases.

O’Connor: Tell us about the Latina/o Immigrant Paradox. How did this information influence your research?

Calvo: Public health scholars have published hundreds of studies that prove recent immigrants from Mexico arrive in overall good health. These immigrants have low rates of overall mortality and incredibly low rates of infant mortality. Unfortunately, this good health declines after living in the United States for a long time, and the next generation (those born here) have the same poor health as others of similar socio-economic status in the U.S.

The Latino/a Immigrant Paradox led us to look carefully at the health knowledge and practices that immigrants bring with them—especially knowledge about food, recipes, remedios (home remedies), and so forth.

The Latino/a Immigrant Paradox is powerful, because it shows that one does not need to be rich to have good health. But one does need to be connected to ancestral knowledge and culture. Sadly, because of racism in the U.S., this ancestral Mexican knowledge is neither recognized nor valued.

O’Connor: How did pre-colonist Mexican cuisine differ from what many of us consider “Mexican food” today?

Food was not fried, but was instead boiled, steamed, or cooked on a comal (a clay griddle). Nixtamalized corn was the basis of the diet, supplemented with beans and squash.

In addition, Mesoamerican people ate a wide array of wild greens. The nahuatl word for edible wild greens is quelitl. When the Spaniards arrived, the word changed to quelite. Quelites are still foraged in communities both in the U.S. and Mexico. Some of these prized foraged greens are lamb’s quarters, purslane, and watercress, but also include lesser-known greens such as romeritos and huazontles.

O’Connor: How can today’s Latinas/os return to their cultures’ food roots for physical and spiritual connection?

Calvo: We encourage young Latinxs to engage their oldest relatives in conversations about the old ways to try to recover family knowledge and traditions. Sometimes, our elders don’t know the value of their knowledge. They think the old ways are no longer useful now that there are supermarkets, fast food restaurants, and Western doctors.

We should engage our elders in these conversations and value their knowledge. There is something very powerful about realizing that the tamales we eat today have been passed down from generation to generation for thousands of years. This is just one example among many of indigenous knowledge that has been kept alive via family recipes. Cooking traditional foods is a way to honor our ancestors.

O’Connor: What worries you most about today’s food system? What inspires you most?

Calvo: I’m mostly worried that we are developing a two-tiered system. Folks with money, especially here in the Bay Area, have access to beautiful organic produce and have the time to cook life-affirming meals. Meanwhile, poor folks are put in an impossible situation, trying to find ways to feed their families with scant access to produce but ready access to cheap, processed food.

That said, I’m inspired by all my neighbors who grow food in their front yards, in pots, and on balconies. In our neighborhood, a Mexican family grows chayote and nopales in their front yard, and their Chinese neighbors grow goji berries by their chain link fence and bok choy in plastic buckets.

We know that communities of color have been growing food for their families in urban environments for decades, long before it became “hip.”

From Decolonize Your Diet: Recipe For Alegría Power Bar (page 232)

We think this is one of the original “power bars.” These amaranth treats date back to before the Conquest, when they were shaped into many forms, such as skulls, toys, and mountains.

Alegrías are sold today as bars or discs in Mexico City’s tianguis, or open-air markets. The combination of nuts, seeds, and amaranth make this a high-protein breakfast.

Note: A candy thermometer is used in this recipe.

Line a cookie sheet with parchment paper and set aside. In a large bowl, combine popped amaranth with pumpkin seeds, sunflower seeds, peanuts, and currants. In a medium saucepan on medium-high heat, cook honey and salt until mixture starts to foam up. Immediately reduce heat to medium-low and simmer for about 15 minutes, stirring constantly and watching pan so that honey doesn’t foam over, until the temperature of the honey reads 300°F (150°C) on a candy thermometer.

Remove from heat and stir in lemon juice. Working quickly, pour the honey over amaranth mixture and stir with a nonstick spatula to evenly coat. Spread amaranth mixture onto prepared cookie sheet, place another sheet of parchment on top and press down firmly to compress mixture. Then use a rolling pin to press mixture into a rectangular slab about 10 x 12 in (25 x 30 cm) and about ½ in (1 cm) thick. With a knife or pastry wheel, cut into rectangles about 4 x 2 in (10 cm x 5 cm) (and save trimmings as a tasty cook’s treat).

Refrigerate for 2 hours. Then wrap bars in parchment paper. Store bars in airtight container in refrigerator.

Teresa O’Connor wrote this article for UC Food Observer. Teresa is the assistant editor of UC Food Observer. A former journalist, she has written and spoken about food trends, edible gardening and sustainability for national magazines, leading industry events and well-known brand names. Trained as a master gardener in California and Idaho, Teresa has written for both states’ extension services about food gardening.

This article was originally published by UC Food Observer. It was edited for YES! Magazine.