US beekeepers lost 40 percent of pollinator population in last year

A nationwide survey of U.S. beekeepers released on Wednesday found that the pollinators have been hit by another massive population drop, with 42 percent of bee colonies nationwide dying in the last year—the second-largest annual recorded loss to date and a number that is too high to be sustainable, according to researchers.

The survey was conducted by the Bee Informed Partnership, a consortium of universities and research laboratories, which took stock of more than 6,000 beekeepers across the country collectively managing more than 14 percent of the nation's bee colonies. The findings highlight a growing—and worrying—trend among pollinators, whose dwindling numbers could have long-term consequences for the U.S. food supply.

In one significant discovery, many of the farmers reported losses in the summer months—a rare occurrence on its own, but made stranger by the fact that the summer rates exceeded winter deaths for the first time.

"We traditionally thought of winter losses as a more important indicator of health, because surviving the cold winter months is a crucial test for any bee colony," said Dennis vanEngelsdorp, an assistant professor of entomology at the University of Maryland and project director for the Bee Informed Partnership. "But we now know that summer loss rates are significant too. This is especially so for commercial beekeepers, who are now losing more colonies in the summertime compared to the winter. Years ago, this was unheard of."

Environmental groups noted the scientific connection between the findings and the expansive use of pesticides pushed by agrochemical corporations like Monsanto.

"These dire honey bee numbers add to the consistent pattern of unsustainable bee losses in recent years that threatens our food system. The science is clear—we must take action now to protect these essential pollinators from bee-toxic pesticides," said Tiffany Finck-Haynes, food futures campaigner with Friends of the Earth, in response to the study.

Some pesticides, like neonicotinoids, or "neonics," have long been shown to be major contributors to the bee population decline. A pair of studies published last month found that neonics could be even more harmful to pollinators than previously thought, as bumblebee populations were found to be dwindling around fields where neonics were used to treat crops.

Dr. Emily Marquez, staff scientist at the Pesticide Action Network, said on Wednesday, "Pesticide corporations can't spin their way out of the threats to our food system…. In the decade since unprecedented bee die-offs began, honey bee decline has not slowed. The science is in: pesticide exposure plays a significant role in these declines. Our food and farming system can’t sustain this level of pollinator loss year after year."

"The continued decline of bee populations are the writing on the wall for EPA and the White House," Marquez continued. "Policymakers must take swift action to phase out the use of harmful bee-harming pesticides like neonicotinoids, restrict unnecessary and harmful practices like seed coatings, and invest in cutting-edge and green farming systems that ensure the continued prosperity of the nation's farmers."

Monsanto and other agrochemical companies "make billions from bee-killing pesticide products while masquerading as champions of bee health," Finck-Haynes said on Wednesday. "Are their profits more important than our food supply? Are they more important than the livelihoods of America's farmers? The Obama administration must act now to restrict neonicotinoid pesticides that threaten America’s bees, farmers and food security."

Take a thrilling look at the first 21 days of a bee’s life in this video by Anand Varma via National Geographic. 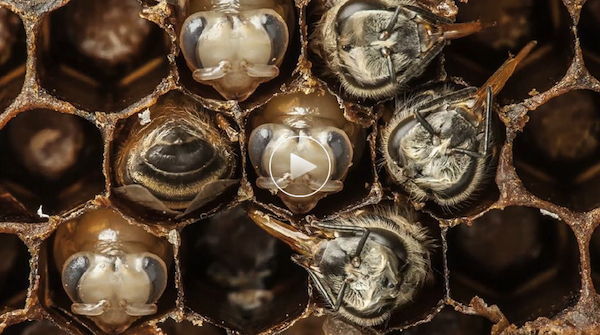