I’d like to share with you a rare opportunity coming to Framingham this week.  I realize some of you aren’t in the area but I wanted to pass along the  information below for the common good.  I hope you’ll take a few minutes to read this, then perhaps watch the video with Dr. Carlo below.

There will be a panel of world experts on wi-fi radiation holding a public forum Wednesday night right on Edgell Road.  The panelists will be in Boston in the afternoon to conduct a briefing with our legislators and anyone is welcome to attend that too. I dropped off the attached flyers to some of you last week, but wanted to give you all some background as it impacts Ashland.

I believe the panelist from India worked to have India’s wi-fi radiation standards reduced to a tenth of what they used to be (our 1996 FCC standards are still way too high based on peer-reviewed scientific evidence).  Another panelist is the former long-time president of Microsoft Canada and my understanding is he left Microsoft and formed Canadians for Safe Technology.  We’ll also hear from leading scientists and doctors, including a mental health expert.

You may recall a couple of years ago I opened the conversation regarding wi-fi radiation in our town.  Here is a brief summary of where this has lead:

1. There is a lot of information available, so to help me keep it straight I created a simple Google Site for Understanding EMFs (the radiation emitted by our wireless devices).

2. The Ashland School Committee did their due diligence and really looked into the history, the science, the manufacturers and the lobbyists.  They saw that the manufacturers’ health advisories are buried in fine print and realized most folks, themselves included, did not know wi-fi operates off of potentially harmful radiation.  Ashland Public Schools therefore deemed it important to at least train our teachers and students on the manufacturers’ warnings and put as much distance as we can between our routers and access points, and students and staff.  They developed and rolled out Best Practices for Mobile Devices this school year (see attached training materials: slides used for staff orientation on opening day in the fall, a slide to train employees who join our staff throughout the school year, and a one-page reminder that is laminated and posted in every K-12 classroom in our district).

3. At the time, our town leaders did not know much about the issues and deferred to the Board of Health.  Our Board of Health, whose hands are already tied by industry on where cell towers can be placed locally, deferred to the MA Department of Public Health.  The contact I was referred to was not aware of the issues surrounding wi-fi radiation.  I have since discovered how this came to be, click here to learn the history from scientist Dr. George Carlo whose research was suppressed by industry and the FCC.

4. I bought a radiation meter and measured the wi-fi devices in our home.  The results showed the radiation exposure was way beyond what science has proven dangerous, so we ran Ethernet cables to our daughters’ laptops and turned off the wi-fi, replaced portable phones with corded, put our wi-fi router on a timer, and agreed not to keep cell phones in our bedrooms so they don’t pull signal and interfere with our bodies’ cell regeneration while we are sleeping.  Radiation exposure is high in the car as the cell phone is continually searching for towers, so while driving I put my cell phone in Airplane Mode then check for messages at my destination.  Texting pulls less signal, so we text when we can, and when we have to make a call we use speakerphone or a hollow-tube headset that has no wire conducting radiation into our heads.

5. I met with Senator Spilka, and we measured the electromagnetic radiation emanating from her cell phone and her aide’s laptop.  Science indicates harmful effects near 3 milligauss of AC magnetic field, 1 kilovolt/m of AC electric field, and approximately 1mW/cm2 of microwave power. Both devices measured 100+.  In January she introduced Senate Bill 1222 to begin looking into this at the State level.

6. I received a call out of the blue two weeks ago from a woman who has worked with Representative Stephen DiNatale to introduce House Bill 2868 to raise awareness of the heavy radiation coming out of utility smart meters (gas, electric, water meters mounted on homes) and allow residents to opt out.  She informed me of the forums taking place on Wednesday.

7. A woman in Southborough discovered the bill Senator Spilka filed, and she called me. Their doctor has diagnosed her son with electromagnetic hypersensitivity (EHS).  It started with chest pain, tinnitus, headaches, nausea, dizziness, and then bloody noses with headaches.   Upon doctor’s orders, they have taken measurements in the school and determined he is severely harmed by their industrial wi-fi routers and access points.  The Mom knows of other children who are experiencing similar symptoms but whose parents are afraid to speak up for fear of losing their spot in this prestigious private school.

8. This month, Berkeley, CA unanimously passed an historic right to know ordinance.  I understand the telecommunications industry came in and defeated an earlier attempt in San Francisco, but a Harvard Law Professor offered his services pro-bono this time and put forth a bullet-proof ordinance.  Folks in Berkeley will now be handed safety information every time they purchase a cell phone. (It’s not as safe as using only hard-wired or fiber optic technology, but at least folks will know this technology is dangerous and keep devices off their bodies.)

9. In January, the French National Assembly made history by passing a new national law to reduce exposures to wireless radiation electromagnetic fields: http://ehtrust.org/france-new-national-law-bans-wifi-nursery-school/.  As some of you know, my daughter broke her leg while studying abroad in France this semester, and we discovered they do not provide wi-fi in their hospitals.  They put safety above convenience.

Here at home, the Berkeley ordinance will likely bring wi-fi radiation awareness mainstream.  That is why this expert panel is coming to Boston, to educate on the importance of right-to-know legislation to protect our citizens.  Since Ashland Public Schools have already taken measures to safeguard our students and staff, folks may look to Ashland for leadership.  These forums are a terrific opportunity to come up to speed, learn first-hand from experts what the issues are, and hear what citizens are concerned about.

I realize you likely have other commitments and the evening forum would make for a terribly long day, but this is a rare opportunity to hear directly from world scientists, public health legislators and industry leaders who want to help us protect our citizens.

Two things compel me to take action and not wait for someone else to sort this out at the top of our government.  First, a laptop in the lap of a man for just four hours changes the DNA of his sperm (see NIH report here) and that’s only one of many health threats we face.  Second, FCC chair Tom Wheeler is from the telecom industry where he suppressed scientific evidence in a long-term study he commissioned — it concluded in 1998 cell phones are not safe. See video with Dr. George Carlo.  And now, we are blanketed 24/7 by similar technology with wi-fi.  Even though the FCC guidelines are under review, I don’t have high hopes they will protect public health anytime soon.

The damage is being done right now and we have an incredible opportunity to be part of the solution.  Thank you for your consideration, perhaps we’ll see you in Boston or Framingham on Wednesday.  It doesn’t mean you’re hitching your wagon to anything, it just means you are concerned enough to make it a priority to learn.  Feel free to share this. 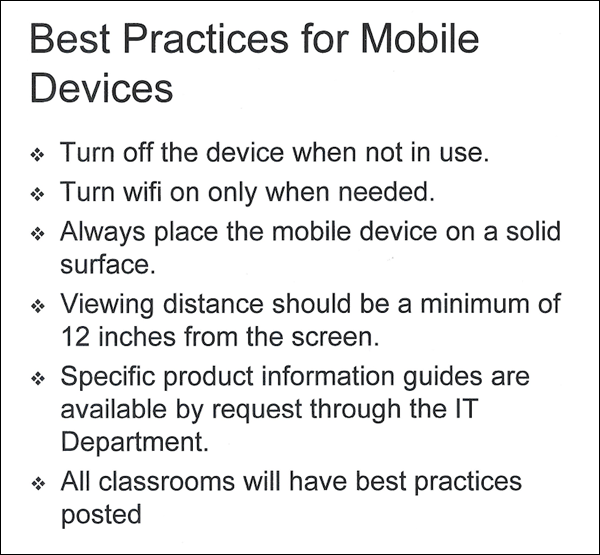 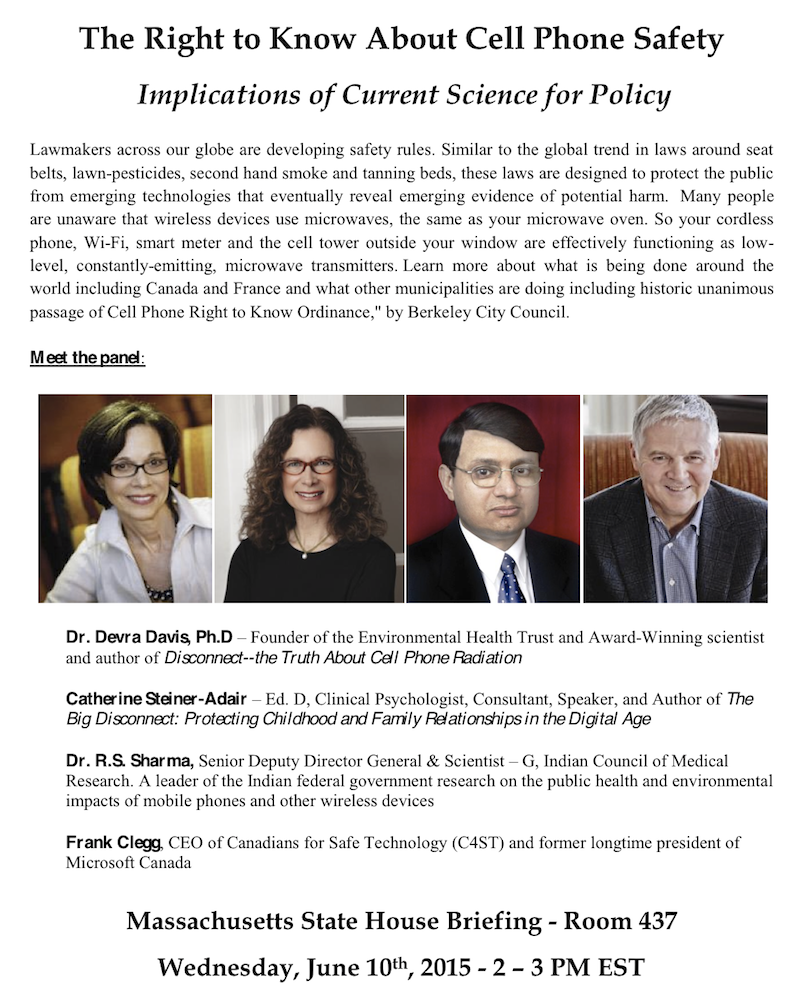 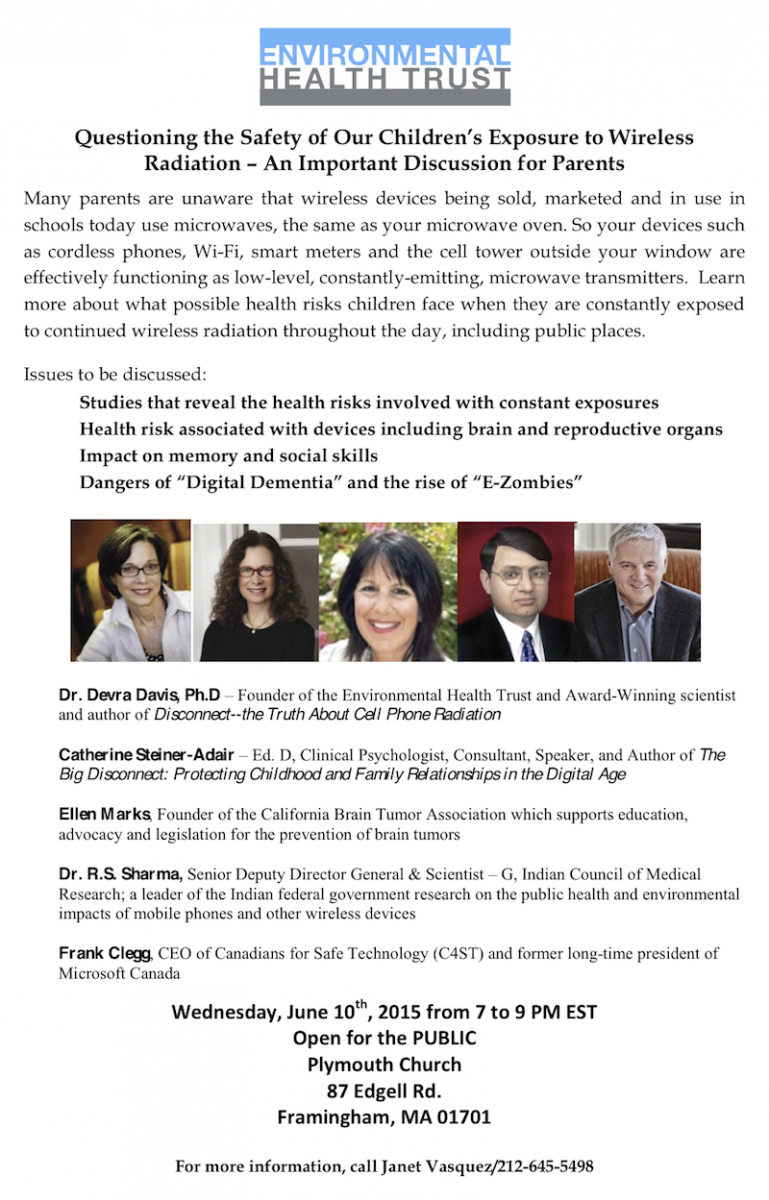