Fermented Vs. Unfermented Soy: Which Is Better?

One of the biggest misconceptions about soy that persists even today is that it’s a health food. While that statement may be partially correct (more about that in just a bit), for the most part, it’s a misleading and dangerous myth, and may be causing disastrous effects on the health of millions of unsuspecting consumers.

For decades, soy has been promoted as a healthy protein food. In response to heavy pressure from the soybean industry, the FDA approved a health claim for soy in 1999 that literally opened the floodgates for soy products.

The FDA’s approval allowed the food industry to slap the following words on their labels when they added soy:

“Diets low in saturated fat and cholesterol that include 25 grams of soy protein a day may reduce the risk of heart disease.”

This only fueled consumers’ beliefs about soy’s potential health benefits. Consequently, soy has been added to many products for both marketing purposes and to boost protein content of foods. Because it’s an inexpensive food, soy is truly a food manufacturer’s dream.

While the industry’s promises are endless in regards to soy’s purported health benefits, unfortunately, for the most part, they are not true.

What’s Behind Soy’s Claim To Fame?

How did soy get such a stellar reputation in the first place? It could at least be partly due to Asians’ reputation for leading long, healthy lives. We’ve been led to believe that these populations consume large amounts of soy, and that accounts for their longevity.

In truth, the Japanese eat less soy than Americans do. A 1998 study found that a Japanese man typically eats about two teaspoons, or eight grams, of soy a day. This is in stark contrast to recent figures for Americans. One soy burger alone provides nine grams of soy, and soy can now be found in some form in nearly every processed food.

When you look back at the history of soy consumption in Asian cultures, you see a much different type of soy. The Japanese have traditionally eaten fermented soy, which is much different from the unfermented soy most Americans eat today.

The Truth About Fermented Vs. Unfermented Soy

Fermented soy products are healthy protein foods. But what exactly is fermented soy? It’s a form of soy that has gone through a lengthy fermentation process that makes it digestion-friendly. The top three fermented soy foods are:

The friendly bacteria or probiotics found in fermented soy help nourish the gut and digestive flora, boosting digestion and the absorption of nutrients. Because the majority of the immune system resides in the intestinal tract, these beneficial soy products aid immune function, too.

Soy that has gone through this fermentation process is:

One of the biggest benefits of eating fermented soy products is for its vitamin K2 content. This vitamin is difficult to get from other foods, making fermented foods, especially natto or fermented soybeans, its best food source.

Researchers are discovering the many roles vitamin K2 performs in your body, along with vitamin D, calcium, and magnesium. These four nutrients work closely together and depend upon each other to function properly. Here are just some of vitamin K2’s actions in your body:

Here’s the best part about fermented soy: it contains the perfect form of vitamin K – vitamin K2 or menaquinone, or MK for short. Bacteria produce this type of vitamin K2 during the fermentation process. Vitamin K2 stays in your body longer, and provides even more benefits than the vitamin K1 you find in leafy green vegetables.

Researchers now suspect that as many as 97 percent of the general Western population may be low in vitamin K2, so adding fermented foods to your diet is an outstanding way to help maintain normal healthy levels.

If you don’t eat fermented soy or fermented vegetables, I recommend adding a vitamin K2 MK-7 supplement to your daily regimen. Far too many Westerners are believed to be deficient in this important nutrient, and unfortunately, there’s no accurate test to measure blood levels to know for sure if you are one of the many who are low.

The Dark Side Of Unfermented Soy

The type of soy that most Westerners eat is not fermented. Few Americans regularly eat natto or its healthy fermented cousins miso and tempeh.

But what’s so bad about unfermented soy?

Soy contains high levels of toxins or antinutrients that can cause gastric distress.

If you’re eating more than 35 grams of soy each day (a single serving of a soy food can contain as much as 20 grams of soy!), this could be a real threat to your health. Excessive amounts of these antinutrients can lead to stomach upset and a deficiency of nutrients, especially amino acids.

These antinutrients include potent enzyme inhibitors that block the action of trypsin, an enzyme needed for protein digestion. When soy is fermented, these compounds are deactivated, so they’re not a concern.

Soybeans contain this potentially harmful substance that promotes clotting in your blood. With too high of levels of hemagglutinin, your red blood cells can clump together and inhibit oxygen uptake and growth.

The good news is, like antinutrients, hemagglutinin is deactivated during the fermentation process.

Soy contains phytates that lead to a mineral deficiency, especially if you are a vegetarian.

Phytates are substances that prevent the absorption of certain minerals, including calcium, magnesium, zinc, and iron. Soy has one of the highest phytate level of any grain or legume studied.

When you also include meat in your diet, it helps reduce these mineral-blocking effects, leaving vegetarians who eat unfermented soy at serious risk of severe malabsorption of minerals.

Soy contains goitrogens that can impact your thyroid function.

Goitrogens are substances that block the synthesis of your thyroid hormones and interfere with iodine metabolism, thereby lowering your thyroid function. When you thyroid becomes underactive, you can experience anxiety, mood swings, insomnia, weight gain, food allergies, and digestive problems.

Soy contains phytoestrogens that can mimic and even block estrogen.

The phytoestrogens or isoflavones in soy include genistein and daidzein. These compounds can disrupt your endocrine function and can even lead to infertility and adverse effects on tissues. 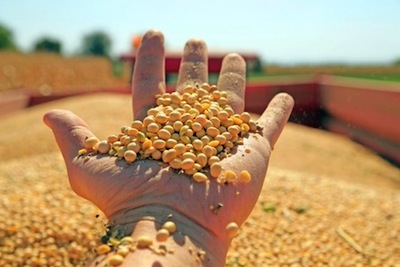 Farmers use nearly double the amount of this herbicide on genetically bioengineered soy compared to non-GM soy, creating a much higher risk of residues in the finished product.

In studies with mice, this genetically engineered soy reduced digestive enzymes. For humans, it’s possible that these findings could indicate an increase in food allergies and digestive problems.

An even greater potential problem with genetically engineered soy is glyphosate, the active ingredient in Roundup. Glyphosate disrupts hormone balance and can lead to infertility, is toxic to unborn children in the mother’s womb, can damage the pituitary gland, and much more.

To summarize, for soy to be a healthy food, it must be 1) organic, and 2) properly fermented.

With a proper, long fermentation process, soy’s phytate and antinutrient levels are reduced, making the soy more beneficial for health. Even though some of the other negatives remain with fermented soy vs. unfermented soy, because you typically eat much smaller quantities of fermented soy, it’s less of an issue.

For more interesting facts and information on the dangers of unfermented soy, check out my free E-book, How to Get the Benefits of Soy Without All the Health Risks.

See also:
Demystifying The Myths of a Plant Based Diet
Fermentation Magic: A Model for Health and Transformation