Figure 8 Whirling Rainbow In The Sky 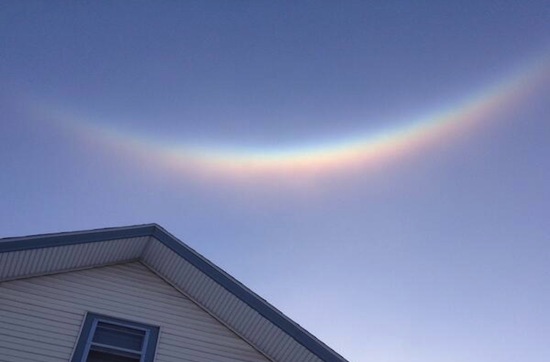 We got about 8 inches of snow last night in Lincoln, Nebraska, and woke up to below-zero temperatures. As the Sun came up it revealed great sparkling beauty.

While shoveling the walkways I noted an unusual Sunbow in the east. I’ve seen lots of single and double Sunbows over the years, but never one like this: it was a traditional, vivid radiant sunbow around the rising Sun, but then there appeared another mirror image Sunbow-Whirling Rainbow above the one around the sun. Together they formed a giant figure 8 sunbow, a giant multicolor lemniscate.

The attached picture shows a bit of the roof of our house, and a portion of the upper sunbow circle. That’s the best image I could manage with my phone camera.

I sounded a chant and stood in meditation for several minutes, as is my custom when beholding the Whirling Rainbow. This is the message that came into my heart and mind: “All will be well. Peace abides.”