Monarch butterflies depend on milkweed and its poisonous compounds that are deadly to most other insects. But a new study finds global warming may be making the very plant monarch butterflies need to survive too toxic even for them.

Their vibrant red-orange wings with contrasting black veins and white dots make monarchs (Danaus plexippus) easy to recognize not only to humans but also to birds on the lookout for a snack. It’s a warning that tells would-be predators an important message: Poisonous – do not eat.

Monarchs get their protective poison from the milkweed plant, which is actually a group of species nested under the genus Asclepias. The great Swedish botanist and founder of modern taxonomy Carl Linneaus named this group after Asclepius, the Greek god of healing, because of the plant’s use in traditional medicine. But milkweed plants also have a deadly side. They produce compounds called cardenolides that are steroids capable of stopping the heart. 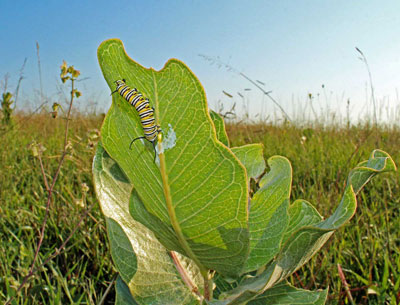 Scientists believe milkweed plants produce cardenolides as a defense against plant-eating insects and other animals. But some species have coevolved around this defense. And some, like monarch butterflies, don’t just cope with these toxins – they’re able to sequester them in their tissue to make themselves poisonous and bad tasting to their own predators.

Because of their unique defense, monarch butterflies are obligate feeders on milkweed, and their caterpillars cannot eat anything else. This relationship is a risky one, and monarchs seem to be paying a price; their numbers have plummeted in recent decades and scientists think it’s due in large part to the reduction of milkweed in the U.S. and Canada from increased herbicide use. (Other factors, like deforestation of monarch overwintering grounds in Mexico, may also be contributing to their decline.)

But now, scientists say they have discovered another threat to monarchs. In a study recently published in the journal Ecology, researchers at Louisiana State University (LSU) put forth findings that indicate global warming may be making remaining milkweed plants more toxic. 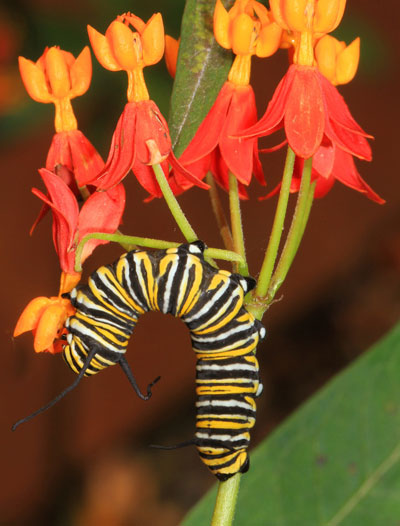 The study found that one of the monarch’s favorite milkweed species, Asclepias curassavica, commonly called tropical milkweed, responds to warmer temperatures by producing more cardenolides. The researchers say that monarchs prefer this species because it tends to have more cardenolides than milkweed native to North America, but that they can withstand these toxins only up to a certain point.

“It’s a Goldilocks situation for monarch butterflies. Too few of these chemicals in the milkweed, and the plant won’t protect monarch caterpillars from being eaten,” said Bret Elderd, associate professor in the LSU Department of Biological Sciences. “But too high of a concentration of these chemicals can also hurt the monarchs, slowing caterpillar development and decreasing survival.”

Tropical milkweed is prized not only by monarchs but by humans as well. With its attractive, long-lasting orange flowers and leaves that don’t shed, gardeners often opt for this species over native species – planting it has even been touted as a way to help monarchs – and it is now widespread throughout the southern U.S. But at current warming trends, Elderd and his team found that tropical milkweed there may get too toxic for monarchs within the next 40 years. Or sooner, if heat waves hit the region.

“If I’m a monarch butterfly, and I’m responding to past environmental conditions, I’ll lay my eggs on A. curassavica,” Elderd said. “But under conditions of global warming, I’ll be doing my offspring a disservice without knowing it.”

This isn’t the first strike for tropical milkweed when it comes to monarch butterflies. Previous research found monarchs that were raised on tropical milkweed tended to change their migration behavior and have higher rates of disease and parasitic infection. 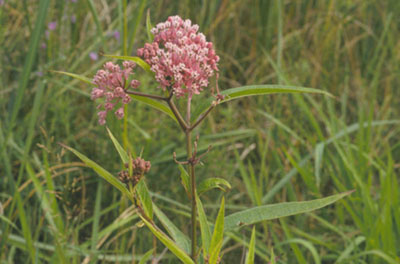 Elderd and his team hope their study will help further understanding of the complex impacts climate change may have on wildlife, and inform better decision-making on the part of conservationists.

“Overall, we have shown the importance of examining how species interactions may respond to abiotic changes due to climatic drivers,” the authors write in their study. “This is particularly true for specialists and their response to global warming.

“Without gaining proper insight into how these interactions shift as the planet warms, we may be unwittingly setting ecological traps.”

This article was republished from Mongabay.

See also:
How We Can All Help Save Monarch Butterflies
Pesticide Reduction: A Goal For American Agriculture