Faced with a growing nationwide opioid addiction, health and consumer advocates say it's time to identify and sever ties with the culprits behind the scourge—pain medication manufacturers and the companies who promote their products.

In Massachusetts, which recently saw a spike in deaths related to heroin overdoses, police and community organizations in Gloucester implemented a new program this year—known as the Angel Initiative—to help addicts get clean in favor of arresting them for illegal drug use.

But on Wednesday, the Gloucester police force added a new effort to the initiative: laying bare the links between opioid abuse and the country's largest pharmaceutical companies.

In a widely-shared Facebook post, the department listed the contact information of chief executives of Eli Lilly, Abbott Labs, Merck, Johnson & Johnson, and Pfizer and encouraged its followers to "politely ask them what they are doing to address the opioid epidemic in the United States and if they realize that the latest data shows almost 80% of addicted persons start with a legally prescribed drug that they make." 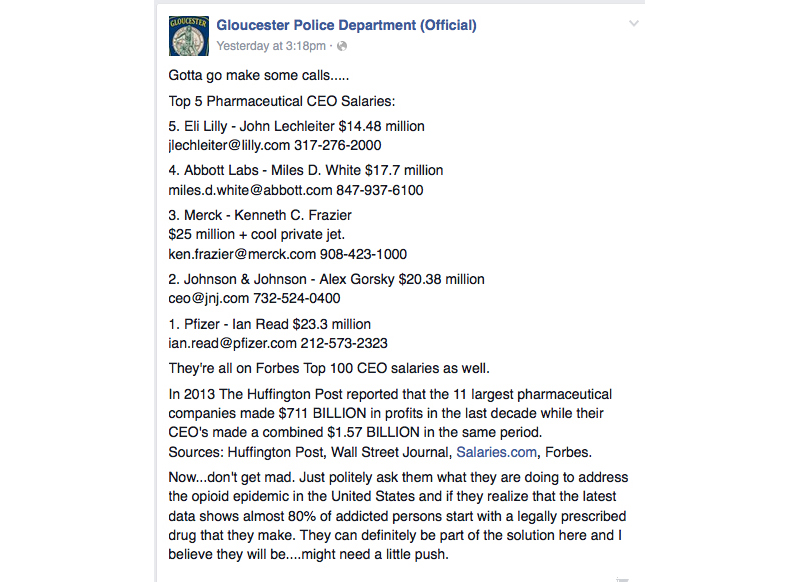 For their part, police said, they would make the same calls.

The salvo came on the same day as consumer advocacy group Public Citizen issued a letter to Congress urging lawmakers to publicize financial ties between medication manufacturers and their promoters, stating that they "may be responsible for the increasing epidemic of pain medication addiction and overdose deaths by promoting misleading information about the medications’ safety and effectiveness."

Dr. Andrew Kimby, executive director of Physicians for Responsible Opioid Prescribing and one of the letter's signatories, explained, "By promoting opioid use for common problems, drug makers and their proxies ushered in an addiction epidemic that will take decades for our country to recover from."

The Senate Finance Committee in 2012 launched an investigation into three pharmaceutical companies and seven nonprofit organizations—prompted by evidence that growing opioid addiction came after aggressive marketing of pain medication—and has yet to release its findings, Public Citizen noted.

"The results of the investigation are not simply a matter of historical importance," said Dr. Michael Carome, director of Public Citizen’s Health Research group. "They are crucial to saving lives because these groups continue promoting aggressive opioid use and continue blocking federal and state interventions that could reduce overprescribing."

Another of the signatories is Judy Rummler, chair of the Fed Up! Coalition, an alliance of grassroots organizations fighting to end the opioid addiction epidemic, who lost her son Steve to an opioid overdose from legally prescribed medication. Rummler called on Congress to release the results of the investigation, which she said "will make it harder for these pain groups to keep claiming their efforts are on behalf of patients."

"The prescribing practices they promote are hurting many chronic pain sufferers, not helping them," Rummler said.

Many in Gloucester said they would follow the police department's lead in contacting the executives of the pharmaceutical companies. "The war on drugs should always have been against big Pharma," said one commenter. "They are the real drug dealers but they line too many pockets with too much."

See also:
Zoloft Has Lawyers Looking At The Dark Side Of Antidepressants
Marijuana Research Supports Its Safety and Benefits