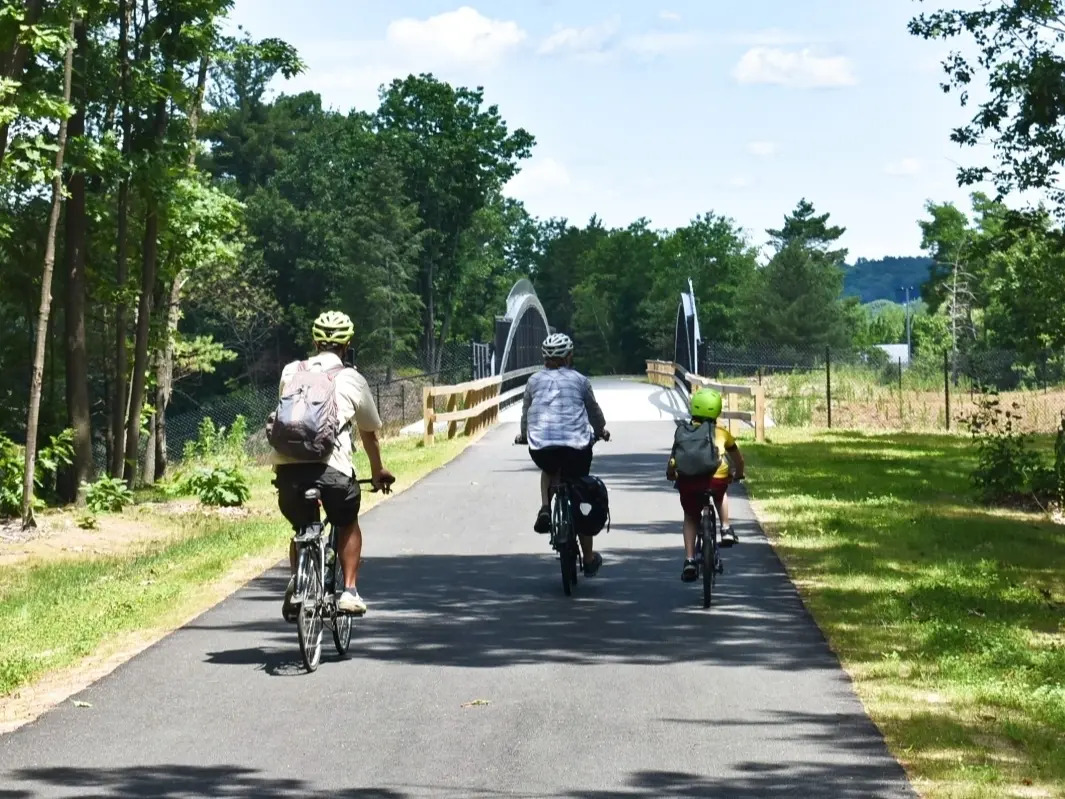 A family approaches a new bridge over Route 2 along the Twin Cities Rail Trail connecting Leominster and Fitchburg. (Neal McNamara/Patch)

The newest rail trail in Massachusetts officially opened in late June, offering a fresh 4-1/2 mile pathway to explore on foot, bike, scooter or wheelchair. The Twin Cities Rail Trail was built on top of the former Fitchburg and Worcester Railroad, which generally runs alongside Route 12 between downtown Leominster and downtown Fitchburg. Planning for the trail stretches back to 2004, but the effort took off in 2017 when the two cities bought the former railway in 2017. The paved pathway officially opened on June 22.

President Joe Biden signed an executive order on Friday that attempts to safeguard at least some abortion access for residents of states seeking to outlaw the procedure. The move comes as Democrats and pro-choice advocates have implored Biden to respond more forcefully to the Supreme Court decision overturning Roe v. Wade. “We cannot allow an out-of-control Supreme Court working in conjunction with extremist elements of the Republican Party to take away freedoms and our personal autonomy,” said Biden in a speech.

Science Confirms It: The More Dogs In Your Neighborhood, The Safer It’ll Be

A new study reported by Ohio State News shows that having more dogs in your neighborhood can make you safer by lowering the overall crime rate. According to researchers, dog-walking isn’t just about getting exercise—it makes us all security guards whether we know it or not. “People walking their dogs are essentially patrolling their neighborhoods,” Nicolo Pinchak, lead author of the study, told Ohio State News. “They see when things are not right, and when there are suspect outsiders in the area. It can be a crime deterrent.”

California has passed what is said to be the toughest law on single-use plastics and packaging waste in the United States. The law, Senate Bill 54, requires that by 2028 at least 30% of plastic packaging in the state be recyclable, with that number increasing to 40% by 2030, and 65% by 2032. The bill also requires a 25% reduction in plastic waste by 2032. The law goes further with polystyrene, requiring recycling to hit 25% by 2025. If the number isn’t reached, the material will be completely banned in the state.

Reparations are an old argument, fought mostly on the national stage. In recent years, however, state and local governments have gotten around the sticky point of who would get money by focusing on descendants of specific latter-day policies, rather than the much broader set of injustices Black Americans have faced since before the nation’s founding. California launched a Reparations Task Force last year, and is compensating survivors of state-sponsored sterilization.