It's the heart that holds the keys to unlocking natural medicine.

I grew up in the 60's on a small dairy farm in Sweden. During hay harvest my grandmother's brother Knut would help out. Knut was a shy and simple man of few words, but whenever we would gather around the table for a meal he would smile and say, "Nu ska vi vara glada for da blir det roligt," which loosely translates to, "Now, let's be happy, because then things will be enjoyable." For a sensitive, asthmatic and serious girl like me, that sounded odd and backwards. How could one decide to be happy I pondered? Waiting for things to be fun so one could get happy made a lot more sense in my young, melancholic mind. But it turns out that uncle Knut was onto something. I don't think the term "intention" was commonly used back then but that was basically what he was talking about. He was asking us to set an intention to be happy. Call me a slow learner, but now, some 45 years later, I get it.

If we look at people who live productive, healthy lives up into their 90's, almost all have certain things in common. A positive outlook is perhaps the most common denominator. Generally this is expressed as being able to contribute and be of service to others, while cultivating feelings of contentment and gratitude. These qualities also build resilience in the face of loss and hardship. Science is now documenting that an ability to manage stress by creating a healthy, life-affirming lifestyle, surrounding yourself with supportive people and looking for what is good in life are just as important as genes when it comes to staying healthy and ageing gracefully.

The field of psycho-neuroimmunology explores the connection between our feelings and our immune system and how stress-producing emotions can create illness. Unprocessed chronic anger, as well as uncontrolled raging, can be especially damaging to the heart. Fear, long term depression and the anxiety of always being in a hurry also take their tolls on the body. These feelings activate the autonomic nervous system, prepare us for fight or flight, restrict the blood vessels and send large quantities of the stress hormones adrenaline and cortisol into the bloodstream. When this happens on occasion no harm is done, but when these autonomic responses become a way of life our physical health can be seriously jeopardized.

The amygdala is the part of the brain that recognizes what patterns of heart rhythm variability (HRV) are most familiar and comfortable for an individual. If a person grows up with a lot of disharmony and discord in the family, he becomes accustomed from an early age to stress-producing emotions and the jagged, erratic HRV pattern that results. Already he is programmed to recreate similar events in his life to maintain that familiar HRV. At the famous heart intelligence/stress management Institute of HeartMath, research demonstrates that certain simple heart-centered exercises done regularly can reprogram the amygdala so that a smooth wavelike HRV pattern, indicating inner peace and contentment, becomes the heart's norm. We used to think we could not rewire our brains, but now we know that when one is focused on feeling gratitude and compassion, over time this builds a happier brain. Whatever we practice gets stronger and eventually carries over into our daily life.

Coherence Draws Love Towards You

So what exactly is it about setting an intention to generate positive emotions that can help to create physical health? The word is "coherence." Positive emotions like loving kindness create an extremely beneficial coherence in the HRV pattern. That means both branches of the nervous system are working together in harmony having a positive effect on all the biological systems of the body. This leads to greater vitality. The brain begins to entrain with the heart, facilitating greater mental clarity, an increase in creativity and intuition, and a sense that it is possible to manage life's challenges with fluidity and grace.

Coherence also aids in pain reduction and makes it easier to sustain emotional balance by producing the hormone oxytocin — the "love hormone" — nicknamed for its ability to induce feelings of calm, peacefulness, and the desire for bonding with and caring for others. Studies show that when we give and receive compassionate touch on a regular basis, oxytocin levels go up in both giver and receiver.

What we call "I" does not stop at the surface of the skin. Each person has an electromagnetic field surrounding the body that reaches out into the world between five to eight feet, sending signals that can be registered in the brain waves of people next to us. Being in a state of coherence sends positive signals into the electromagnetic field around our bodies. The Institute of HeartMath speculates that coherence is responsible for a successful energy exchange between a hands-on healer and client. As the healer shifts into a caring mode, the electromagnetic field around him or her shifts into a higher level of coherence, influencing the client in a very beneficial way. A lower level of coherence eventually shifts, or entrains, to synchronize with a higher level surrounding it. Our physiological systems are interacting in subtle ways all the time. A man I know once said, "All you need to do in life is to create a circle of love around you and everyone will want to be part of it." That's how coherence works.

Using Our Hearts To Retrain Our Brains 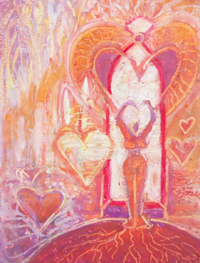 For a long time science taught us that we were isolated, separate creatures and that what you were feeling inside had no effect on the outside world. It turns out this is not so. Most scientists are now in agreement that we are all part of an energetic field, although we still do not have a clear definition of it. Max Planck was the first scientist to identify and speak about this phenomenon in 1944. He called it the matrix. Others have called it the divine matrix, the zero point field, or simply, the field. Scientific studies now imply that when we cultivate happy and peaceful emotions in our hearts, we not only feel better inside, but become agents of healing for everyone on the planet.

The heart went out of fashion for a while when philosophers like Descartes and Newton entered the scene. We fell in love with our prefrontal lobes and the world revolved around logic and reason. Maybe the pendulum needed to swing that way for a while so we would develop the ability to question and inquire and not just gobble up in superstition or blind faith what authorities served to us. But now the heart is on its way back to reclaiming its value as much more than just a blood pump. According to Gregg Braden in The Divine Matrix, measurements of the electric field around the heart show that it is about 60 times stronger than the electric field around the brain, while the magnetic field around the heart is about 5000 times stronger than the brain's.

Spiritual traditions have long held the heart to be the seat of the emotions and the physical home for the soul. Yet, some people have a tendency to deny their hearts, to isolate and hide in their intellects. Drowning uncomfortable feelings in compulsive behavior of any type, or simply putting a lid on them comes at a cost. The incongruence between what you really feel and are pretending to feel creates an inner conflict. The sympathetic and the parasympathetic nervous system fight each other, and just like driving a car with the breaks on, this causes unnecessary wear and tear. Quite often the disowned feelings try to get our attention through various symptoms like back problems, chronic fatigue, migraines and other physical symptoms. Many first-time heart attack sufferers report that they felt out of touch with their feelings for a time prior to the attack. 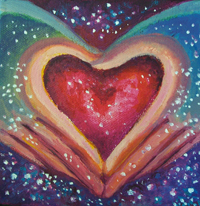 A few years ago I read about a successful artist whose claim to fame was painting very detailed, photorealistic paintings of plants. He supported his family with these paintings and prints of them were sold nationwide. There was only one problem. He had grown very tired of painting this subject matter in this way. You could say his heart was no longer in it. Dutifully he kept painting until one day he had a heart attack that landed him in the hospital. He fell into a depression, which is not uncommon after a heart attack. In order to find his way out he took an honest look at his life and had a courageous conversation with himself and his family. For some time he did not do much of anything since he was recovering from the heart attack, but one day he went into his studio without any particular agenda and started to just play around with the paint, letting the painting reveal itself to him one brushstroke at the time. For a while the images that emerged were vaguely reminiscent of the inside of a heart with networks of something that looked like blood vessels. Eventually, some Japanese-looking flowers started to sneak into these half abstract, expressive paintings and the man's joy for painting was suddenly reawakened. His heart was invested in what he was doing again and did not give him any more problems.

So, it seems that my uncle Knut, as well as many yogis and other wise men and women through the ages, instinctively knew what science now is finally able to measure with high tech equipment: the incredible healing power of the heart. Which brings us to the importance of cultivating the humble quality of contentment, an inside job that requires making a choice to generate a heartfelt emotion of gratitude and appreciation for the sheer miracle of being alive. For so many of us in the western world contentment is a foreign concept, bombarded as we are with advertisements meant to keep us in a constant state of discontent, and continually challenged by ever greater feats of multi-tasking to perform. Most people experience contentment spontaneously when fully absorbed in a single activity of their liking. There is no real emotional satisfaction possible when we are fragmented.

It is late in the game, but collectively I believe we have the power to heal the world we live in using our hearts to retrain our brains. Love is a force to be reckoned with. It is the glue that holds the universe together.

Kerstin Zettmar, a Swedish/American citizen, lives and works as an artist, yoga teacher and holistic bodywork practitioner in Newport, RI. She can be contacted at Kerstin@Zettmar.com or 401-848-0288. Please visit www.zettmar.com.