How Marine Algae Could Help Feed The World

Our planet faces a growing food crisis. According to the United Nations, more than 800 million people are regularly undernourished. By 2050, an additional 2 to 3 billion new guests will join the planetary dinner table.

Meeting this challenge involves not only providing sufficient calories for every person, but also assuring a balanced diet that includes the protein and nutrients that are essential to good health. In a newly published study, we explain how marine microalgae could be a sustainable solution for solving global macro-hunger. 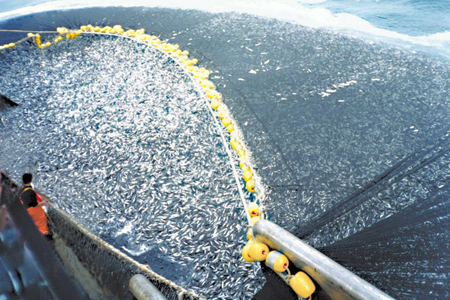 The current Western diet requires vast amounts of land, water and energy, is heavily polluting and is a major contributor to climate change. Providing nutritious food for an ever-growing global population with increasing per capita demand is pushing our current food production system beyond its limits.

Livestock production is replacing forests with cropland and pastures for meat and animal feed. Nitrogen and phosphorous fertilizer used to grow feed grain and other crops is degrading soils and creating biological dead zones in some 400 estuaries around the world.

Fish are an important source of omega-3 fatty acids and essential amino acids that make up our proteins. However, eating fish has some downsides. They can concentrate heavy metals and toxic organic chemicals in their tissues and pass them on to us. Furthermore, most ocean fisheries are overfished or at maximum production.

Aquaculture is producing a growing share of world seafood. But fish farms can have serious environmental impacts, including water pollution, disease transmission to wild fish and habitat destruction. Demand for small ocean fish to feed those raised on farms is depleting wild stocks.

An Alternative Approach: Cutting Out The ‘Middle Fish’ 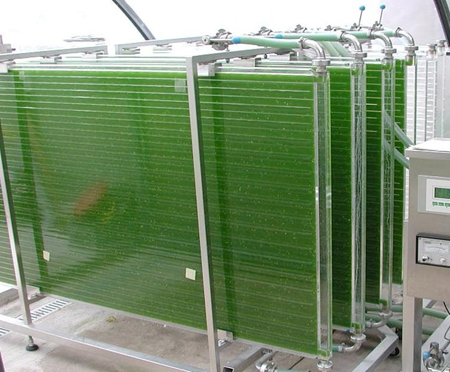 In our paper, we propose an alternative solution: commercial production of marine microalgae as a staple human food and feed for animals and farmed fish. These tiny organisms are the ultimate source of omega-3 fatty acids and amino acids that humans need in our diets, and which many of us get by eating fish. But fish are merely aquatic intermediaries in the nutrition business. We can feed the world more efficiently by “cutting out the middle fish.”

Microalgae are a nearly untapped resource, and are found in both freshwater and marine aquatic systems. Although they are only few micrometers in size, they produce amino acids, fatty acids, vitamins, minerals, antioxidants, polymers and carbohydrates.

For example, the omega-3 rich microalgae Nannochloropsis oculata, or simply Nanno, is a promising potential source of high-nutrient food and feed. It is 40 percent protein by dry weight, of which one-third contains essential amino acids, and 6 percent EPA omega-3 essential fatty acid in a highly bioavailable form.

Only a handful of algal species are used commercially now, but hundreds of strains have the potential to become food and feed sources. Microalgae are currently used as a food ingredient, a food supplement and as aquafeed for fish.

Microalgae are commercially cultivated using several methods that have a range of sustainability footprints. The first is an aerobically fermented system, where cultivation is performed in dark, mixing vessels using sugar as the main energy source for the algae. Algae may also be cultivated in open ponds, using either fresh- or saltwater, carbon dioxide and sunlight. Alternatively, they may be grown in brackish water or seawater in closed, transparent tubes called photobioreactors.

Nanno is currently being grown at a commercial scale using brackish water in outdoor ponds with added carbon dioxide in Texas, and in photobioreactors using seawater and carbon dioxide at a geothermal power station in Iceland. Here sunlight is replaced by efficient LED lights powered by inexpensive, zero-polluting renewable electricity from the power plant.

Photobioreactors require the least amount of water and fertile land. These reactors are like LEGO blocks that can be stacked vertically. Since it is a closed system, this approach minimizes loss of water through evaporation.

One sustainability metric for comparing protein production from animals, plants and marine algae is the amount of land and water needed to produce an equal quantity of essential amino acids from each type of food. We calculate that producing one kilogram of beef-sourced essential amino acids requires 148,000 liters of freshwater and 125 square meters of fertile land. In contrast, producing the same amount from Nanno raised in an open pond with brackish water requires only 20 liters of freshwater and 1.6 square meters of nonfertile land. 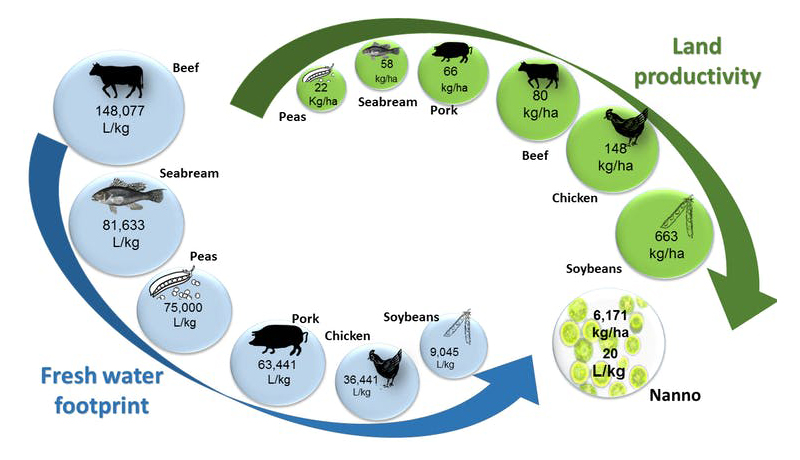 Counterintuitively, some plant protein requires very large amounts of land and water, even relative to some meat sources. For example, peas require about twice as much freshwater and 6.5 times the footprint of fertile land to produce the same amount of essential amino acids as chicken.

How does one eat Nanno? Currently it comes as a soft gel capsule of marine microalgae oil, marketed as an alternative to krill or fish oil as a daily source for omega-3’s. In powdered form, whole algae or algae extract could serve as an ingredient in health bars, sports snacks or pasta. Whole algae, such as Spirulina and Chlorella, are already commercially viable and have entered the market, along with other algae-based products such as algal tea and algal flour.

In its current form Nanno can be used as a protein and fatty acid supplement to improve the nutritional level of undernourished people around the world, and as feed for farmed fish and livestock. Most algae-based products are marketed in the United States as dietary supplements, but we believe the time has arrived to introduce algae-based foods to the dining table. 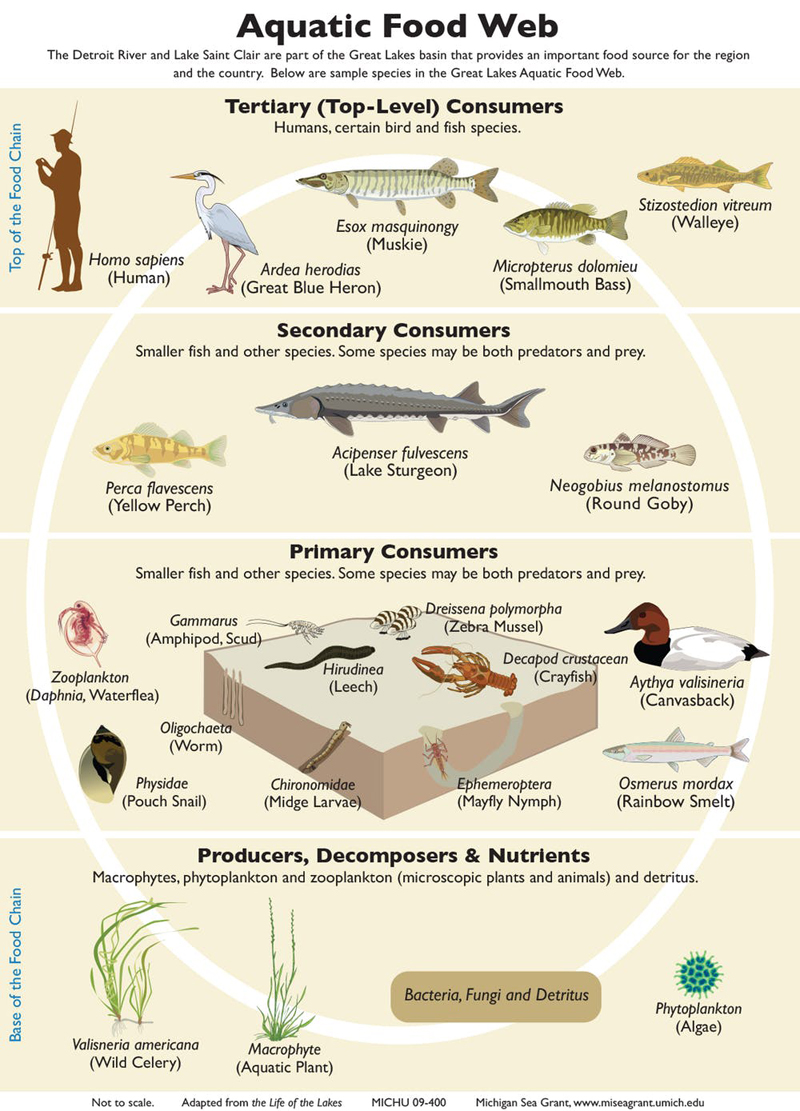 A number of companies already offer innovative alternative meat products, which have the potential to become large-scale food sources with nutritional content and taste comparable to meat. But products based on potatoes, wheat and soy still consume large amounts of freshwater and arable land, with the same environmental disadvantages of current agriculture.

By our calculation, pea- and soy-based alternative meat products with similar nutritional amino acid value to Nanno could be produced using 6.4 times less freshwater than beef, but would require 2.2 times more fertile land. In contrast, using marine microalgae reduces land usage by over 75-fold, since no fertile land is required, and lowers freshwater usage by a factor of 7,400.

Our paper describes a sustainable system for cultivating microalgae that is economically viable. The next step is persuading food scientists to utilize it as the basis for alternative meat products. Chefs and connoisseurs, gastronomes and gourmands, consumers and critics can all help the planet by taking part in a global transition to algae-burgers.

Isaac Berzin, founder and CTO of Algaennovation, contributed to this article.

William Moomaw is professor of international environmental policy at the Fletcher School of Law and Diplomacy, Tufts University, where he is the founding director of the Center for International Environment and Resource Policy, the Tufts Climate Initiative and co-founder of the Global Development and Environment Institute. Asaf Tzachor is a doctoral candidate of Science, Technology and Policy at University College London, and research scholar at Columbia University in the city of New York.

See also:
Could Marine Phytoplankton Be The Future Of Human Nutrition?
Ecover and Method Products Plan To Use Synthetically Created New Life Forms