How Photography Shapes Our View Of Native Americans

Using an early photographic process, one photographer hopes to draw a line connecting what happened to the Dakota people in Mankato, Minnesota, 155 years ago and what is happening today to the Dakota/Lakota standing up to a $3.7 billion crude oil pipeline.

Photographer Shane Balkowitsch’s warehouse is large and dark, except for a few windows filtering the natural light. His studio, in the industrial building where he also runs a medical supplies business near the Bismarck, North Dakota, airport, is lit by lamps that beckon like a bright jewel box. Workers shift merchandise around his photo lab and racks of period clothing as we enter. In his office, Balkowitsch, 47, shows us the glass plate images he creates through an antique technique called ambrotype photography. Image-makers in the 19th century used the wet plate method to capture a ghostly negative on glass. Balkowitsch uses the same tools today.

Balkowitsch used this antique process to document Standing Rock Sioux tribal members and other Native “water protectors” fighting the Dakota Access pipeline. By building on a relationship of trust, he captured these modern Dakota/Lakota warriors in portraits that echo those taken of their ancestors and honor the historic battle for their homelands in the 19th century that continues to this day. He hopes that by sharing these images, he can inspire understanding and healing between Native Americans and all Americans. 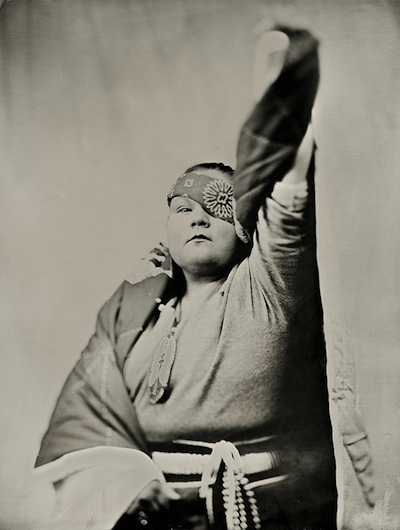 He offers to demonstrate the ambrotype process by taking a photo of my 13-year old son, Joneya Matoska (White Bear Born at Dawn). Taking a photo with an iPhone takes about one-sixtieth of a second, Balkowitsch says. But with ambrotype photography, which requires the subject to hold a pose for as long as 30 seconds, you are taking a short movie of someone’s life.

He places my son’s neck in a metal brace to hold his head still. He assures him that even Abraham Lincoln had to sit with a neck brace like this for his portraits. Then Balkowitsch mixes a silver colloidal solution on a counter in a dark corner of his studio. He returns to load the camera with a light-sensitive glass plate coated in the wet silver. Under the black fabric that drapes the viewfinder, he invites me to see my son’s image upside down.

“That’s what it looks like on your retina, too. Our brains turn the image back the right way,” he says.

As my son holds the pose, I think of the antique photos of our family. One shows Sitting Bull (Tatanka Iyotake) at my great-great-grandparent’s farmhouse on the Yankton Sioux Reservation where he was held as a prisoner at Fort Randall from 1881 to 1883. According to our family stories, Sitting Bull persuaded the Army to allow him to stay with his niece, my great-great-grandmother, during his house arrest. In the photo, Sitting Bull and his wives are seated in front of the house, tipis just off camera. Based on the date, the image was probably taken using a similar technique.

Balkowitsch pulls the plate out of the camera and slips it into a tub of chemicals at my feet. As the image develops, my son’s face appears—darker, more enigmatic than in real life, and his eyes burn like fire, revealing his soul.

“This image of your son will last 1,000 years,” Balkowitsch tells me. 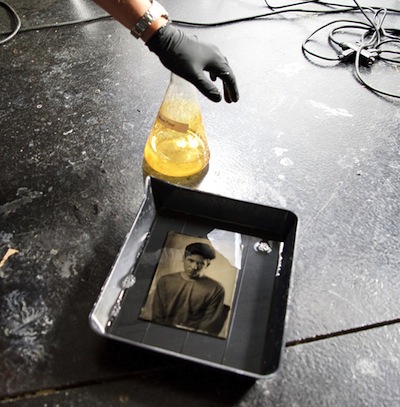 The iconic first portraits of Chief Sitting Bull were ambrotypes, taken by photographer Orlando Scott Goff in Bismark. Inspired by the local historical connection, Balkowitsch asked Sitting Bull’s great-grandson, Ernie LaPointe, to sit for a session. Balkowitsch has since done a series of 60 Northern Plains Native Americans, including Standing Rock Sioux Chairman Dave Archambault II and Dale “Happy” American Horse Jr., who locked himself to Dakota Access pipeline machinery in the August 2016 standoff against the pipeline. Balkowitsch was also the first photographer allowed to take a photo of the protest camp at Standing Rock. He said he was greatly honored that the camp leaders trusted him with this.

Recently, the Library of Congress acquired Balkowitsch’s stark glass negative of Darren Thompson, an Ojibwe flutist and journalist covering the DAPL protests at Standing Rock. In the ambrotype, titled “Death by Oil,” Thompson wears a noose around his neck, and black oil drips down his shoulder. As I hold the negative of the powerful image in the studio, I am struck by the fragility of the glass in my hands.

“Death by Oil” is initially shocking, but the noose and its intimations of death give way to the eagle feather in his hair, a note of grace.

“When I was putting that rope around Darren’s neck, it wasn’t easy,” Balkowitsch said. “He had tears in his eyes during the shoot.” 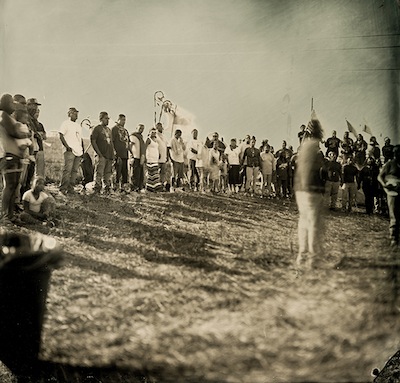 “I had to sit there for an hour,” Thompson said. “I felt I was involved enough that I could articulate the meaning from his [Balkowitsch’s] standpoint and all the people we know mutually and how they feel about the Dakota Access pipeline. I think it’s a pretty powerful statement and powerful experience imagining how the Dakota 38 felt.”

During the winter of 1862 in Mankato, Minnesota, the U.S. government hanged 38 Dakota men, the largest mass execution in American history. The men—memorialized as the Dakota 38—were convicted of taking part in the Dakota Sioux Uprising, which was prompted by the theft of treaty supplies and the subsequent starvation. After the hanging, Dakota people were driven from the state of Minnesota and $200 bounties placed on their scalps by the U.S. government.

When he learned about the hangings, Balkowitsch was forced to confront the profound amnesia that Americans have of atrocities their government has done to Native people. And for those who survived, painful memories like this one, personally reviewed and ordered by President Lincoln less than a week before the Emancipation Proclamation declaring an end to slavery took effect, can be a difficult history to pass on to the next generation.

Thompson, who grew up in Wisconsin, was “confused, upset, and enraged” when he learned about the Dakota 38 in college.

“I consider myself a history buff, and every first-grader learns about Lincoln, but no one teaches about the Dakota 38 and what Lincoln did,” Balkowitsch said.

To memorialize the execution, Dakotan riders participate in the annual Dakota 38 + 2 horseback ride to Mankato, a yearly 330-mile ride from their reservation in South Dakota to the site of the hangings. The riders and their horses annually brave freezing temperatures to arrive at Mankato the day after Christmas. 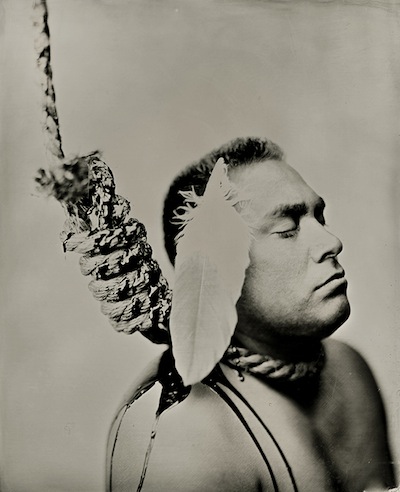 “After I heard about [the] Dakota 38,” Balkowitsch said, “I knew these images [of the hangings] would haunt me until I got them on glass.”

In 1863, the Dakota were driven from their homelands, and bounties were offered for any “Redskin” who returned. This year, with help from social media video, peaceful Dakota/Lakota demonstrators and their allies could be seen defending their sacred sites and water to the rallying cry “Mni Wiconi” (Water is Life) and peacefully facing off against heavily militarized police who spray demonstrators with water cannons in subfreezing temperatures, pummel them with rubber bullets and concussion grenades, and bathe them in pepper spray. This all happened with the support of the government of North Dakota.

“I saw a local woman’s Facebook post saying, I feel sorry for the police officers because they have to sit in the same car with those stinking Indians when they arrest them,’” Balkowitsch told me. “And it was that mentality that allowed the [execution of the] Dakota 38. [Native people] are still here and [Americans] still doing the same things … It scares you to the bone.”

At Balkowitsch’s studio, I stare at the glass plate developing on the floor and think about my son, young and beautiful, staring at the world for generations to come. I think of all of the things that will be remembered and forgotten in those 1,000 years. And I share the hope of Balkowitsch and Thompson that by creating, viewing, and understanding these images and memories, that our two peoples, the Dakota/Lakota and the Americans, can find a peace that is just and good, and one that will give us all a better life. Certainly, one that is better than the one we have endured for 150-plus years.

Jacqueline Keeler wrote this article for The Sanctuary Issue, the Summer 2017 issue of YES! Magazine. Jacqueline is Diné/Ihanktonwan Dakota and editor of The Edge of Morning: Native Voices Speak for the Bears Ears.

See also:
For Native Mothers, A Way To Give Birth That Overcomes Trauma
Wildfires Are Essential: The Forest Service Embraces A Tribal Tradition