How To Feed Ourselves In A Time Of Climate Crisis

Here are 13 of the best ideas for a just and sustainable food system, from saving seeds to curbing food waste.

Changing the food system is the most important thing humans can do to fix our broken carbon cycles. Meanwhile, food security is all about adaptation when you’re dealing with crazy weather and shifting growing zones. How can a world of 7 billion—and growing—feed itself? Here are 13 of the best ideas for a just and sustainable food system.

The world is watching as historic land reforms on the Pacific Island nation of Vanuatu show how to return land sovereignty to indigenous people. The decade-long effort led by Ralph Regenvanu, leader of the Land and Justice Party, is returning control of lands to “customary owners.” More than 80 percent of land in Vanuatu is considered customary: owned by extended families as custodians for future generations.

A benefit of soil regeneration practices, which make soils more fertile and resilient to land degradation, is that carbon from the atmosphere is captured in soil and plant biomass. The Intergovernmental Panel on Climate Change says carbon sequestration accounts for 90 percent of global agricultural mitigation potential by 2030.

The Open Source Seed Initiative was created by plant breeders, farmers, and seed companies as an alternative to patent-protected seeds sold by agricultural giants such as Monsanto. Its goal is to make seeds a common good again, equipping new crop varieties with an open source license. This allows farmers to save and trade seeds and develop their own hybrids for climate adaptation.

Traditional plant varieties are more adaptive than modern hybrids. In Peru, six Quechua communities form the ANDES Potato Park project, which holds about 1,500 varieties of cultivated potatoes. The project not only models seed diversity conservation, but also studies the traditional knowledge, practices, and spiritual beliefs that nurture those resources. 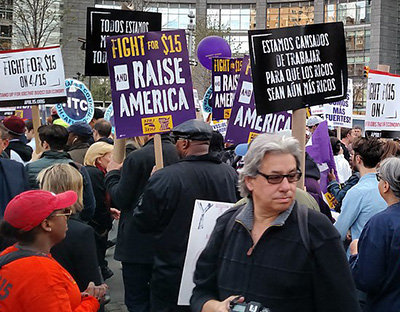 NYC Rally and March to raise the minimum wage in America. © The All-Nite Images from NY, NY, USA via Wikimedia Commons

Agroecology requires skilled labor, yet the worst-paying jobs in the U.S. are in the food system. This makes food and farm labor a poverty issue. Food service jobs are held primarily by women and people of color, making it a social justice issue. Policies addressing these issues would increase wages—which the Fight for $15 campaign wants—protect field workers from harmful chemicals, and treat the migrant labor force fairly.

Scientists in Latin America are tapping traditional farmers for their expertise. “Campesino a Campesino” —translated as “peasant to peasant”—is the cultural model of knowledge dissemination throughout Latin America. Farmers sharing their results and ideas have helped to spread agroecological practices.

Will we quit flying out-of-season produce around the world? Australia’s Food Connect program delivers ecologically and ethically produced fruits and vegetables, dairy products, and bakery items from local farmers to consumer hubs. In Brisbane, door-to-door travel must be no farther than 250 miles, and farmers are paid four times what they would get from big grocery chains.

Low-income people are a large and ready market for farmers. Programs like Double Up Food Bucks make SNAP benefits worth double at farmers markets. In 2013, more than 10,000 first-time SNAP customers in Michigan used farmers markets.

Considering the energy used in daily cooking for 7 billion people, collective cooking and eating should be a goal. Not only does it cost less carbon per plate, but research also shows that where eating is a social activity, people are healthier. 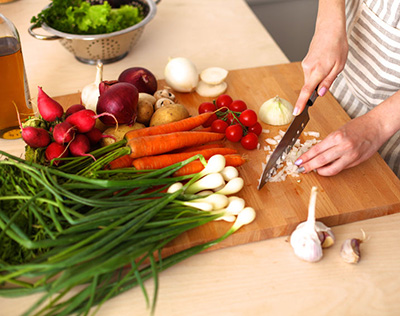 Blue Hill chef Dan Barber, author of The Third Plate and known for his work to use less carbon in the production and serving of his food, argues that our standard plate of dinner should shift from a slab of protein with a side of vegetables to a plate full of seasonal vegetables with perhaps meat in a seasoning or a sauce. Some 30 percent of global greenhouse gas emissions is from industrial agriculture, including deforestation to support livestock.

Total land needed to grow feed just for Europe’s pork industry is the size of Ireland. The U.K.-based Pig Idea campaign encourages feeding leftover catering food to pigs because 40 percent of what farms produce is wasted. Also, the Gleaning Network has in the past four years rescued more than 288 metric tons of produce in Great Britain.

Tracy Matsue Loeffelholz is the creative director at YES!, where she directs artistic and visual components of YES! Magazine, and drives branding across the organization. She specializes in infographic research and design, and currently works with The Nation, in addition to YES! She has previously worked at The Seattle Times, The Virginian-Pilot, Scripps Howard Newspapers, Rocky Mountain News, The Denver Post, The Connecticut Post, The San Diego Tribune, The Honolulu Advertiser. She lives on Bainbridge Island, Washington, and currently serves on the board of the Bainbridge Island Japanese American Exclusion Memorial Association. Tracy speaks English.

Raj Patel is the author of Stuffed and Starved and The Value of Nothing and a professor at the University of Texas at Austin. His work has appeared in The Guardian, Los Angeles Times, and The New York Times.