How You Can Help As Migrant Caravans Arrive At The U.S. Border

These are steps you can take right now to assist the refugees, who have risked everything to escape extreme poverty, gang violence, and political instability at home.

Caravan of Honduran refugees stop over in Mexico City last week. They are now beginning to arrive at the U.S. border in Tijuana. Photojournalist Rob Wilson has been traveling with the caravans from Central America to document the journey of people looking for a better life. See more photos here.

Updated: November 30, 2018
This version reflects the latest needs of the volunteers and the migrants. Click here for updates as new information becomes available.

In the town of Mapastepec, in southern Mexico, poor women are bent over an open fire, making soup for more than 2,000 young Salvadoran refugees who were part of a human caravan bound for the U.S. border.

It was this kind of compassion and open generosity, as the migrants and refugees journeyed through some of the most impoverished towns and villages in Mexico, that floored Kathryn Johnson, who was traveling with them as an American Friends Service Committee volunteer monitor.

“Townspeople, churches, city agencies—everywhere, we saw that kind of generosity,” said Johnson, a policy coordinator with AFSC, a Quaker organization with a mission of service and peacemaking worldwide. “Watching people share the few resources they had, even when they themselves have so little” was moving.

It’s the kind of generosity of spirit that Johnson hopes the caravans of migrants and asylum seekers find once they reach the border.

About 7,000 men, women, and children from El Salvador, Honduras, and Guatemala traveling in these human caravans have called theirs a “movement for the right to migrate.” They are hoping their numbers will raise visibility around the danger and despair that drove them from their home countries in the first place—from extreme poverty and food insecurity, gang violence, political instability, and devastation from climate change. 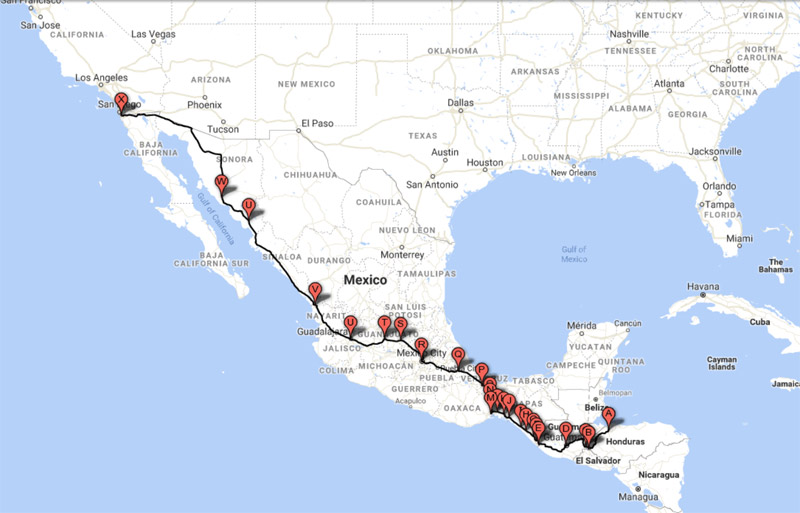 By midweek, the first sizable group had reached the border city of Tijuana, Mexico, hitching rides on buses and trucks on the final leg from Mexico City. Most will wait to make an asylum claim at a designated port of entry.

Meanwhile, the Trump administration has sent thousands of troops to tighten border security in California, Texas, and Arizona. Last week, Trump signed a proclamation to deny the right to seek asylum to anyone not using official ports of entry. The ACLU and other civil rights groups immediately sued, saying federal law recognizes the right of people to seek asylum regardless of where and how they enter the country.

Johnson was in Mexico to serve as a monitor with American Friends, part of a delegation the organization dispatched to meet with refugees and help develop plans for long-term support. 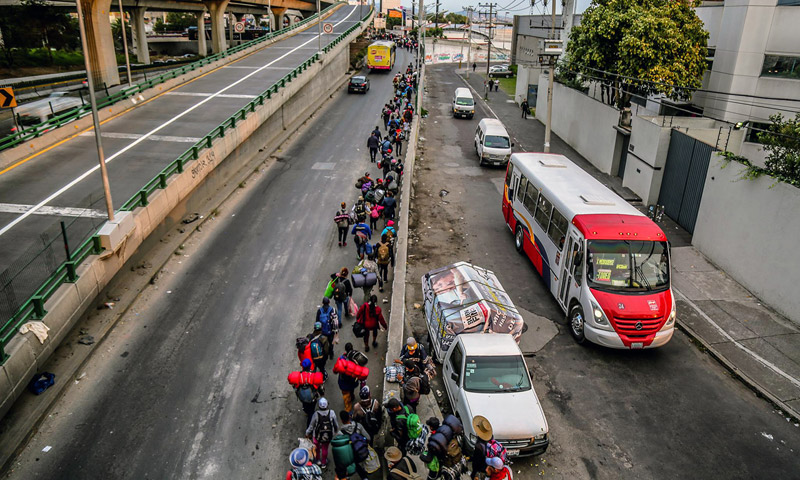 She said many of the refugees she spoke with had heard the hard language of the U.S. president and know about the waiting troops.

“They don’t know what will happen,” she said. “Many of them are quite religious, so they say it’s in the hands of God, or they hope to be able to change the heart of Trump.”

She acknowledged that “changing the heart of Trump” might be difficult. “It would be much more likely if Americans stand with us, if we saw action and advocacy in the U.S., either at the border or in people’s home communities.”

Many of the asylum seekers are families with children who have no contacts in the U.S., no English, and no money. Along with AFSC, a number of organizations and immigrant advocacy groups on both sides of the border are providing assistance, shelter, food, personal supplies, and legal assistance. Many arrived with the earlier wave of Central American asylum seekers this summer—and are still there. Legal advocacy groups are seeking volunteers who speak Spanish, are willing to do pro bono work, and have some experience in immigration and asylum cases.

A number of social justice organizations have planned rallies and protests. School of the Americas Watch is planning a Veterans of Peace-led march to the border wall and a vigil at the Arizona border this weekend.

The New Sanctuary Coalition, made up of faith-based and social justice groups, is creating a Sanctuary Caravan of supporters from the U.S. to meet the Central American caravan in Mexico and accompany them to the U.S.

Now we act & engage in the hard work to save the soul of our nation.https://t.co/pBGz26fVos pic.twitter.com/e9mgroqOsA

Actress and activist Alyssa Milano, whose #MeToo tweet last year helped bolster a women’s movement, has been urging Americans to join the caravan. “Exodus is not new,” Pastor Eduardo Fabian Arias​, one of the movement leaders, says in a statement. “We are called by our faith traditions to welcome the stranger. We will answer that call.”

What else can people do to help?

Donate to an organization providing material support at the border. Amnesty International Americas has been monitoring the situation in Mexico, while UNICEF is working with the Mexican government to provide safe drinking water, hygiene, and sanitation packs as well as assessing psychosocial support and training on nutrition and child protection.

Families Belong Together is one of several groups working with refugees in Tijuana. Learn about their work.

Many local advocacy groups that are providing direct assistance, such as legal services, shelter, or supplies, also need support.

Consider joining the Dec. 10–18 Week of Action, “Love Knows No Borders: a moral call for migrant justice,” event, where more than 100 faith leaders will take part in a nonviolent direct action at the U.S.-Mexico border in San Diego, California. They’ll be calling for humane immigration policies that respect the rights and dignity of all people.

The Kino Border Initiative is a humanitarian assistance, education, and advocacy organization that provides shelter and food to asylum seekers. Its partnership with the Florence Project means those it serves also receive Know Your Rights training as well as some legal representation.

Both are recruiting volunteer pro bono attorneys who speak Spanish, have experience in asylum law and can make at least a five-day commitment at the border.

Donate air miles. Lawyer Moms of America has been contributing airline miles and money to people in shelters along the border, making it possible for those who have achieved asylum to leave and make space for new arrivals.

Volunteer to go to the border. Lawyers for Good Government is looking for volunteer lawyers who can travel to Mexico over the weekend to work with legal services there to provide Know Your Rights and other information to caravan members. They must be able to communicate in Spanish, and have some immigration/asylum experience.

Educate yourself about what’s going on in Central America and about U.S. policies in the region. Seek out credible sources of information about asylum and migration. Have conversations with others about it.

Organize and attend local events and demonstrations in support of a compassionate response to the refugees. Support speaking tours with Central Americans who can address the root causes of forced migration.

Tell Congress to defund hate at the border: Visit the U.S. House of Representatives website and enter your ZIP code to find out whom to contact. To reach your U.S. senator, go to the U.S. Senate website and choose your state.

Lornet Turnbull wrote this article for YES! Magazine. Lornet is an editor for YES!, a Seattle-based freelance writer, and a regional anchor for the Washington Post. Reach her at lturnbull@yesmagazine.org. Follow her on Twitter @TurnbullL.

See also:
15 Actions That Can Shut Down Trump’s Assault On Immigrant Families
The Montana Moms Who Decided Refugees Will Be Welcome In Their City