I Spy With My Eagle Eye 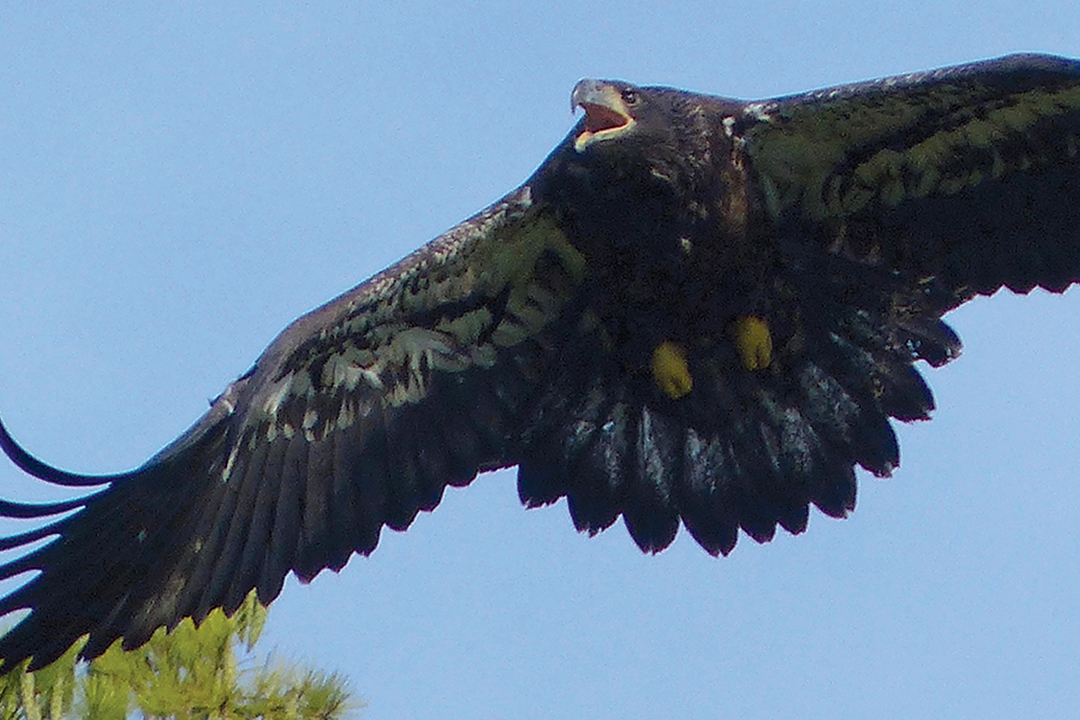 All photos by Trish Whynot

For the last few years, I’ve been following an eagle family in my spare time. It’s about a 30-minute paddle from where I launch my kayak to their nest. With all the heaviness in the world right now I thought it would be fun to reflect on the reemergence of eagles in my area through my photos. I’ve even recorded them calling to each other. 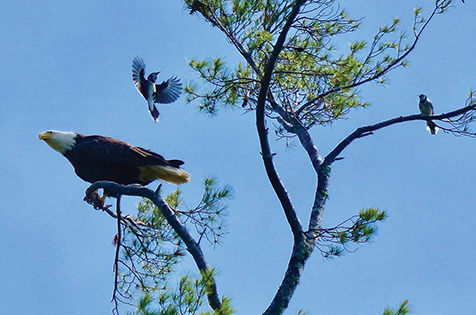 My earliest eagle photo was from 2008 with a point-and-shoot camera. I remember spotting two large birds flying toward the far end of the lake while on a boat ride with my family. I asked if we could follow them. They rolled their eyes at me but I insisted. It ended up being two adult bald eagles and then a third joined them. They dove for fish and put on quite a show for us. This proved to be a rather glorious sighting.

The camera I have now doubles as binoculars. Sometimes I might take up to 100 photos and not quite know what I’ve got until I get back home and load them onto my laptop. That’s how high up in a pine tree the nest is. Plus, I take most of my shots from my kayak. Even if the photo looks sharp on my camera I never know for certain until I get home. There is a thrill that comes with being able to zoom in for a closer look, regardless, like when the eaglets are first born and it’s hard to tell with the naked eye if mama is sitting on her eggs or if there is a chick with her or maybe two chicks. Comparing shots of the nest will show any subtleties of movement to give me clues.

There are a lot of “Where’s Waldo” moments in the area of the nest. Sometimes we find the parents perched at varying stations, silently guarding the nest from afar. When the eaglets get bigger and take flight we listen for their calls while scanning the neighboring trees. We can be looking for 10 to 15 minutes when we hear them and then find them right under our noses. When on the water, it can be challenging to tell exactly where the calls are coming from.

Sometimes I get lucky when they take flight or fly in while I’m watching. And sometimes I end up with a butt shot, but on further examination realize that an eaglet’s been born. That first glimmer of life in the nest is always so exciting!

This is fun stuff for me. It brings forth a feeling I can’t quite put words to beyond awe, wonder, and enchantment. Some days the eaglets are napping and the parents are out hunting when I arrive, so all I get is some exercise. You just never know. Once when with friends, we saw a group of small raptors raid the empty nest. It happened so quickly and caught me by surprise so I didn’t get a photo. I’ve witnessed smaller birds such as crows or blue jays taunting the eagles, giving their location away. I was fortunate to capture some cool shots on one of those days.

Based on my research, bald eagle chicks are called eaglets. Eaglets are nestlings for 10 to 12 weeks. By the time they are nine-weeks-old they are full-grown. At about three to four weeks their feathers begin to change, and around 12 weeks is when they begin flying. Mom is in the nest with them about 90% of the time for the first five to six weeks, and Dad does the majority of the hunting. After five to six weeks the parents spend more and more time away from the nest, perching in nearby trees at first.

Mom is approximately one third larger than Dad, while they both have the same coloring: dark brown with white heads and tails, and yellow beaks. The female’s wingspan can be up to eight feet. It takes a bald eagle between four and five years to get their adult colors including their yellow beaks. Even their eye color changes. They can’t breed until they get their colors. Bald eagle expert, Bryan Watts, says eagles have a divorce rate of less than five percent. Not too shabby! 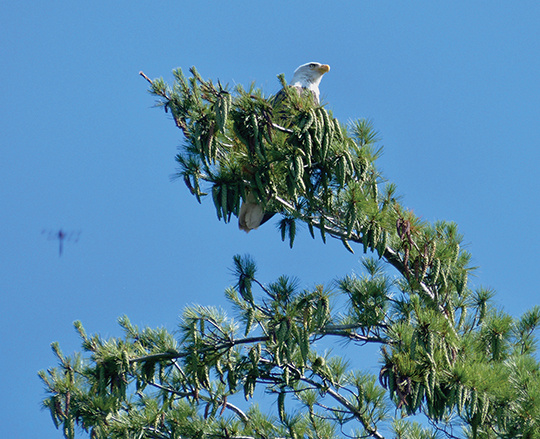 From my experience, although the eaglets are born sometime in April, and by nine weeks are as large as their parents, the adults are still feeding them in late August. It’s always a treat to arrive in the middle of a feeding or training session. The eaglets are pretty awkward on land compared to their parents. They use their wings as training wheels.

As much as I enjoy my visits to the nest area where I’m pretty confident I’ll catch a glimpse of an eagle, one of my favorite experiences is when I’m not looking for one and just happen to look up to find one looking down at me. Viewing my photos on my laptop to find that a dragonfly has photobombed my capture increases my degree of delight exponentially.

I have learned some profound lessons from my eagle friends over the years:

Lesson 1: Years ago, I spotted an eagle high in the early morning sky. I asked if it had a message for me. What I received was, “Don’t be afraid to love. That’s how you come to know God.” Wow! That was years and years ago but I remember it to this day.

Lesson 2: I learned something about trusting my intuition from an eagle. One morning I had decided to get up early and kayak out to the middle of the lake to photograph the sunrise. Or so I thought. I was uncovering my kayak when my intuition said, “Go over to the dock and take a picture.” “But it’s dark, and it’s not even pretty,” I argued. I did walk over to the dock, but I didn’t take my camera out of the case. Next thing I know I hear this rustling noise above my head followed by kind of a woosh, woosh, woosh sound. A bald eagle had been perched directly above my head. As it swooped down right in front of me I wrestled to get my camera out of its case. I missed the shot but at least it landed on the island nearby. I paddled as fast as I could, and it let me take a bunch of photos. Now when I catch myself arguing with my intuition, I burst out laughing — as if I know better.

Lesson 3: I learned this third lesson from my reminiscing. My connection with eagles began as a calling. Nothing bad would have happened if I had ignored it, nor would I have known what I missed. From heeding this call, I know in my bones, the deep soul-level joy that comes from being in tune with that still small voice.

Photography is a hobby for me. Photographing eagles definitely stretches my camera’s capabilities, and as you can see, it has stretched my intuitive capabilities over the years as well. 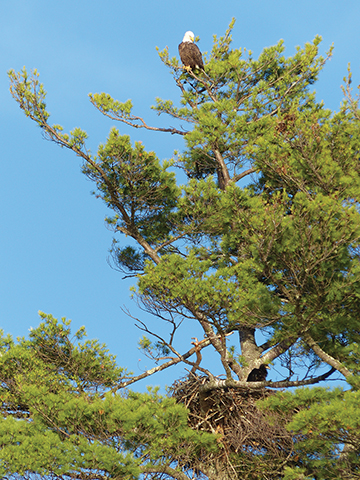 rish Whynot, D.C.Ed. has been practicing holistic counseling for 21 years and has recently completed a Holistic Life Coach Certification. She is the author of “Why Me? Why Now? Why Not? Finding Opportunity in Your Obstacles,” an illustrated guide to living that expects opportunities even during challenging times. Trish utilizes meditation and assistance from the mineral kingdom in her work with clients remotely and in person. Visit her at www.TrishWhynot.com.