In This Food Desert, Kids Learn To Farm Veggies—Out Of The Back Of A Truck

For the past year, the Food Literacy Project in Louisville, Kentucky, has sent its garden-on-wheels to local food deserts, connecting people to healthy eating and changing the lives of young people.

“Has anybody heard of rainbow chard?” Larry Moore asked a group of elementary school children.

“What about this?” Moore asked again, pointing to green leaves emerging from the dirt, their orange base peeking through the brown soil.

But this carrot wasn’t growing in the ground or a pot. It was growing in the bed of a red pickup truck, a garden on wheels known as the Louisville Truck Farm.

“With this, our primary audience is kids, but I’m always in awe at how amazed adults are when they see vegetables growing in the bed of a truck,” said Moore, one of the educators who takes Truck Farm into the community.

For the past year, the 1995 Chevrolet truck has traveled more than 450 miles to visit farmers markets, schools, and community events around Louisville, Kentucky, to show that it’s possible to start a garden anywhere, even in an urban environment. One of these events was a community health fair in West Louisville, which is located within a food desert, an area void of supermarkets or grocery stores that sell fresh produce.

“People want healthy food, but they may not know what it is or where to get it,” Moore said. “But if people see that they can grow stuff in a truck, they can grow it anywhere. They can make better decisions about eating healthier. It’s just about basic awareness.”

Truck Farm is the most recent venture by the Food Literacy Project, a local nonprofit organization with a mission to connect a new generation to food, farming, and the land. The Food Literacy Project’s home base is Field Day Family Farm, an 8-acre agricultural oasis tucked between an interstate highway and a country club golf course. 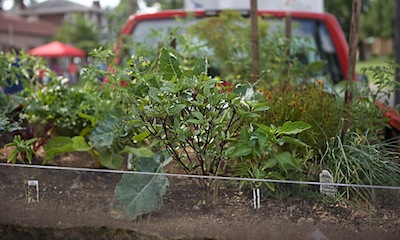 Carol Gundersen and Angelique Perez founded the FLP 10 years ago after a sort of agricultural epiphany. Gundersen said she didn’t discover her love of farming and vegetables until college, when she got a job working on a farm in upstate New York. The experience prompted her to bring her newfound passion back to her agriculturally rich home state of Kentucky. Perez, who has a master’s degree in public health, became interested in organic farming when she realized locally grown food seemed to look and taste better than vegetables from large supermarkets. The FLP was born when Gundersen started working on Field Day Family Farm with local farmer Ivor Chodkowski, who liked the idea of children visiting the farm to learn about the source of their food. Chodkowski was a founding board member, and is still involved with the Food Literacy Project today.

“There is so much work to be done around food and agriculture and health and nutrition,” said Chodkowski, who also owns a farm-to-table restaurant downtown called Harvest. “I believe the Food Literacy Project is an essential tool for moving the ball forward on multiple different fronts, but particularly with kids who might otherwise not have the opportunity to eat well, so it’s amazing to see what kind of impact the FLP has in that way.”

Since its start a decade ago, FLP has partnered with Jefferson County Public Schools, and employs teenagers from underserved areas on the farm every summer through its Youth Community Agriculture Program. Many of the youth involved with YCAP live in the West Louisville food desert, and have never set foot on a farm before.

“We really try to reach those youth and families who have never been to a farm, or never had the experience of harvesting something and eating it,” said Perez, FLP’s associate director. “There’s some neighborhoods in Louisville where families face significant health disparities and the life expectancy is significantly less than the Louisville Metro average.”

Food deserts are an epidemic all over the country, leaving huge islands of people without access to fresh and healthy food. According to the Department of Agriculture, 23.5 million Americans live in food deserts, including 6.5 million children. These areas are littered with fast-food chains and gas station quickie marts, which means residents’ most convenient choices are processed foods that contribute to life-shortening health problems such as obesity, diabetes, and heart disease.

The launch of Truck Farm in June 2015 brought an alternative approach to reaching the youth of Louisville.

For example, in Louisville, the average life expectancy is 77.4 years, according to the Louisville Metro Health Department. However, in West Louisville neighborhoods that are located in a food desert, life expectancy is shorter by as much as a decade: an average of 68.9 years. It’s also about a decade shorter than the national average, which is 78.7 years.

The launch of Truck Farm in June 2015 brought an alternative approach to reaching the youth of Louisville. In the warmer months, the truck boasts as many as 40 different plants in its bed so that visitors can experience a variety of sights, smells, and tastes. The truck bed is roughly 7 1/2 feet by 5 1/2 feet and opens to reveal a plexiglass tailgate, which allows people to get a visual of what’s going on beneath the soil. While dozens of school field trips visit Field Day Family Farm every year, Truck Farm gives Gundersen and Perez a mobile tool to reach even more people.

“It exposes people to where their food comes from. It invites them to learn by discovery and to ask a lot of questions and develop a sense of wonder,” said Gundersen, executive director of FLP. “What will stay with a young person more than any information we could give them is an experience. For us, the hands-on approach is absolutely crucial. Truck Farm has been such a great resource to take the farm to people, and it’s also visually interesting and unique in this community.”

In March 2015, FLP landed unexpected international recognition when Camilla, Duchess of Cornwall, toured Field Day Family Farm during a stop in Louisville because of her interest in organic farming. The royal visit inspired two donors to launch a campaign that would raise funding to make FLP’s idea of Truck Farm a reality.

Before its unveiling three months later, Truck Farm was planted by the group of teenagers participating in YCAP. These teens did the bulk of the work to get Truck Farm ready for its debut at a Whole Foods store. They filled the truck bed with soil, tested the soil’s pH, measured the plots within the bed, and, of course, planted the vegetables. 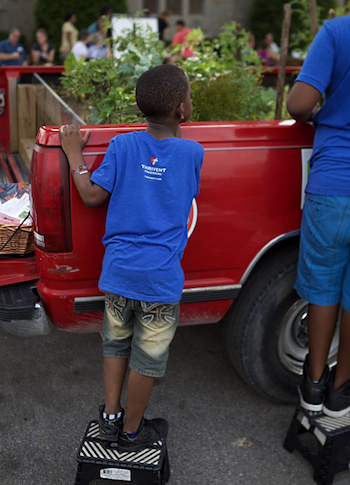 One of the youths involved in Truck Farm’s planting was DeAndrae Hughes, who works for the FLP, and is a passionate ambassador for its mission. As a YCAP alum, he mentors the current participants, and speaks at FLP fundraising events to share his story about the change FLP had on his life. Before getting involved with YCAP, Hughes said, he frequented fast-food restaurants and ate a lot of frozen meals. Now he says he makes healthier choices, shared recipes with his foster family, and feels better physically.

“Before I had problems with malnutrition,” Hughes said. “I had no idea about what it really meant to eat healthy. The Food Literacy Project saved my life, so to speak.”

Hughes said he plans on starting a garden at his church, and also wants to have his own garden once he has a place of his own. “You can grow a garden anywhere there’s a will to grow a garden,” he said.

David Mulungula, a 16-year-old who participated in YCAP for the first time this summer, said working on the farm was the best thing he has ever done. As a West Louisville resident, he hopes to make a positive impact on his neighborhood through spreading awareness about healthy eating and food justice issues.

“West Louisville doesn’t have a lot of healthy and affordable food around the area, and I know that because I see it every day,” Mulungula said. “It’s good that I came here because I want to make a difference, and I got to be around people who actually are making a difference.”

Mulungula said he also appreciates traveling around the community with YCAP to visit organizations that have similar goals to FLP. One of those organizations was the Hope Community Farm, a 7-acre garden maintained by refugees in South Louisville.

The job is even more rewarding, Perez said, when she sees YCAP crew members like Hughes and Mulungula embrace the things they’ve learned at the farm.

“Seeing our YCAP crew, our teens, be a part of constructing Truck Farm, and not just putting it together, but taking that message on the road, and being ambassadors for other people is just so powerful,” she said. “I realize, as a staff member at FLP, this is what our mission is all about. It’s not just about getting people to eat more healthfully, but to engage people in transforming their local food systems.”

Rachel Shulhafer wrote this article for Yes! Magazine. Rachel is a video editor and freelance writer who specializes in environmental issues. She holds a journalism degree from Ball State University, and is based in Louisville, Ky.

See also:
15 Ways To Donate 15 Dollars To Build Food Justice Right Now
Urban Farming Is Booming In The US, But What Does It Really Yield?