Innovators Look To “Accidental Crops” As A Nutritious, Environmentally Friendly And Free Source Of Food

Philip Stark was on a long run in the hills above Berkeley, California, when he started thinking differently about the wild green plants around him. “I knew some that were edible,” says Stark, a statistics professor at the University of California, Berkeley. With research interests in nutrition and health, he wanted to learn more about these edible plants and find out which ones could be foraged for food. “Once your brain starts to notice the environment that way — once plants are not just an undifferentiated sea of green — you see the plants everywhere.”

Edible wild greens are consumed globally, particularly during food shortages, and many are used medicinally in teas, poultices and supplements, Stark learned. But he found little about their nutritional qualities. Living in the San Francisco area, he started wondering if plants growing wild in cities — not just on the trails he ran and other less urban environments — were safe to eat. If some of them were, and if they were nutritious and free from pollutants, he wondered if foraging could potentially help combat food insecurity in cities, boost public health, and — because he lived in earthquake country — boost communities’ disaster resilience.

Stark and his research team set out to find answers. In a new paper, which has not yet been published in a peer-reviewed journal, they described what they found, including: Wild greens grow abundantly in poor industrial regions of San Francisco, even surviving droughts; the six most abundant greens tested had nutrients rivaling that of cultivated kale; and after the wild greens were rinsed in water, levels of pesticides, PCBs and heavy metals were well below doses considered safe by the U.S. Environmental Protection Agency. The group has documented 126 edible species of wild food in the area so far.

While wild greens have been ignored and even vilified, domesticated greens have been bred for several traits — such as sweetness, yield, shelf life and visual appeal — that can compromise their nutritional value. Not only did the tested wild species feature generally higher vitamins and minerals than cultivated kale, they were full of phytonutrients, compounds that may help reduce ailments like cancer and heart disease.

Stark’s research complements evidence of nutritionally superior fruits from abandoned orchards and gardens, growing wild in the Boston area. Those findings follow other studies that find high nutrient concentrations in wild edible food — although there isn’t much information to go on.

“Despite the growing recognition that foraged foods are a component of urban food systems and urban ecosystems, surprisingly little is known about their safety, nutritional value, or availability,” Stark and colleagues wrote in their paper.

Beyond potential to be a nutritious and free edible resource, wild food offers several ecological benefits.

The evidence that is available for safety is mixed. While the wild greens in San Francisco had heavy metal content well below levels considered safe for consumption, some research shows that a few species have higher levels of contaminants when growing near major roadways or in rural areas. On the whole, research suggests that trace metals accumulate the least in legumes and the most in leafy greens, with root vegetables somewhere between.

“If I had my way,” Stark says, “municipalities would levy a one-time parcel tax — probably less than [US]$50 — to test the soil at every address for heavy metals and relevant industrial and agricultural contaminants. Then they could publish maps of where it’s safe to grow or forage food.”

Beyond potential to be a nutritious and free edible resource, wild food offers several ecological benefits. These accidental crops don’t need to be cultivated or watered. They’re abundant in farms, gardens, sidewalks and median strips on public and private land. Those that are natives are well adapted to local ecosystems and their biodiversity. The hardy plants have thrived despite disruptive human activities and environmental extremes, and because they are close to where people live, there is no concern about associated “food miles” and the emissions that go with them.

The advantages are apparent to Stark, both in urban and rural areas. “They are essentially universally available and free, so equity and access are clear,” he says. And “embracing them as edible cover crops would be expected to reduce erosion on farms, attract pollinators, and improve farm biodiversity and soil health.” But, “convincing farmers that there is a market for what grows between the rows” is a challenge, Stark says.

Another challenge to widespread (re)adoption of these foods is financial constraints to continue the scientific work, Stark says. “It’s hard to get funding for this sort of thing, and tests for nutrition and toxicology are expensive.”

Foraging laws can present one more obstacle — in some places it’s illegal to pick plants from public land. Food law and policy expert Baylen Linnekin is dedicated to improving America’s inconsistent and often conflicting foraging restrictions — many of which he writes are “wrongheaded and draconian.”

There have been reported instances of people getting in trouble with law enforcement for picking dandelions in Chicago and New York, while another forager was penalized for picking berries from a suburban park in Washington, D.C.

Some foraging laws are in place to protect local ecosystems. So would-be urban foragers are cautioned to make sure they understand foraging etiquette and local laws. 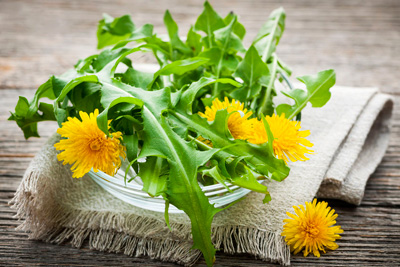 And it’s also important to understand local plants, says Australian gardening expert Kate Wall. Although some weeds like dandelion and purslane grow around much of the world, others are specific to local areas.

“So, to really get the best out of what’s available to you locally, source your information locally,” she advises. “There are local courses springing up in capital cities everywhere.”

But there’s the issue of whether people would even want to eat what they consider weeds if they could. Stark says it comes down to familiarity: People eat what they recognize and are comfortable with. For those wanting to broaden their culinary horizons into urban foraged food, he recommends taking a class from a local expert. Then make a list of plants — and parts of plants — that you know are safe. “Start with one plant you know is edible and bring some home for dinner,” he suggests. Then gradually add more species to your diet.

Wall has been eating edible wild greens since she was a child. She now runs regular educational workshops in Queensland, Australia, where participants forage and then have a meal together “based on weeds,” she says. Meanwhile, Stark’s team offers an annual “Wild/Feral Food Week” to showcase the gastronomic opportunities offered by wild foods and entice people and chefs to become more familiar with them.

Natalie Parletta is a freelance writer and an adjunct senior research fellow at the University of South Australia. Qualified in nutrition and psychology, she spent ten years researching links between them. Now at large, she writes about topics spanning science, health, people, animals and the environment. twitter.com/NatalieParletta

See also:
10 Reasons You Should Start Foraging For Your Own Food
Urban Foraging: Weeds You Can Eat