Maya Midwives As Social Workers In A Machista Society

In Guatemala, the midwife’s role goes beyond ‘catching babies’

The doorbell rang late in the afternoon at the ACAM center and a young woman came in. Her swollen belly was visible just under her woven skirt, which was tied above with a hand-loomed belt in a floral multicolored pattern. A small girl, about 18 months old, clung to her mother’s skirt, hiding as I tried to catch her eye. Walking in next to the mother was an older woman, her mother-in-law, and the young father of the 18-month old child. His acne spotted face was grim as he followed his wife and mother-in-law into the consult room.

The family began speaking rapidly in Mam, the local Mayan language. I do not understand Mam, but I could tell that something was very wrong. Imelda, the covering midwife, explained to me that the young mother was only seven months pregnant, but was having pains. She then examined the woman and found that she was already two centimeters dilated. There is more to this story, though. The young mother confided that she had been hit by her husband— he was abusing her verbally and physically.

The most recent abuse had to do with his anger over his wife’s request to help her wash some large, heavy blankets. “I am not a man to do woman’s work,” he replied. He defiantly lashed out in front of all of us: “Hey! If she doesn’t like it, she can leave and I will have another woman by tomorrow.”

Machismo and domestic violence are firmly entrenched in this culture, as it is in so many places around the world. Imelda spoke seriously to the husband, the young mother, and the mother-in-law. “This baby is in danger. You all need to go to the hospital,” Imelda said. Despite questioning Imelda and her diagnosis, the father eventually made some phone calls and they were on their way to the hospital. 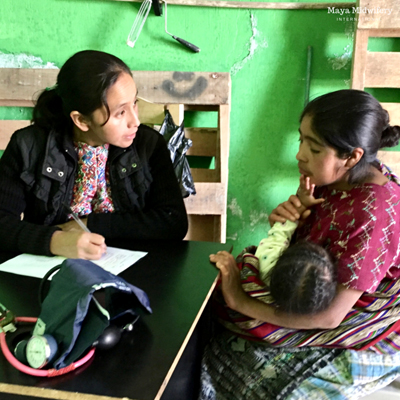 After a couple of days, they stopped by the ACAM center on their way home— the young mother still pregnant. The hospital discharged the mother on bed rest and, apparently, the staff had threatened the father with legal action because he was much more subdued and humble during the second visit. Imelda spoke sternly with the husband: “You will cook, clean, wash, sweep, and not allow your wife to do any work, and be sure that she is not stressed. This you must do to be sure that this baby makes it to the full nine months and that this pregnancy is healthy, if not, it is on you if something happens.”

It is humbling to watch these midwives work and to realize the odds they face as women trying to support other women in a machista society. Though I asked about the potential for jail time, it isn’t always the best option here. I was told that when the men get out of jail after several months, they are likely to become even more abusive and the women even more vulnerable.

The role of the midwife in Guatemala is so much more than just a clinician. People listen to the midwives because they are deeply respected. Their care is holistic and they are a trusted confidant, thus the midwives are often able to get at the root of problems and engage the family in solutions.

As the young mother was leaving the ACAM center, she told Imelda that she wanted her to be there when she had the baby. The young mother deeply appreciated the emotional support she had gotten from Imelda and, at least for now, the relief from an abusive husband that had been chastened by the midwife and the hospital staff.

The goal of Maya Midwifery International is to improve maternal child health outcomes by helping to prepare and sustain local midwives in their communities and helping them to have a voice in local and national policies which affect them.

This article was republished from Maya Midwifery International.

How To Prevent Social Isolation And Decrease Loneliness In The Elderly

Can We Unlearn The Fear That Creates Our Reality?

Planetary sign changes and direction shifts herald continued uncertainty. Mental Mercury enters Scorpio during the early morning hours. Thinking usually becomes more focused and fixated during this transit but not so this time…