Protecting Crops With Predators Instead Of Poisons

By luring predatory birds to farms, farmers can reduce the need to use poisons to keep insects, rodents and other pests in check.

Cedar waxwings, American robins and other birds alone cost the state’s tart and sweet cherry growers more than US$4.3 million a year. To protect their bottom lines from nuisance birds, fruit farmers deploy a quirky arsenal.

Since the early 1990s, though, some local orchardists have had better success by enlisting natural helpers with real bite: American kestrels, small falcons that eagerly move in when farmers put up nest boxes and prey on a range of agricultural pests. For farmers, the predators provide an important service on the cheap. And for kestrels — North America’s most widespread falcon, but a species whose numbers have plunged by nearly half in the past half-century — the setup provides a cozy home and ideal habitat.

Cherry growers aren’t the only ones forming avian alliances. In a recent paper in the journal Agriculture, Ecosystems and Environment, Michigan State University (MSU) scientists reviewed past research and concluded that farmers who add structures or manage their land to attract birds, bats and other vertebrates can boost profits, reduce pesticide use and conserve vulnerable wildlife.

“There are species out there that, particularly when they live in agricultural landscapes, are providing services for us, and sometimes we’re not even aware of them,” says Catherine Lindell, an MSU biologist and lead author of the paper. “The more we understand about these services they provide, the more we might be able to enhance those services by giving them the resources they need.”

From New Zealand To California

Lindell and her co-authors note several examples. When scientists introduced a threatened, native falcon species to New Zealand vineyards, the raptors drove off 80 percent of non-native pest birds and reduced the number of grapes removed by 95 percent, saving some vintners more than US$300 per hectare. Other research suggests that European kestrels and barn owls might help control rodents on Spanish farms. 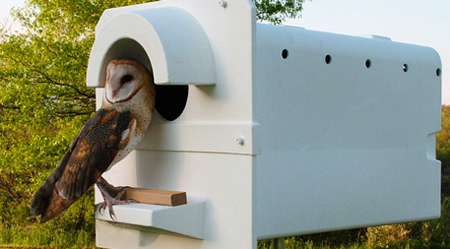 Raptors aren’t the only birds with pest-control benefits: Adding nest boxes for great tits, a small songbird, cut caterpillar damage in half on some apple orchards in the Netherlands; areas near bluebird boxes on a California vineyard had significantly fewer leaf-eating insects.

Other researchers are investigating ways to manage overall agricultural landscapes to attract beneficial birds. Studies show, for example, that weaving natural habitat like hedgerows into farmland can lure birds that gorge on harmful insects.

Since 2012, Lindell and graduate student Megan Shave have been working to better understand the role raptors can play in supporting Michigan’s fruit industry. Preliminary results show pest birds are significantly less abundant in kestrel-guarded orchards. They say the avoided crop damage is enough to generate US$2.2 million a year in additional revenue if all the state’s sweet cherry growers added nest boxes.

Unlike balloons or loud noises, kestrels are a genuine threat whose mere presence is enough to scare off pest bird flocks, says cherry grower Jim Nugent, who installed a nest box on his roughly 40-acre (20-hectare) Suttons Bay, Michigan, orchard in the mid-’90s. It has been occupied almost every year since.

“Our problems with birds have really dropped off,” he says. “They [kestrels] are quite effective, and it doesn’t require much management on the grower’s part.”

The idea isn’t new; the U.S. Department of Agriculture established an “economic ornithology” unit in the 1880s to study birds for pest control. But that body was disbanded in 1940, around the time synthetic pesticides like DDT were hitting the market and being hailed as wonders for controlling insects that spread disease and ruined crops.

By the 1960s, scientists were beginning to understand the serious ecological effects of those chemical compounds. Rachel Carson’s landmark 1962 book Silent Spring detailed how DDT built up in birds and made their eggshells too thin to protect chicks, and its title raised the prospect of a future deprived of birdsong. A decade later, DDT was banned, and populations of raptors and other birds began to rebound.

But other pesticides hit the market. More than 1 billion pounds (500 million kilograms) of pesticides are used in the U.S. each year, and more than 5.6 billion pounds (2.5 billion kilograms) are used globally. Scientists increasingly point to potential health hazards of this widespread use — as certain pesticides have been linked to genetic changes, cancers, endocrine disruption, nerve disorders, mental health issues and reproductive problems.

In response, some food producers and researchers have grown more interested in the on-farm benefits birds can provide.

At this point, it’s not clear how much pesticide use could be offset by partnering with natural predators, says Lindell, who describes beneficial birds as “one tool in the toolkit” of an integrated pest management approach. 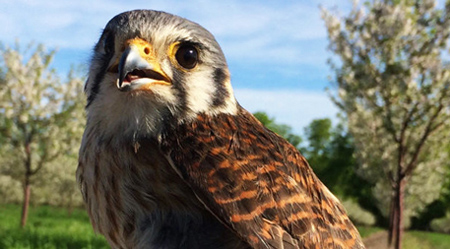 However, she and others caution that if farmers are drawing in predators, they should avoid toxics to control pests, since the poisons can work their way up the food chain and kill birds and other animals. A study by the state of California found that three-quarters of raptors, bobcats, coyotes and other wildlife tested positive for rodenticides.

“People love to think that we’ve got to have poison in the toolbox, and we say you can’t have both,” says Lisa Owens Viani, director of Raptors Are the Solution, a California-based project of the nonprofit Earth Island Institute that works to stop rodenticide use. “We think it’s unfair to put up an owl box and lure an owl to a place where there’s poison being used. The bottom line: Do we want them to help us control rodents, or do we want to poison them?”

Owens Viani says that, at least in some cases, raptors alone are enough to control rodents. She pointed to a recent study by California’s Ventura County Watershed Protection District, which works to control burrowing rodents that can degrade levees and dams. In findings published last December, the agency reported that levee sections where workers had installed perches to attract raptors had substantially less damage from ground squirrels than areas treated with rodenticides. The report called for replacing the poisons with raptors systemwide, noting that the county would save US$7,500 a year for each mile of levee.

In another California study, barn owls essentially formed a colony at a research site after nest boxes were installed, with the population at one point reaching 102 owls on a 100-acre (40-hectare) vineyard. The birds killed more than 30,000 rodents over the course of three breeding seasons, for a fraction of the cost of trapping or poisoning them, says lead researcher Mark Browning, a biologist formerly with the Pittsburgh Zoo who now owns the Barn Owl Box Company, which sells the nest boxes.

That suggests, at least in some situations, natural predators could make rodenticides unnecessary, he says.

“The wonderful aspect of utilizing an animal such as the barn owl is that they do their work without any prodding,” Browning says. “You don’t have to wake them up in the morning or tell them they’re not moving fast enough that day. And the pressure that barn owls exert on a population is unrelenting, particularly at the very time that rodents are building their numbers.”

As a retired district horticulturalist for MSU’s agricultural extension service, Nugent says kestrel nest boxes are one reason he’s seen his fellow growers easing off of rodenticides to kill voles, mouselike rodents that can kill fruit trees by gnawing on their bark and roots.

Migrating kestrels should return to Nugent’s farm in a month or so, where they’ll find fresh wood shavings he added when he cleaned out the nest box in the fall. That annual chore is pretty much the only upkeep needed to keep his winged workers on the job. “It’s not a very big project,” he says. “There just isn’t a downside.”

Andy McGlashen is a freelance journalist based in Michigan. He is a past editorial fellow at Audubon magazine and a graduate of the Knight Center for Environmental Journalism at Michigan State. His work has appeared online in Sierra, Scientific American, Civil Eats, Midwest Energy News, The Daily Climate, Environmental Health News and other sites, and in newspapers around Michigan. twitter.com/AMcGlashen

This article was republished from Ensia and originally appeared at Environmental Health News.