Bringing back a keystone species 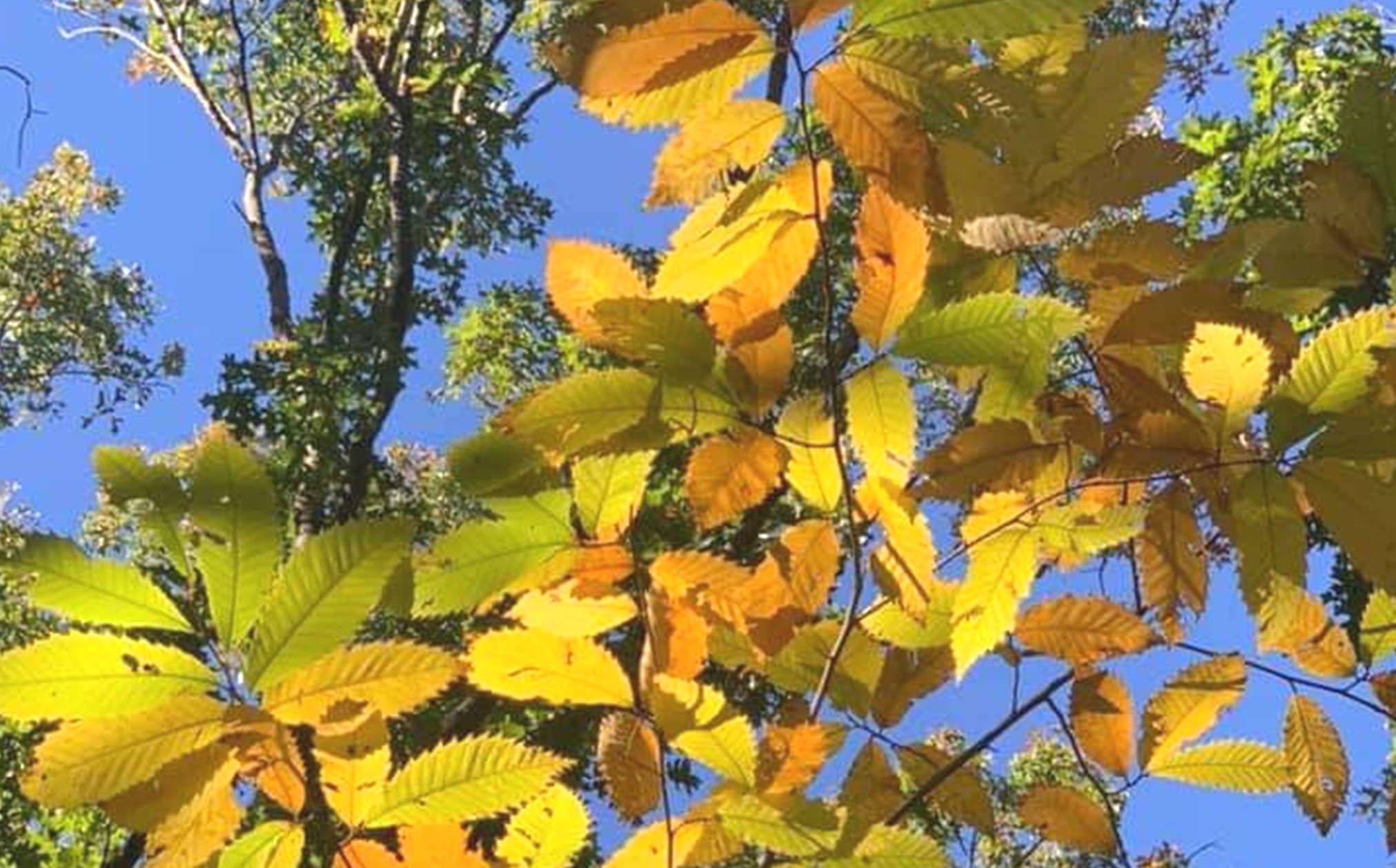 An American chestnut resprout on Long Island, NY. This is most likely a remnant of what was once a healthy tree a century ago.

Imagine a woodland of towering trees, some over one hundred feet tall with trunks up to fifteen feet across, and a thick layer of delicious nuts blanketing its floor. The creatures bustle about, gathering as much of the precious food as they can. Allegheny woodrats and other rodents add chestnuts to their winter caches, bears have a buffet, flocks of passenger pigeons and wild turkeys hurriedly gulp them down, and even humans could be seen collecting basketfuls of this rich source of nutrition.

This would have been a common scene in parts of the Eastern United States, where the American chestnut (Castanea dentata) trees were once a keystone species in our forests. A chestnut blight was introduced to North America in the early 1900s with the importation of Japanese chestnut trees, and by the early 1940s, the fungus had killed virtually all native American chestnut trees in the United States and Canada. Antinanco is a non-profit organization based in Holmdel, New Jersey, and our community of families, friends, and volunteers is helping bring these and other native food-producing plants back to our forests.

The original idea was to hold a tree planting workshop for kids, and focus on restoring trees which both needed help in repopulating,

and which could add the greatest value to the ecosystem. The American chestnut was chosen not only because of its unfortunate demise and functionally extinct status, but its great potential to help feed our dwindling wildlife populations and possibly even people, as it did long ago. The inspiration to choose a tree with this potential comes from the examples that our indigenous brothers and sisters have set for us, which show that the land can be gently cared for in a way that creates habitat for a diversity of life, by intentionally cultivating native plant species in order to feed this life.

In November of 2018, amidst a blanket of fresh wet snow, a group of roughly fifteen children, adults, and a cute dog named Gigi set out upon a rustic farm in Eastern Pennsylvania to plant chestnut seedlings. Under the leadership of Joseph Resch, who assumed the position of the American Chestnut Revival Project Leader shortly thereafter, the group planted twenty-six trees with love and careful intent, named, and protected them from deer with funny-looking white plastic tubes. The seeds, or rather, seedlings, were sown. Though this was just one activity in a weekend-long event focused on practicing and preserving Earth-centered traditions, it was soon to grow. After experiencing firsthand the enthusiasm of the participants and volunteers, it became clear to the Antinanco team that expanding on the program was inevitable and would be of great benefit to all.

There are no fully chestnut blight-resistant seeds or seedlings yet available, though there are organizations such as the Connecticut Agricultural Experiment Station and the American Chestnut Foundation working diligently on solutions to this. So, we selected seedlings for planting from surviving American chestnut trees with the ability to resist the blight enough to flower and produce nuts. This method will provide a new generation of trees that can be monitored for blight-resistance, as well as help preserve the genetics of the surviving native trees we have been left with. From those trees, the individuals that demonstrate the ability to grow strongly and produce nuts can be used to help breed even more tenacious generations in the future.

Adding to our mission to revive this keystone species at a time when it is needed most, we have begun expanding the diversity of our planting sites with other native trees. Wherever possible, we utilize spaces that have been left by other trees which are unfortunately declining due to invasive pests. After all, as the old adage goes, variety is the spice of life. The more we can provide diverse food sources for our wildlife, the more resilient their populations, as well as our ecosystems will be. The canopy space once occupied by an ash tree for example, which unfortunately may have lost its battle with the invasive emerald ash borer, can be replanted with another species that needs help reestablishing, and enjoys similar site conditions. While our primary focus so far has been to reintroduce the American chestnut tree, we want to make sure there are as many species as possible producing food for humans and wildlife at any given site.

Many gardeners may be aware of a concept called companion planting, in which different species of plants are intentionally grown in close proximity to each other to make use of specific benefits they may provide. Antinanco has incorporated plantings of other native species with the chestnuts, some with the intent of possibly aiding the chestnuts’ growth and health, and others in order to expand the diversity of food production on the sites.

For example, herbaceous perennial plants such as false indigo (Baptisia australis) and slender bushclover (Lespedeza virginica) were added near the trees to make use of their nitrogen-fixing abilities, as well as for their potential benefits to pollinators. Native trees such as honeylocust (Gleditsia triacanthos) and black locust (Robinia pseudoacacia) were planted for the same purposes, spaced a bit farther away, and can be cut back without being killed if they begin to compete with the chestnuts. Native fruit-producers, pawpaw (Asimina triloba) and persimmon (Diospyros virginiana), were planted at the sites as well, with pawpaws being sited where the soil stays more consistently moist.

Over the following two years since the first planting, Antinanco offered four more tree planting workshops in Pennsylvania and New Jersey. This has resulted in a total of two hundred fifteen native trees being planted by volunteers, children, and families. We pay these trees a visit each season to remove weed competition, take measurements, and compare the impacts of companion plants, tree genetics, sun/shade on site, and juglone presence — a toxic compound — on their health and growth.

Also of great importance to us is the ongoing monitoring and care of our American chestnut seedlings. We have noticed signs of chestnut blight in several of them, with the majority showing the ability to grow well despite this so far. We plan to test various methods of helping these trees as they grow, gathering as much useful data as possible along the way. Some of the trees from our first planting have already exceeded nine feet in height.

Antinanco’s American chestnut tree planting workshops have evolved into a well-anticipated annual program, offering a fun and educational channel for raising awareness of the American chestnut’s decline and its impact on local ecosystems. Our hands-on approach includes learning activities as well as group discussions with our resident forest experts, and step-by-step training and guidance through the planting process. Local volunteers learn to prepare a comfortable home for the trees by taking measures to protect them from wildlife, digging holes to proper depths, inoculating the roots with ectomycorrhizal fungi spores, taking careful notice of soil levels, and adding companion plants. Each newly planted seedling is named and labeled, which is helpful in tracking their progress and makes them easier to find when volunteers revisit their trees.

Our 2020 planting season saw much growth in attendance and overall interest in the project. We engaged over 150 local scouts, students, parents and other volunteers within two planting events. Amid the Covid-19 pandemic, our participants enthusiastically turned out with shovels in hand and contributed to the planting of forty American chestnut trees, forty-three pawpaws, ten American persimmons, nine hazelnuts, five honeylocusts, three black locusts and hundreds of companion plants.

Over the 2021 season, we expanded our existing chestnut plantings by 45 trees, and added 87 other native trees and shrubs to our planting sites. These will help to regenerate forest cover in areas where many ash trees were lost, and some will expand the food forest coverage as well since they are edible. Species planted include American persimmon, pawpaw, black chokeberry, larch, redbud, and silver maple. We also began the work of upgrading shelters on some of our older plantings, from plastic tree tubes to five-foot-tall wire cages, which will protect the trees while allowing more space for growth until maturity.

Another important aspect of the project began to quickly grow this past year as well: distribution of tree seedlings and seeds to our local public. Antinanco supplied nature enthusiasts with 192 native trees, including 50 chestnuts, and 250 chestnut seeds, to grow and expand biodiversity on their own land.

The following public parks have generously offered their land as a safe home for the seedlings. These parks and the amazing caretakers of these lands are protecting our plantings for the future.

In addition to growing community involvement, Antinanco is proud to have published and released our very first book American Chestnut Tree Conservation Field Course: Manual for Forest Ecology and Conservation of the North-East United States. The manual is designed for undergraduate college students and explores the topics of ecological principles to manage ecosystems, specifically focusing on the conservation of the American chestnut tree species. It includes fieldwork and lab components, and teaches how to recognize forest disturbances, determine forest age, identify dominant and understory species, the principles of basic tree identification, and how to measure biological diversity, tree growth and tree health. The manual is available for sale in digital and paperback versions at www.antinanco.org.

American Chestnut: The Life, Death, and Rebirth of a Perfect Tree by Susan Freinkel. University of California Press, 2009.

An Introduction to the American Chestnut Online Course by Stacy L. Clark. Available at https://www.srs.fs.usda.gov/products/courses/

Joseph Arnold Resch began caring for plants and gardening at the age of five and has worked in the green industry for over eleven years. He leads Antinanco’s effort to help the functionally extinct American Chestnut tree as Project Coordinator, as well as guides hikes and plant workshops. Lauren Anne Krumm’s lifelong appreciation for nature paved the way to her passion for preserving ecology and working with plants and herbal medicine. Lauren joined the Antinanco team as the Green Initiatives Outreach Coordinator in spring of 2020 to recruit volunteers for the American chestnut project.

This article originally appeared in the Journal of Medicinal Plant Conservation, 2020/21 and is reprinted with permission of United Plant Savers, www.unitedplantsavers.org.

Find local holistic Schools and Institutes in the Spirit of Change online directory.