Save a Tooth or Save a Life? The Root Canal Controversy

The controversy surrounding the safety of the root canal procedure has ensued for over a hundred years. Dr. Weston Price, the early 20th century holistic dental and nutritional pioneer, discovered long ago that there is no procedure that can completely sterilize a root-canaled tooth. Thus, the tooth becomes a harbor for anaerobic bacteria and their associated toxins. These toxins and bacteria then seep into the surrounding tissues and circulate throughout the body causing various health ailments. Today, a still practiced and promoted procedure by endodontists across the globe, the root canal can be one of the most detrimental procedures to overall health.

It is important to understand why and how root canals are performed. First, for whatever reason, the tooth has become sick due to decay (i.e., poor nutrition), traumatic bite, injury, dentistry, stress/emotional conflicts, etc. At this point, the dentist makes the call that the tooth can no longer be saved and will eventually die. A root canal or extraction is now in the future for this poor tooth.

A root canal typically entails a local anesthetic. After the patient is numb, the insides of the tooth are stripped with a file (see diagram). Once the inside chamber(s) are stripped of all tissues, sodium hypochlorite (common household bleach) is used to disinfect the tooth. Next, the inside of the tooth is dried and a filling material is packed. The filling material is typically gutta percha — the same material used inside of golf balls — along with a sealer. The whole procedure is accomplished in one or two visits and the tooth is now considered dead. Additionally, a crown or reinforced filling will be placed on the tooth to prevent any fracturing.

Next, let’s take a closer look at what is really going on. The main chamber has been cleaned out and packed with an inert material and supposedly disinfected. However, if you were to zoom in to the micrometer scale (average width of human hair = 100 microns), the tooth would no longer look solid. In actuality, the tooth is porous and full of what are called microtubules. These microtubules permeate throughout the entirety of the dentin.

Furthermore, the microtubules are supported by their own vascular system that connects to the main chamber. This whole network is why teeth are able to sense hot and cold sensations.

How is it possible to completely disinfect the tooth with all of these microtubules? In short, it’s not! Many biological/holistic dentists claim that a tooth can be completely disinfected using ozone. These dentists use this assertion to justify utilizing the root canal procedure within their practice. My personal experience with ozone shows otherwise. The ozone does not completely disinfect the tooth and you end up with the same situation in the end as with conventional techniques. It will temporarily halt these bacteria however the lack of blood supply to the tooth doesn’t allow the immune system to get in and clean up the dead bacteria.

Controversy surrounding the efficacy of root canals has been ongoing since Dr. Westin A. Price’s research in the early 1900s. Motivated by the death of his only child at a very young age from endocarditis after having a root canal, Dr. Price began his research to prevent other parents from having to live the same fate as he. Thus, he embarked upon a 25-year journey across the world where he studied the teeth, diets, and bones of native populations. He was determined to find a group of indigenous people who were free from dental decay. Furthermore, he conducted numerous studies exploring the results of root canals.

Over the course of his studies, Dr. Price came to learn that many degenerative diseases could originate from root-canaled teeth. The most common diseases associated with root canals are heart and circulatory diseases. The next most common are diseases of the joints, arthritis and rheumatism, followed by diseases of the brain and nervous system.

Based on his own research, Dr. Price recommended to an elderly woman that she have her root-canaled tooth removed. Up until this point, this woman was wheelchair bound and had suffered from debilitating arthritis for six years. After extraction, the woman completely recovered. Additionally, Dr. Price implanted the extracted tooth under the skin of a rabbit. Incredibly, the rabbit soon developed the same crippling arthritis as the woman and then died 10 days after the onset of the infection.

Fast forward 100 years and this procedure is still being performed despite all of the evidence against its safety. In fact, 25,000,000 root canal procedures are performed annually in the U.S. alone! Additionally, many new and different ailments — mainly autoimmune disorders — have been correlated with root-canaled teeth since Dr. Price’s time.

For nearly a decade, the late Dr. Hal Huggins carried on Dr. Price’s work by studying the bacteria found within root-canaled teeth. Through DNA analysis, he identified at least 90 different organisms that can have detrimental effects on the human body. “When we examine root canal teeth using DNA identification, we find microbes 100% of the time in hundreds of samples. Not just one microbe, but sometimes as many as 30 or 40 different primary anaerobic ones,” said the Colorado dentist, who was also known for outspoken advocacy against mercury fillings.

What many fail to realize is that a root-canaled tooth no longer has any fluid circulating through it, but the maze of microtubules still remains. Due to this stagnant environment, the odontoblasts (cells in the tooth responsible for the creation of dentin) will shrivel and die. The once aerobic (oxygen friendly) bacteria have now morphed into anaerobic (not oxygen friendly) bacteria. Worst of all, these anaerobic bacteria are no longer accessible to antibiotics. The lack of circulation throughout the tooth as well as no blood supply to the area is responsible for this unfriendly situation. 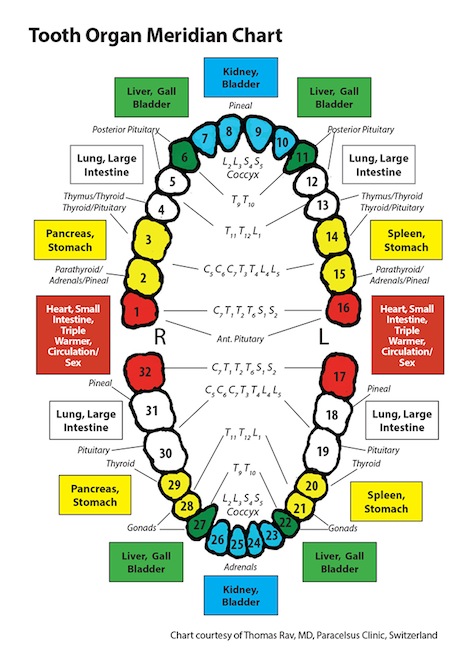 The ability for bacteria, in general, to move throughout the body has a long history of research and documentation in both the medical and dental communities. For example, the face is supplied by a single branch of the central nervous system, the 5th cranial nerve or trigeminal nerve. Bacteria from the mouth have been found to travel retrograde up the axon of the trigeminal nerve and elicit toxic infectious encephalopathy (infection of the brain).
Bacteria also have a negative effect on the energy meridian system of the teeth. The foundation of teeth energy meridian assignments is found in the teachings of acupuncture with its vast body of wisdom on the energy system permeating the entire body. An interruption of any point along the meridian system (ie, with a metal needle) will produce a noticeable effect elsewhere in the body, including the teeth. Each tooth is connected to a specific area of the body and disruption through bacteria or death (root canal), will also have an effect elsewhere in the body.

Throughout his career, Dr. Price published numerous articles on his research into the toxicity of root canals. Unfortunately, the American Dental Association (ADA) denies his claims and asserts that the root canal is a safe dental procedure. However, they have no published data or actual research to support this claim or refute the research of Dr. Price and others. In the end, the ADA deliberately buried Dr. Price’s work and there it remained for many years, unread and unappreciated. Fortunately, his work didn’t remain unnoticed forever.

Dr. George Meinig, an endodontist, was born in Chicago nearly 100 years ago. Early on in his adult life, Dr. Meinig was a captain in the U.S. Army during World War II. Afterwards, he decided that dentistry was the life for him and attended dental school shortly after being discharged. Following dental school, Dr. Meinig moved to Hollywood where he happily performed root canal therapy for many A-list actors. Eventually, he even became one of the founding members of the American Association of Endodontists.

Dr. Meinig’s benign notions of root canal therapy experienced an upheaval in the early 90s when he was introduced to Dr. Price’s life work. He spent 18 months intensively studying all of Dr. Price’s root canal writings and was powerfully moved by what he read. At that moment, he decided that he was going to expose the truth about root canals to all people. In June of 1993, Dr. Meinig published Root Canal Cover Up (Price-Pottenger Foundation), which continues to be the authoritative reference on this topic today. Thanks to this book, all of Dr. Price’s work was not done in vain.

To Pull Or Not To Pull

Deciding to lose a tooth or not is a question many people struggle with. This is an irreversible decision that should be made once the dentist and patient have exhausted all conservative efforts. It’s important to look at all your options before making a final decision.

First, determine what is causing the tooth to be in this position. Is it diet related? Is it bite related? Has the tooth been compromised by many dental fillings/crowns? Is the cause possibly emotional? Just because the tooth has an infection doesn’t mean that you have to lose it. Identify the cause and remove the cause if possible.

If the tooth is condemned, consider extraction over a root canal procedure. The evidence against the root canal is monumental and only grows with time. In the end, your health is in your hands and the choice is ultimately up to you.

Diane Meyer, DDS, has been extensively trained in the mouth and body connection. Her entire career of 38 years has been in the dental field where she utilizes medical practitioners and other healthcare providers along with her own knowledge to help her patients achieve their best overall health. Visit holisticdentistillinois.com.