Seed Saving And Sharing Key To A Grassroots Food Revolution 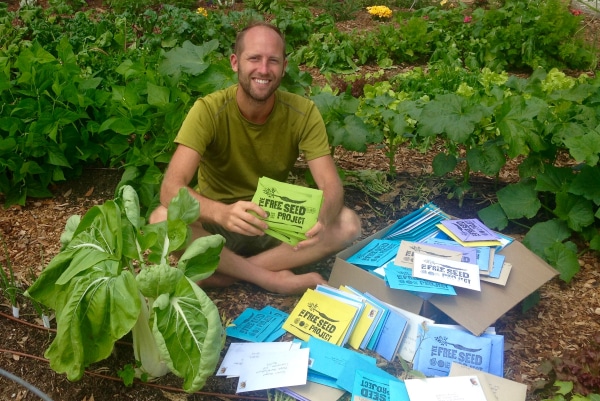 Do you want to build a more resilient, sustainable food system free from corporate ownership while protecting your local ecosystem? Then join the global movement to save and share seeds.

You don’t have to be a high-profile activist to be a seed guardian. Ordinary people are on the frontlines of the global revolution against corporate seed patents, the industrial seed business, and the way they decrease biodiversity.

Being a seed saver and sharer is an investment in future generations. All you have to do is cultivate, save, and share organic seeds adapted to where you live. You’ll help create change by contributing to a food system that’s more democratic, diverse, and sustainable.

The COVID-19 pandemic has been full of trauma, yet with it has come a reconnection with nature as people around the world, whether by choice or necessity, have started gardening.

This has increased the demand for seeds — and has inspired activism around the world.

While ordinary people lead the way, celebrity activists play their part too. This includes American sustainability advocate Rob Greenfield, whose extreme acts to raise awareness about consumption and waste include wearing all the waste he produced for a month and only eating food he grew or harvested himself for a year.

Since 2018, Greenfield has led a free seed distribution project, the Free Seed Project, in collaboration with the Live Like Ally Foundation (LLAF).

The program has since distributed over 20,000 free kits around the United States containing “some of the easiest-to-grow seeds out there,” including vegetables, herbs and bee-friendly flowers. According to the foundation, the goal is to “make it as easy as possible for new gardeners to get started and be successful.”

The program is also setting up seed libraries in community hubs around the country. Their goal is to improve access to healthy food, especially to the most vulnerable people.

India At The Forefront Of Seed Sharing

In India, the ecological advocacy organization Navdanya has promoted seed sharing since 1987, with a focus on conserving native, nutritious, and climate-resilient seeds. With a mission to conserve and reclaim the commons, the agency has established  150 seed banks and educational programs to support local, traditional, organic farming.

All of this hits close to home for Indian farmers, who are struggling with corporations that are using patents to own, make, sell and distribute seeds. This puts farmers in the position of “stealing” the intellectual property of these patented seeds by continuing their traditional methods of cultivating, selling, saving and sharing seeds.

In this economy, Navdanya is fighting the strict rules imposed by industrial agriculture and securing, through the seed banks, the future of many varieties of plants for local and traditional farmers across India.

The Seedy Sisters in the United Kingdom, in partnership with the Transition Town Movement, have mobilized seed savers by organizing gardening-training events, seed swaps, and skillshares.

In Brazil, members of the Movimento dos Trabalhadores Rurais Sem Terra (the Landless Workers Movement) created their own organic seed co-op, Bionatur, to “produce and commercialize agroecological seeds that can be cultivated, multiplied, conserved and improved by the farmers who acquire them, expressing their productive potential and their ability to adapt to the different regions of Brazil.” 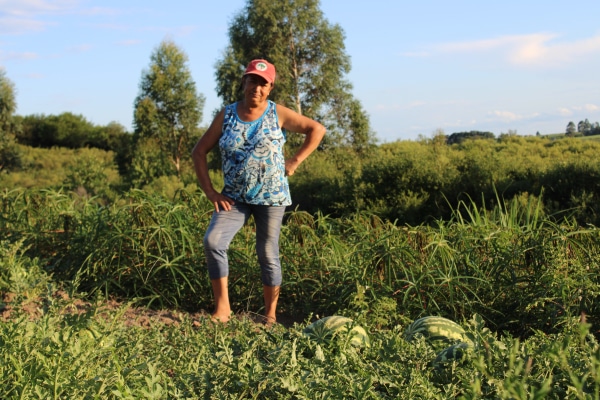 Farm worker in a watermelon field outside the municipality of Hulha Negra, Rio Grande do Sul, Brazil. Credit: Bionatur

Sara Cabreira, one of the Bionatur’s workers, says that seed saving pits “mainstream agribusiness against peasant agriculture.” She says that it’s literally a “dispute of territories,” with pesticides and conventional cultivation reducing the land available to small farmers to produce their own food and earn a living. “We started out with 12 families,” she says “and we currently support over 400 families to grow organically.”

Seed sharing has become a global phenomenon that can secure diverse and nutritious food for generations to come.

We can all learn how to do it, too. Planting a seed is a real act of hope, and maybe even a food revolution.

Mirella Ferraz coordinates the Network of Wellbeing’s community work in Totnes, U.K., where she’s helped set up the Share Shed – A Library.

This article is reprinted from Shareable under Creative Commons license.