Recent social movements such as the Women’s March, #MeToo, #TimesUp, #BalanceTonPorc (#OutYourPig), and #SayHerName draw attention to the broad spectrum gender-related violence that is pervasive in the United States and around the world.

Social science research takes a different form than protests, but paints a similar picture. A recent report by the Centers for Disease Control and Prevention estimates that 1 in 3 women and 1 in 6 men in the U.S. experience contact sexual violence in their lifetime. Contact sexual violence is defined as being made to have sexual intercourse with someone else, being sexually coerced, or having unwanted sexual contact.

Other types of sexism, including gender discrimination and sexual harassment, are even more frequent. A 2016 report from the Equal Employment Opportunity Commission estimates that between 25 percent to 85 percent of women in the U.S. experience workplace sexual harassment in their lifetimes.

We, a sociologist and a social epidemiologist, teamed up to find out the effects sexism has on people’s health.

Our study, recently published in the Journal of Health and Social Behavior, examined patterns of workplace discrimination and harassment in the U.S. and the consequences for physical and mental health. We sought, first, to determine how pervasive these types of mistreatment were for women, as well as for men.

Our second goal was to determine whether sexism, along with other forms of discrimination and harassment, contributed to health disparities between women and men.

Numerous studies show that women tend to report worse health compared to men, and we wanted to see if workplace discrimination and harassment might be contributing to this disparity.

We used statistical methods to analyze data from the U.S. General Social Survey, a national survey of English- and Spanish-speaking adults. The 2006, 2010 and 2014 surveys each contain a special section focusing on the quality of working life in the past year, including questions about discrimination in respondents’ current job, as well as respondents’ experiences with workplace sexual harassment and other forms of harassment.

A total of 3,724 out of 5,579 economically active respondents across the three survey years answered all of the questions we analyzed, and this group forms the basis of our research. We used weighting procedures (i.e., numerical adjustments applied to groups of respondents which were either under or overrepresented in the sample, relative to their actual size in the population) in all our analyses, so that the GSS data would be reflective of the broader U.S. population.

Of the women surveyed, 8.4 percent reported experiencing gender discrimination in their current job, and 4.1 percent indicated they had experienced sexual harassment at work within the past 12 months. Some men reported workplace gender discrimination and sexual harassment too, but the percentage was significantly lower (2 percent and 1.3 percent respectively).

In addition to gender discrimination and sexual harassment, we also examined other forms of mistreatment in the workplace. We found that nearly a quarter of women, or 23 percent, indicated that they had either experienced some form of discrimination, based on race, age, or gender, or a combination, in their current job or they had experienced some type of harassment in the past year. The rate of perceived workplace mistreatment among men was significantly lower at 16.5 percent. 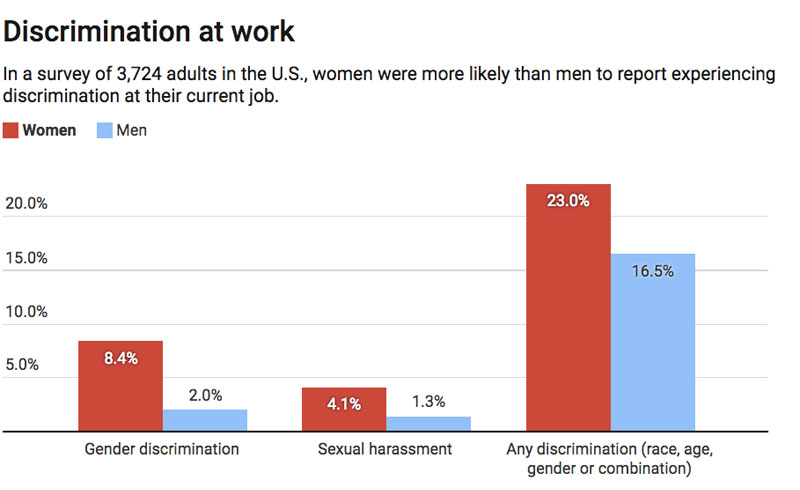 One of the main goals of our study was to examine the relationship between workplace sexual harassment, gender discrimination and health outcomes. We used a range of sophisticated statistical techniques to assess these relationships, including multivariate regression models which estimated the effect of various forms of mistreatment on health outcomes, while accounting for other potential causes for ill health (age, low socioeconomic background, etc.).

We found that, among women, perceptions of gender discrimination are significantly associated with worse self-reported mental health. Women who perceived sexual harassment also reported worse physical health. We did not find a significant association between gender discrimination and sexual harassment with health outcomes among men, but this may be a result of the small number of men reporting these forms of mistreatment.

Our results suggest that gender discrimination is responsible for around 9 to 10 percent of the gender gap in self-reported health. In other words, if we were to reduce the frequency of gender discrimination, we’d likely see a significant reduction in gender-based health inequality.

Overall, our results suggest that sexism takes a toll on women’s health and well-being. The high frequency with which women experience sexism – at work and elsewhere – underscores the importance of viewing it not only as a social justice issue, but also a public health issue.

Catherine E. Harnois is a professor in the department of sociology at Wake Forest University. Her research is rooted in multiracial feminist theories of intersectionality, and has appeared in the journals Gender & Society, Ethnic and Racial Studies, Social Psychology Quarterly, Social Science & Medicine, the Journal of Health and Social Behavior, and other scholarly outlets.

Dr. Bastos holds a Masters and a PhD in epidemiology. He is currently an Associate Professor at the Department of Public Health, Federal University of Santa Catarina, Brazil. He conducts research on racial inequalities in health, as well as on measuring self-reported discrimination in Brazilian adults. Dr. Bastos has published more than 90 peer-reviewed journal articles, 5 book chapters and 1 monograph on measuring discrimination and health in Brazil.

See also:
3 Strategies Today’s Activist Women Share With Their Foremothers
Me Too Creator Tarana Burke Reminds Us This Is About Black And Brown Survivors