Souls Without a Voice

All my life I’ve loved animals. My journey through life twisted and altered that love as it does with so many other people. My husband, Jim, also went through his life loving animals. He, too, had to adjust his love and life. Jim is a third generation dairy farmer. This is a brief introduction about our journey toward true compassion and veganism, rescuing a few precious farmed animals and teaching others about what happens to these souls without a voice. This is a multi-layered, complicated issue but I will attempt to keep this relatively simple.

When I was very young, I wanted to be first a physician, and then a veterinarian. Unfortunately I was growing up in a time when I was told women don’t pursue those careers. So after attending a liberal arts college I made a very naïve decision to work for a pharmaceutical company in Connecticut. Not really knowing exactly what I would be doing once hired, my goal was simply to help animals. Sadly, there were no animal rights groups to educate me or to take me by the shoulders and shake some sense into me back in those days! 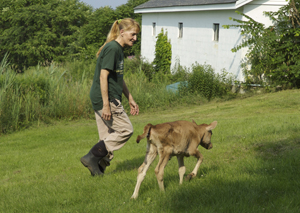 I became an autopsy room and histology technician. The animals still stare back at me through the veil of time. Faces of large, brown-eyed beagles looking into mine as I gently slid the needle into their veins. At least what I was doing caused no pain. I was ending their ordeal but I always felt sick about all of the lives I was betraying: dogs, cats, monkeys, rats, mice and pigs. I had to disconnect my heart from my intellect in order to function.

I occasionally asked why so many animals had to be killed and I was always told it was for the betterment of mankind. After four years I no longer felt mankind was worth all the suffering I was a part of.

I thought I was making a better choice when I got a job with the new, local aquarium. I was the lab technician, aquarist (cared for the many large fish tanks, cleaned exhibits and fed the fish), assisted the resident veterinarian with marine mammal care and autopsies, and swam and slept with many marine mammals to help them acclimate to their new captive environment.

But here I learned how mammals that were used to swimming hundreds of miles in a day or two were suddenly limited to a huge, chlorinated swimming pool. They were trained to do unnatural behaviors every hour, every day. When they didn’t want to do those behaviors, they were punished by the withholding of rewards and attention.

If a harsher punishment was needed, the dolphin would be placed in solitary. Eventually some of these highly intelligent animals would make a final high jump out of the water aiming for the cement stage and land on it. The next day we would come into work to find a precious dolphin dead from massive hemorrhage. After witnessing how disposable these sentient beings were and realizing how useless I was to attempt any kind of correction, I quit.

All those years while I was learning about and witnessing the various forms of animal abuse, my future husband was working hard on the family farm milking and caring for cows, delivering calves, harvesting thousands of bales of hay every year and getting it into the barn, delivering milk and, somehow, sleeping once in a while. 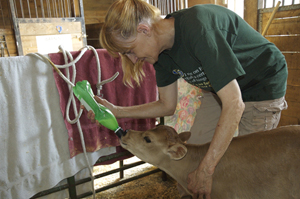 Part of bovine care on a dairy farm is the practice of keeping track of each cow’s heat cycle. Jim would watch each of his cows for the signs they were coming into heat. Most dairy farmers have a catalog of bulls whose semen has been “harvested” and frozen for future sale. Jim would select an appropriate bull and call one of the technicians whose role was to bring that selected semen and place it into the cow. A volunteer who now helps us on the sanctuary put it best when describing this practice of impregnating a cow: Rape. The poor cow has no say in the matter and nothing about this ordeal is normal.

In order for a cow to make milk, she must have a calf every year. When that calf is born, it is removed as quickly as possible and if it’s lucky, will have some of its mother’s colostrum so it will have a healthy immune system. If not, the calf is most likely going straight to slaughter for pet food. The heifers (baby female calves) are kept if they have a good possibility of becoming good milkers. The others — male or female — might go for a veal operation.

Jim grew up in this environment and certainly felt it was the normal thing to do. But, like so many of us, he also loved animals. If we try using today’s new criteria for humane farming, Jim was a humane farmer. Problem is, the process is both abnormal and inhumane. Removing a baby from its mother at birth is inhumane for both. Unless a farmer steels his heart, which they all must, the crying of the mother and calf for one another simply breaks your heart.

The normal life span of a cow can be 20 to 25 years, but when we constantly breed, milk and genetically engineer them, their life span normally only reaches between 8 and 10 years. They are most often shipped for slaughter before they are too worn out and can’t stand, so a higher price can be had.

After a few years of breeding and milking the cows, delivering the milk, growing, harvesting and putting up the hay, Jim had to start letting some things go. Jim and I met around that time when he was just getting rid of his milkers. I could see it saddened him; he was attached. But as I had heard many times before and later from Jim, that’s the way it has to be if we want to have milk to drink and cheese to eat. 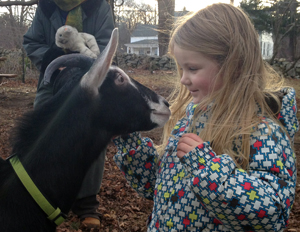 But, wait…out of all of the mammals on Earth that lactate and breast feed their young, how many of them continue to drink milk their whole life? Mankind breeds cows, horses, cats, dogs and on and on and those animals are weaned to finally end up eating the food appropriate for that breed. Why does mankind have this need to drink milk, and not just milk, but milk from another species, his whole life? Well, that’s a whole other discussion.

I was working at Digital and had a few dairy goats at home when I met Jim. As we grew to love one another we discussed the issues of farming animals and how so many have to die for mankind to have all of their animal products: milk, cheese, gelatin (for jello and similar products), rennet for making cheese (taken from the stomach of a dead calf), leather and more, all for the benefit of mankind.

Then we talked about the goats I was milking. I began with only a few does but as the herd grew for milk production and the goat cheese I made, so did the baby goat numbers. I wanted them to go to loving homes, like a dog or a cat would, but Jim reminded me that if I wanted to make milk and cheese this was a part of the business.

At the same time both he and I were witnessing the birth of these precious baby goats and the desire of the mothers to love their babies. When Jim milked cows he didn’t have to have much contact with the calves. They were born, he’d call the livestock dealer who would come and pick them up, and Jim would get a check in the mail. 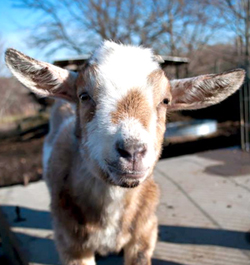 With our baby goats I would very often help deliver the babies because there were sometimes dystocias (any abnormal presentation of the baby). I would put the baby in front of the mother while I checked for another baby — they often have twins…or more — and I’d let the baby suckle to get its colostrum, but ultimately had to remove the baby(s) so we could have the milk to sell.

Jim and I would bottle feed the babies, give them their shots, nurse them back to health if they got sick and then customers would come buy them “on the hoof” for their Easter meals or picnics. I would look into our baby goats’ eyes and see that I had abandoned them. They looked at me and cried out, “maamaa.” They were so horribly frightened and Jim and I did nothing. It was tearing us both up emotionally.

One day as we stood by the goat barn gate listening to yet another baby goat being driven away, hog-tied, in the trunk of a car, crying and crying. Jim and I looked at one another with tears in our eyes and said we could no longer do this. It wasn’t right. But, what were we going to do? This was how we made money to pay the bills.

We had help from PETA finding a sanctuary that could take half of our goats to ease the financial burden. Then we had help from Casey and Jason in Pennsylvania who, at that time, had a sanctuary called OhhMahNee. Even though I knew the goats were going where they would have a life and be loved, I still cried and felt as if I were losing them. 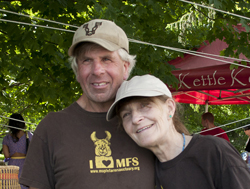 Finally, we decided to become Maple Farm Sanctuary, a lifelong home for abused, abandoned and unwanted farm animals in Mendon, MA, promoting veganism and respect for all life through education. A third generation dairy farm was now going to nurture, not torture, animals.

Cheri VanderSluis, along with her husband Jim, is the founder and caretaker of Maple Farm Sanctuary and its animals in Mendon, MA. Please visit www.maplefarmsanctuary.org to learn about farm tours, events, volunteering and the animals. MFS is also featured in an award-winning documentary “Peaceable Kingdom: The Journey Home”, a riveting story of awakening and healing. To learn more visit www.peaceablekingdomfilm.org/