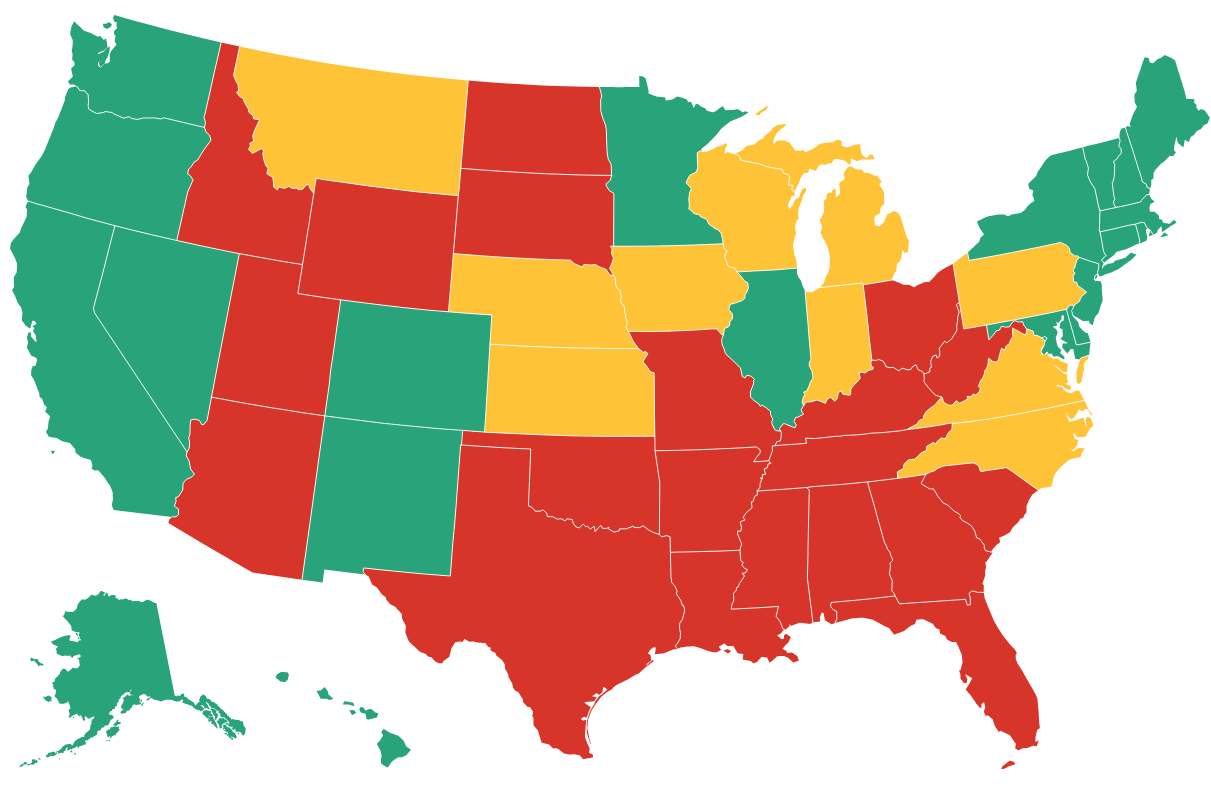 According to a New York Times analysis of state laws, now that the Supreme Court has overturned Roe v. Wade, 20 states are expected to prohibit or restrict abortions, 20 and the District of Columbia will continue to protect or expand abortion access, and 10 have uncertain or potentially changing legal situations. Map: The Conversation, CC-BY-ND Source: New York Times

The Supreme Court’s decision to overturn the constitutional right to abortion had been indicated via a leaked draft opinion some weeks ago, but that doesn’t diminish the impact it will have.

The ruling handed down by the Supreme Court on June 24, 2022, upends 50 years of reproductive rights in the U.S. but comes after a prolonged period in which those rights have been eroded at the state level.

It will have far-reaching implications for the social and political future of the states as well as for millions of American women. Here are five articles to help explain the importance of this decision and what to expect next.

1. The Long History Of Debating Abortion In The US

Despite the magnitude of this ruling, it is unlikely to end the debate on abortion. Indeed, as Treva B. Lindsey at The Ohio State University writes, the battle over the right to abortion predates 1973’s Roe v. Wade ruling by more than a century.

She writes that in the early 1800s, “pre-quickening abortions” – those performed before a pregnant person feels fetal movement – were fairly common, and even advertised. But in the mid- to late 19th century, states began to pass laws banning abortion. Those bans were motivated, at first, by concerns over the high risk of injury or death to women who got an abortion.

But there was also a racist reason.

“A spike in fears about new immigrants and newly emancipated Black people reproducing at higher rates than the white population also prompted more opposition to legal abortion,” Lindsey writes. By the beginning of the 20th century, abortion was illegal in every state. But the women’s liberation movement and sexual revolution of the 1960s sparked renewed discussion about reproductive rights. Some states legalized abortion under specific circumstances. Then in 1973 came the Roe ruling.

That long history of the states deciding whether to ban or legalize abortion is set to resume again after 50 years of women in the U.S. having a constitutional right to abortion guaranteed under Roe. Thirteen states, including Arkansas, Missouri and Oklahoma, have so-called “trigger laws” that aim to restrict abortion as soon as Roe was overturned. But in others, the future of abortion rights is less clear and could take some time to work out.

Katherine Drabiak at the University of South Florida surveyed state abortion laws for The Conversation. With Roe now overturned, it appears that 20 states will ban or restrict abortions, while 20 states and the District of Columbia will protect – or even expand – a person’s ability to get a safe abortion. This leaves 10 states in which the picture is less clear. As Drabiak writes, rather than the Supreme Court ruling being the end of the matter, the ruling could be just the “starting point for states to navigate a wide range of new abortion laws.”

3. Barriers To Abortion In Liberal States, Too

The patchwork of laws across the states will accelerate a process that has been evident in recent years: Women traveling out of conservative states to get an abortion. Indeed, as University of Colorado Denver’s Amanda Jean Stevenson and Kate Coleman-Minahan write, such states as California, Washington, Illinois and New York are “likely to experience an influx of people seeking an abortion if they no longer can get one in their home state.”

But these states may not become an unconditional refuge for people seeking abortions. A range of obstacles may prevent women living in states with abortion bans getting the procedure done elsewhere. Going out of state for an abortion is expensive – you need money for travel and lodging. Increased demand for abortions in states where it’s legal may lead to longer wait times for appointments. Such delays could be crucial, Stevenson and Coleman-Minahan write, when traveling to 18 of the 25 states expected to keep abortion legal. These states currently prohibit abortions later in pregnancy – typically after the first trimester.

Meanwhile, some states that are aren’t expected to ban abortion have other barriers, such as requiring those under the age of 18 to obtain consent from a parent.

4. Warnings From Ireland Over What’s To Come

With a large proportion of Americans living in states that will ban abortion – and laws in more liberal states that still make getting an abortion difficult – the likelihood is that many women will have no choice but to remain pregnant.

Gretchen Ely at the University of Tennessee suggests this will put the country on a similar path to Ireland between 1983 and 2018. She writes that the religiously motivated anti-abortion law in place in Ireland during that time is analogous to those on the books in several states in the U.S. The Irish law led to a prolonged period of suffering for many Irish women, documented in a series of court cases that helped turn the tide of opinion toward legalization.

These included the tragic case of Savita Halappanavar, a 31-year-old woman forced to miscarry an unviable fetus rather than terminate the pregnancy with medical assistance, which was classified technically as an illegal abortion. Having doctors terminate the pregnancy would have reduced the risk to her life. Instead, Halappanavar died after suffering organ failure and enduring four days in intensive care.

“In contrast to the United States, Ireland is moving away from political control over private life,” Ely writes. With Roe reversed, she says, “pregnant people could face decades of forced pregnancy, suffering and even death – as was the case in Ireland prior to 2018.”

5. A Decision Affecting Millions, Made By A Few People

Whereas in Ireland in 1983 abortion was banned by means of a referendum – albeit one in which barely half the nation voted – in the U.S. the decision to overturn the constitutional right to get an abortion was made by a handful of Supreme Court justices.

Nominated by Republican presidents, the four men and one woman who joined the conservative majority opinion overturning Roe all won confirmation to the court “with the support of a majority of senators, but senators who did not represent a majority of voters,” writes Kevin J. McMahon of Trinity College. “They are numerical minority justices.”

This practice has deep consequences. “Supreme Court justices have lifetime appointments and typically stay on the bench for many years, even decades. Their imprint on the law can be enduring and their legitimacy, conferred in part by the confirmation process, helps ensure their place in our democracy,” McMahon writes.

The legitimacy of the highest court in the land is at stake, McMahon says, as a result of having justices make decisions without the weight of a democratic mandate.

“A five-justice conservative majority that discards Roe after nearly 50 years on the books will likely further the belief that the court reaches its rulings based mainly on politics rather than law, especially given the central role opponents of the decision have played in mobilizing voters to support Republican candidates like Donald Trump,” concludes McMahon.

Matt Williams is an editor with more than two decades’ journalistic experience. A former breaking news reporter for the U.K.’s Press Association, he moved to New York in 2009 as the agency’s North America Correspondent. After a stint as weekend editor for the Guardian, Matt joined Al Jazeera America as senior editor, later taking on a similar role at ABC News.