The Biggest Source of Plastic Trash You've Never Heard of

“Seed trays, drip tape, mulch film, water pipes, hoop house covers, twine, hose, fertilizer bags, totes, tool handles and everything we use to keep ourselves dry.” On a rainy March afternoon, Kara Gilbert, co-owner of Vibrant Valley Farm, rattles off how plastics are used on the farm as she stamps mud off her boots.

On a visit to the four-acre farm on lush Sauvie Island at the confluence of the Willamette and Columbia Rivers near Portland, Ore., Gilbert gives me a tour de farm plastics. The fields are just being readied for the season, but black plastic is already laid out under a hoop house. PVC water pipes are being set into place and drip irrigation tape is ready to be deployed, as are plastic sacks of fertilizer. Out in the greening field, little orange-pink plastic plant tags on ankle-high stakes flap in the wet breeze to mark rows of just-sprouted peas.

By farming standards, this is a tiny operation. It sells organic produce to 15 or so local restaurants and through community-supported-agriculture shares, and grows flowers it sells wholesale. But even this small farm, Gilbert says, spends between $4,000 and $6,000 on plastic every year. Maybe more. It’s an environmental trade-off, she explains: Using plastic means saving water.

“In our very fickle climate, if we want to have a local food movement and want to compete with California and Mexico, it’s almost imperative that we have the black plastic,” Gilbert says. “Plastic film or road cloth is a weed suppressant,” explains farm co-owner Elaine Walker. “Black plastic can retain heat and moisture so you don’t need to water as much and you can grow things in the off season.” 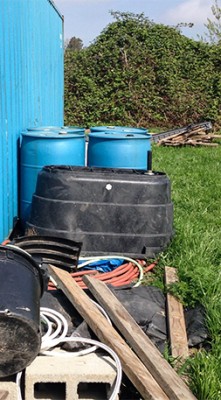 Whether it’s this small organic farm coaxing an impressive yield out of a few acres in Oregon or a large conventional operation somewhere else in the world, plastic is a huge part of modern agriculture — a multi-billion-dollar worldwide industry, according to Penn State Extension. Billions of pounds are used around the world each year, with much of the plastic designed for one season’s use.

There’s a growing recognition by farmers and others in the agricultural community of the need for environmentally responsible disposal solutions for these materials. The question, though, is how to do that with materials that are designed to not break down in rain, sun and heat, and that can — if burned or left to degrade — pose environmental health hazards.

Really good numbers on the amount of plastic used in agriculture are hard to come by, but experts in the field, including Gene Jones of the Southern Waste Information eXchange, estimate that U.S. agriculture alone uses about a billion pounds annually. This includes films — used for mulch, greenhouse covers, and to wrap bales, tubing and pipes. It also includes nursery containers, pesticide containers, silage bags, storage covers, twine and more.

Specialized products figure into the mix as well. Farmers in cooler regions use plastic to enhance warmth, for example, while in the southern U.S. farmers use plastic to cool soil and plants. “There’s some reflective, some colored plastic, but all deal with the sun at different times of year,” says Jeremy Nipper, sales representative for Kennco Manufacturing, a Florida-based farm machinery company whose products include equipment to deploy agricultural plastics and collect and dispose of used field plastics. Plastic films laid down on planting rows also helps keep fertilizer from running off fields when it rains. And, as Walker explains, plastic mulch films helps suppress weeds.

Worldwide, the agricultural plastic film market alone was estimated to be worth $5.87 billion in 2012. That year’s global demand, according to one market analyst, was more than 9.7 million pounds, with about 40 percent of this being used in mulching. China is estimated to be the world’s largest consumer of agricultural plastic films, using about 60 percent of all such plastic.

What to do with all this plastic when it’s no longer useful is the ongoing challenge.

“There [is] lots of interest in reducing the impacts,” says Scott Coleman, vice president of strategic development for Delta Plastics, an Arkansas-based company that specializes in agricultural irrigation tubing.

Historically, discarded agricultural waste has been taken to landfills or been burned or buried, often on farm property. But most states have now enacted rules against outdoor plastics burning, and this has spurred interest in other options.

One is trying to use less plastic in the first place — often by extending use through more than one growing season. For example, Nipper explains that some growers can get two seasons out of one set of plastic mulch films by reusing with a different crop.

Currently only about 10 percent of farm plastics are recycled.

Walker notes that instead of thin film that’s hard to reuse, Vibrant Valley Farms has been using sturdier road cloth that will last for several seasons for weed suppression and to retain moisture and heat. Similarly, while Florida watermelon growers use thin single-use plastics, strawberry growers get two seasons out of plastic not quite twice as thick.

By far the biggest opportunity to reduce farm plastic waste, however, is through recycling. Currently only about 10 percent of farm plastics are recycled. Increasing that number will depend on making drop-off more convenient and expanding options for giving plastic a second life.

In New York, where a statewide ban on backyard or farm burning of plastics was passed in 2009, the Cornell program worked with the state’s Department of Environmental Conservation to pioneer agricultural plastics recycling and do educational outreach about recycling options through extension programs and local soil and water conservation districts. 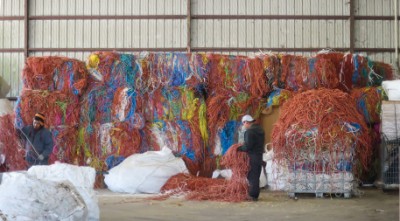 “The solid waste [management] people thought we were crazy to get involved because there were no markets for this plastic,” says Leonard. “It was an exciting breakthrough when we found someone who would take this,” he says. One of the first companies Cornell’s recycling program found that could use this plastic was a manufacturer of plastic sidewalk and paving materials.

Another big issue in recycling agricultural plastics is dirt and debris. “The problem with high dirt content is that it’s really hard on machinery,” says Coleman. There can also be concerns about transporting contaminants such as pathogens with that debris.

Agri-Plas, an agricultural plastics recycler in Brooks, Ore., handles most kinds of plastics, from bale wrapping and fertilizer bags to hard plastics and drip tape. Enormous piles of sorted plastics stand at the Agri-Plas facility, located in the midst of Willamette Valley farm country: colorful cubes of twine, clusters of black drip tape and seed trays, white mounds of plastic wrap and bags, and, in a special area, blue and white pesticide buckets that have been triple rinsed before collection.

Agri-Plas is also one of the nine or so facilities around the country that are working with Ag-Container Recycling Council a take-back and recycling program for used pesticide containers started by 20 major agricultural chemical manufacturers in 1992. The member companies help support the program financially and designated contractors process the collected material into plastic products the program has approved as safe for “post-pesticide” use. These are typically things people won’t touch on a regular basis, like outdoor drain tile, says Mary Sue Gilliland, vice president of operations and business development. This precaution is taken even though according to ACRC tests, virtually no pesticide residues remain after proper cleaning and processing. The program is considered successful with a recycling rate of about 33 percent, says ACRC executive director Ron Perkins.

As complicated as pesticide container recycling sounds, plastic twine seems to pose even greater challenges. The material, Gilliland says, “is very abrasive and beats the heck out of machinery.” In one outdoor bay at Agri-Plas, workers are busy removing hay from plastic twine, by hand. “There’s no other way to do this,” says Gilliland.

Agri-Plas does some processing on site, shredding and grinding. But that’s the comparatively easy part of plastics recycling, says Gilliland and others in this industry. The real challenge is finding a company that can use the recycled plastic.

“Twenty years ago, as we were producing [agricultural irrigation] pipe and saw the waste created from it, our founder saw there was a need to figure out a solution,” says Coleman. “Finally, we came up with a proprietary method for processing dirty pipe.” Delta Plastics uses much of this material itself, but it also sells it in pellet form to other manufacturers who mainly use it to make new plastic sheets and film.

Another solution some companies have been experimenting with is turning waste agricultural plastic into fuel oil.

Meanwhile, other companies are making products that include plastic pavers, outdoor building materials and other items that are less technically finicky than plastic sheeting.

Finding a company that can process any of this plastic domestically also remains a challenge, says Gilliland. She estimates that about 40 percent or more of the agricultural plastic collected for recycling goes to export, typically to China or elsewhere in Asia.

Another solution some companies — including one called Agilyx, which lists venture capital firms and Richard Branson among its investors — have been experimenting with is turning waste agricultural plastic into fuel oil. But this has proved problematic for a number of reasons, among them how federal and local governments regulate such processes, says Gilliland. Still she thinks this solution, if done properly, might pencil out as an environmentally preferable option given the logistical difficulties of repurposing the vast quantities of soiled, used agricultural plastics.

Out on Sauvie Island, a cloudburst has passed and a bald eagle and several honking geese have flown by. Kara Gilbert kneels down in the muddy spring ground next to a small orange plastic flag and picks a pea sprout. A few yards away, plastic sacks of soil amendments and last season’s black plastic road cloth is waiting to be laid out for 2015 planting — testimony to the complexity of inputs that need to be managed today to produce even the simplest of foods. “You have to taste this,” she says handing over the tiny leafy greens, “they’re awesome.”

Elizabeth Grossman is an independent journalist and writer specializing in environmental and science issues. She is the author of Chasing Molecules, High Tech Trash, Watershed and other books. Her work has also appeared in a variety of publications, including Ensia, Scientific American, Yale e360, the Washington Post, TheAtlantic.com, Salon, The Nation, and Mother Jones. She tweets from @lizzieg1.