The Legendary Origins of Tea

Today, you are either a coffee drinker or a tea drinker. There could be no more evidence of this than finding a Starbucks at the Great Wall in China, in the back lanes of Beihai Park and at the Forbidden City.

This, amid a country of tea drinkers! As we traveled China this year for our cultural tour, we were all astounded by these new landmarks. To be sure, there were not many Chinese people in these Starbucks and here is a reason for that.

The ritual of tea drinking is, very simply, a labor of love and provides great wealth to the health of the body. It is drunk as a beverage, but from the Buddhist point of view there is more to it than the physical refreshment we receive. As an elixir of sobriety and wakeful tranquility, tea remains a means of spiritual refreshment. The ritual of preparing and partaking of it is an occasion for spiritual awakening. Coffee on the other hand, offers no such benefit.

Folklore indicates that various Buddhists cultivated the tea plant as early as 500 BCE. It is said that Bodhidharma, the first patriarch of Zen, sailed from India to China, and sat meditating for nine years in front of the Shaolin Temple. During this marathon meditation, he dozed off. Without hesitation he sliced off his eyelids to make sure they would never again close and interrupt his wakefulness. Where they fell, the compassionate deity Quan Yin caused tea plants to grow out of his tears to serve Bodhidharma and all who came after him as an aid on the path to enlightenment.

Historically the wild tea plant was found in Yunnan province as early as 2700 BCE by the emperor Shen Nung. (Coffee was believed to be cultivated in Arabia in 674 AD). Tea was adapted by the Chinese people to suit the needs of their religion. Virtually all the earliest teas mentioned in history and lore are named for mountains, which were also sites of large monasteries.

The role Buddhism has played in the history of tea in Asia exactly parallels the role of Catholicism in the history of wine in Europe. Their respective beverages assumed ritual significance and the faithful of both traditions became devoted consumers. Catholic monasteries became centers of grape growing and wine-making the same way Buddhist monks took up tea-growing and evolved increasingly sophisticated methods of tea manufacture. Innovations like champagne, invented by the monk Dom Perignon, had their parallels in China where anonymous Buddhist monks gradually developed the various types of white, green and oolong tea.

All tea comes from the same plant, camellia sinensis. It is the processing of the leaf that makes the difference. Here are the differences in tastes. 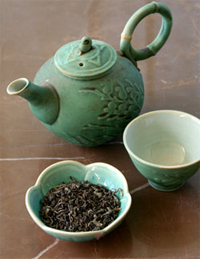 Black tea is fermented and exposed to oxygen. It is this fermentation that is responsible for its strong taste.

Oolong tea is partially fermented and the taste is between green and black tea.

Green tea is unfermented, though leaves are steamed immediately after plucking to halt the enzymes that cause fermentation. The taste can be floral or grassy.

Pu’erh tea improves with age. It remains a secret as to how this tea is processed. Pu’erh’s taste is earthy and greatly prized.

White tea is the least processed and the rarest of all teas. It is the unopened bud and first two leaves of the plant, harvested only a few days a year in April. White tea has been proven to be even more powerful in inactivating bacterial viruses than green tea. White tea extract has been shown to actually destroy, in vitro, the organisms that cause disease. Its properties are anti-fungal, anti-bacterial and anti-viral. It has been shown to reverse skin cancer.

Scented tea (jasmine) are teas that have added layers of flowers to scent the tea which are then removed.

Flavored tea is made by adding essential oils or natural flavors to the leaf. Beware of artificial or chemical ingredients when buying these teas.

There are many people who simply do not like the taste of tea. In Chinese medicine we look for ways to incorporate tea into a person’s diet without it being a chore. One way is to brew tea (any type) and place it in a large pitcher in your refrigerator. When there is a need for water in your cooking, whether it is boiling pasta, making a stew, making lemonade or making a marinade, take advantage of all the positive effects of tea by using it in place of the water.

This is another delicious way to get tea benefits everyday and the warming of the ginger and the dispersing quality of the cardamom is great for the cold months. You may omit these ingredients if you wish during the warmer months of the year.

Make a great chai in your crock-pot!

Directions
Combine the water, tea, sugar, cloves, cardamom, cinnamon, and ginger into your crock-pot. Cover it and cook on high for 2 hours. Strain the mixture and discard the solids. You can cover and store this chai in the fridge for 2-3 days. Stir in your milk just before serving. (Can be served warm or cold) Garnish with a cinnamon stick, Enjoy!

Laura Mignosa is a certified Chinese Herbologist and the director of the Connecticut Institute for Herbal Studies since 1992. Information on her Chinese Herbology classes can be accessed at http://www.ctherbschool.com or by calling her at her office in Wethersfield, CT at (203) 666-5064.