The Unsung Caribbean Roots Of The Vegan Food Movement 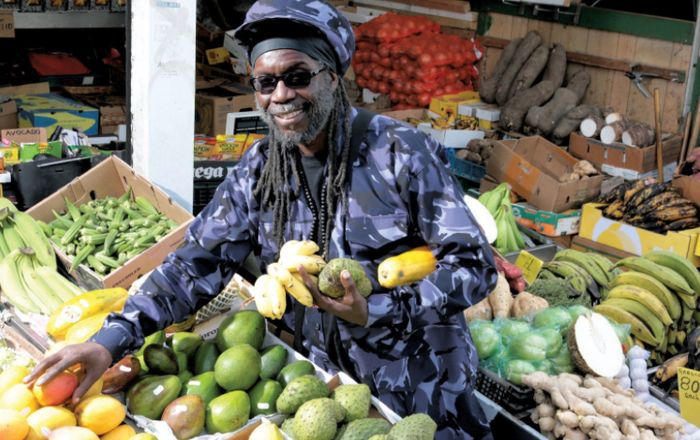 Vegan food is booming in coastal cities, but the same can’t be said for other parts of the country. And that’s a problem. While eating a plant-based diet is often presented as a White, millennial fad that accompanies gentrification, the ital foodways practiced by Caribbean Rastafarians remind us that Black people have a long and rich tradition of plant-based eating. And access to fresh and culturally relevant food across the U.S. hinges on a broader understanding of non-White vegan food traditions.

Most Western diners know Jamaican food for its bold flavors like “jerk” and a heavy emphasis on meat: namely, goat, beef, and chicken. However, Rastafarians (“Rastas” for short) have been promoting vegan lifestyles for nearly a century. Beyond stereotypes of lively men in dreadlocks smoking marijuana, Rastafarianism is a spiritual practice rich with political ideology and a reverence for the Earth. And their veganism is part of a broader belief in Black sovereignty, health, and ecological harmony.

Rastafarians have been promoting vegan lifestyles for nearly a century.

Last year, 9.7 million Americans were reported to follow a plant-based diet. And Black Americans are three times more likely to be vegan than non-Black Americans. As the market for vegan food swells, a deeper understanding of Black plant-based food histories  becomes even more crucial.

There are signs of progress: Black vegan chefs continue to celebrate plant-based cooking from the African diaspora, and vegan influencers of color are speaking out about cultural appropriation. As more consumers transition to plant-based diets to decarbonize their plates, awareness of diverse vegan foodways can help to decolonize the movement and be true to its diverse, historical roots.

The 1930s brought widespread disenfranchisement of Jamaica’s peasant class, and Rastafarianism arose in opposition to British colonial control. Heavily influenced by the Black nationalist beliefs of Marcus Garvey, Rastafarians then and now reject the hegemonic power structures that contribute to Black oppression.

Garvey, a respected activist throughout the Caribbean, prophesied that a king crowned in the East would bring redemption for the Black race. When Ethiopian Emperor Haile Selassie rose to power in 1930, fledgling Rastas believed him to be the Black messiah. The fulfillment of this prophecy became the foundation for the Rastafari movement, even taking its name from Emperor Selassie’s title before he was crowned, “Ras Tafari.”

“Ital comes from the [dread talk] word for ‘vital,’ ” says Qulen Wright, a Rasta chef and co-founder of Caribbean Style Vegan, a restaurant in New Haven, Connecticut. “It’s based on livity: an energy granted by God (Jah), flowing through all people and living things.” Those who eat ital avoid processed foods and meat (considered “dead” food) because it lacks the livity so fundamental to Rasta spirituality. Rasta communities created their own dialect of English, “dread talk,” as another means to resist the language of their colonizers.

This is why Rastas typically wear their hair in dreadlocks: to celebrate the strength of Black hair, and because cutting one’s hair—thus, tampering with the body’s natural state—impedes livity. In 1981, Bob Marley, perhaps the most famous Rastafarian, died after refusing a life-saving toe amputation because it violated Rastarian beliefs around livity. Not all practicing Rastas are as strict as Marley. Different groups, known as mansions, have their own tenets, but this notion of livity unites Rastas around the world.

As Jamaican chef Tamika Francis, founder of Food & Folklore, a Boston-based culinary startup, explains, “[Rastafarians] were always concerned with what we now call ‘slow food,’ and are mindful about food production without sacrificing flavor.” Stews and soups are central to ital cuisine, and traditionally slow-cooked in clay pots with yams, potatoes, gungo (pigeon) peas, kidney beans, pumpkin, callaloo (a leafy green native to the Caribbean), aromatics (because strict Rastas forgo salt), and central to it all: fresh coconut milk.

One-pot meals allow Rasta communities to feed many people at low cost, and harken back to cooking practices common during slavery. “Enslaved people had to throw something on the fire and go back to work, so high-nutrient ingredients were essential,” Francis continues. “Ital food might look really simple, but it’s so intentional.”

Rastas have a complex relationship with sovereignty, largely because of the tumult surrounding the end of slavery in the Caribbean in 1834 and subsequent years of British rule. As Howell and other Rasta leaders grew a following among Jamaica’s peasant class in the 1930s, cities saw a gradual exile of Rastas to rural parishes.

From the beginning, colonial powers viewed Rastafarian anti-capitalist beliefs as a threat and criminalized those who openly identified as such. To escape persecution, Rastas fled to the mountains, where they could more freely access land and practice self-governance. The cultivation of ganja afforded them economic freedom and supported their ritualized use of the herb for spiritual enlightenment, which is why Rastafarianism today is so often associated with marijuana.

The kitchen gardens and multi-acre plots now common among Rasta communities are remnants of provision grounds—hilly land unsuitable for growing cash crops that plantation owners set aside for use by the people they enslaved. Ital eating calls for a return to this form of self-sufficiency, and a diet rich in vegetables and foraged foods typical for newly freed Afro-Caribbeans.

Decolonizing veganism—overturning its whitewashed history—is a critical act of resistance.

The Rastafarian movement is remarkable for its anticipation of modern concerns around food justice. Independent Rasta communities often boycott commercial grocery stores and actively combat food insecurity faced by their poorest residents. “A Rasta food stand might sell a meal to locals for $7, but charge twice the price to tourists,” says Akeia de Barros Gomes, Ph.D., a cultural anthropologist-turned-curator at Mystic Seaport, who worked with Rasta communities in the Virgin Islands. “The poorest locals ate for free because their meals were subsidized by foreign capital from tourists.”

Lest we confuse Rastas with idyllic hippielike figures forsaking the modern world, the Rastafari movement has clear political aims. While the movement’s early leaders advocated for repatriation to Ethiopia, its contemporary focus is liberation for Afro-Caribbeans and all Black people: a means to resist the poor-quality food imported from Western nations and to reconnect the formerly enslaved with a lineage of eating in sync with the Earth.

Paige Curtis is a third culture kid, writing at the intersection of environmentalism, Blackness, and pop culture. She covers climate tech, Black environmentalism, and uplifts the environmental ethics embedded in Caribbean livelihoods. Paige worked at mission-driven organizations and is currently in a communications role at the Boston Ujima Project. She can be reached at paigecurtis.me