Tiny Houses Are Cute, But Can You Actually Cook A Meal In One?

As an avid cook I wondered what orchestrating a sizable meal would be like in the two-burner kitchen of a 250-square-foot home. So I gave it a try with my favorite recipe. 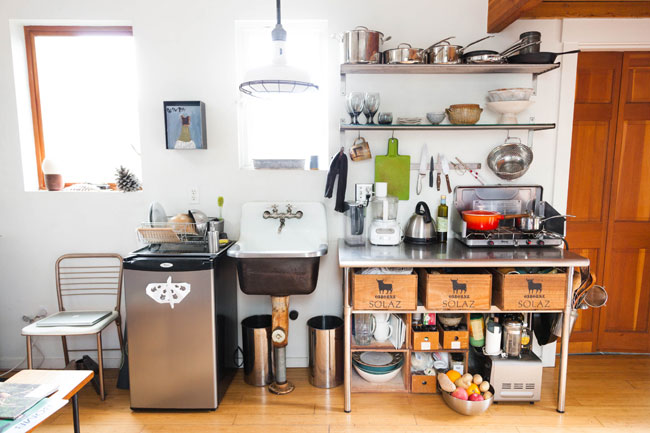 If there is anything that pairs well with the soggy mood swings of early spring in the Pacific Northwest, where I live, it is a good bowl of hearty soup. Regardless of the season, having a broth-based staple on the weekly menu helps keep even the busiest Seattle household afloat. Over the last decade, our region also has found itself at the forefront of the tiny house movement, with a growing community of people simplifying their way of life as a means of minimizing their carbon footprint. So, how do these two very Northwest things intersect? Let me start from the beginning …

This past winter, my husband and I developed a recipe based on a classic Southwestern dish: Green Chile Chicken Stew. With a base of chicken broth and generous helpings of sautéed mirepoix, chicken breast, and short-grain brown rice, we were able to create something that was as simple to make as it was satisfying to the palate. We then decided to kick it up a few hot notches, and thus, Six Chile Chicken Stew was born. It’s proved to be a great dish for brisk spring evenings, too. 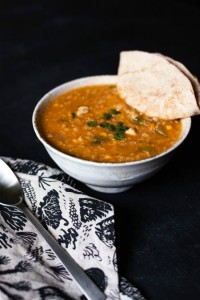 The soup quickly became a big part of our Sunday tradition. We started in the morning at the farmers market, stocking up on fresh produce and spices, and spent the afternoon in the kitchen making a meal that would last until hump day. Not to mention this dish saves us money: All of the ingredients for making 10–12 servings of the stew total less than $50.

As an interior photographer, I have seen and documented a fair number of tiny homes. With each charming small space I’ve toured, I’ve become more and more curious about the practicality of daily life in these minimalist abodes. Are they really, truly livable in the long term? I’ve seen spaces that could best be likened to a children’s playhouse, with all of the amenities of a conventionally sized home adorably compounded into fewer square feet. I’ve also seen spaces that are very minimally outfitted, where the living area is as comfortable as a rustic mountain camping cabin. As an avid cook, I took note of the kitchens in these homes, and began to wonder what orchestrating a sizable meal would be like in a compact space. How would it compare to my own kitchen? What would be the trade-offs? 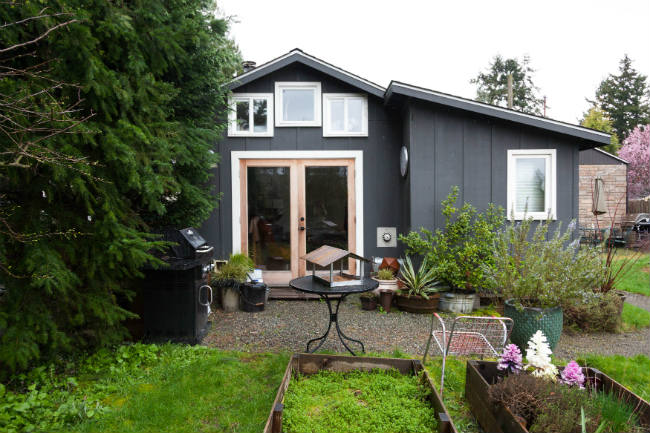 After scouting a few tiny homes in the Seattle area, I stumbled upon the perfectly appointed living space of artist Michelle de la Vega, and she was kind enough to open up her home to us for this tasty experiment. When she purchased her house more than a decade ago, Michelle decided that she would rent out the single-family unit at the front of the property and spearhead a custom renovation of the stand-alone garage in the backyard that would become her living quarters. Today, the home boasts an airy 250 square feet, with a lofted sleeping area, a private bathroom with a clawfoot bathtub, and plenty of big windows to let in natural light. One of my favorite features of the home is the high ceilings that give the space a feeling of refreshing openness. Over the years, Michelle has cooked many meals in the home’s petite kitchen, which is equipped with a two-burner gas camping stove, a sink, and an industrial metal counter that runs along one wall of the house. It was indeed the perfect stage for preparing and cooking this meal.

At my house, entertaining friends while working in the kitchen is an art form in which I have begrudgingly become well-versed; I always intend to be finished cooking before the guests arrive, but, in all honesty, that is rarely the case. Hosting a dinner party is often needlessly stressful for me, as I attempt to balance good conversation in a hot, cramped kitchen while trying not to burn the main course. So, one of my favorite parts of making a meal in the tiny house was its open floor plan. The simplicity of the space—one large, airy room (aside from the bathroom, of course)—made it easy to chat with Michelle while she sat in the living room and I cooked in a stress-free environment. I wasn’t constantly running back and forth between rooms, or feeling left out of a conversation while being sequestered in the kitchen.

Everything I needed was within my reach; each stew-making step was seamless. I didn’t waste time searching through cupboards or drawers looking for the right pot or dish or knife. The streamlined way in which the kitchen was outfitted was both functional and inspiring. After the experience, I went home and tossed out a few unnecessary items of cookware that were taking up space and clogging up my meal-making workflow. I mean, honestly, who needs three 12-inch non-stick skillets? Would I ever need to pan-fry that many things at once?

My biggest hang-up while cooking in a tiny kitchen was the lack of burner space. Rather than sautéeing the mirepoix while browning the chicken and boiling the rice all at once, like I normally would, I had to limit myself to two tasks at a time, which nearly doubled the cooking time. A personality like mine loves to multitask, so I found this to be the most noticeable drawback during the whole process.

Comfortably interacting with guests while cooking in a tiny house is a perk that would make hosting a meal less of a lonely endeavor for the chef, which would in turn make the whole experience more gratifying. But, though I do enjoy every moment I spend in the kitchen, a significantly longer cooking time isn’t something that I would willingly choose over the swiftness of working in a conventional kitchen. Though I may err on the more traditional side of this issue, I do tip my hat to Michelle, and all of the tiny house cooks out there. Your patience and perseverance in the kitchen is paramount, and I salute you for it!