Unlike The US, Europe Is Setting Ambitious Targets For Producing More Organic Food 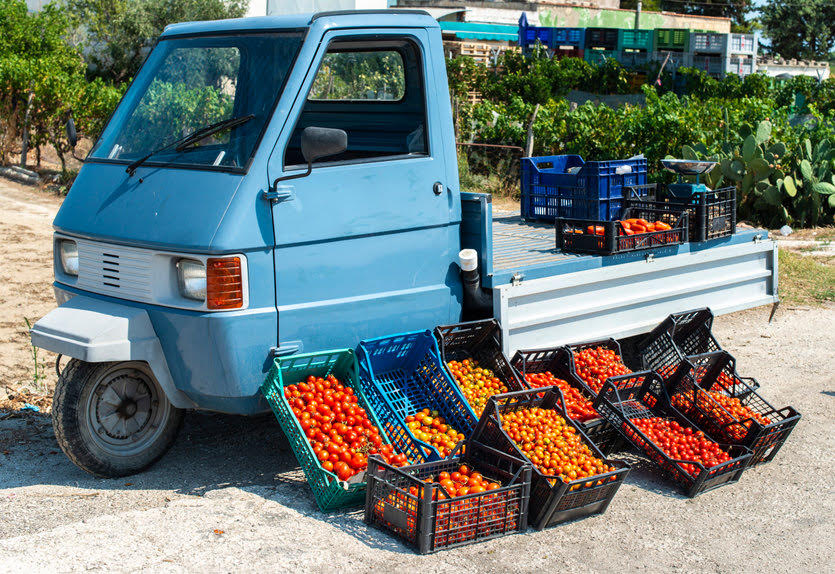 President Joe Biden has called for an all-of-government response to climate change that looks for solutions and opportunities in every sector of the U.S. economy. That includes agriculture, which emits over 600 million metric tons of carbon dioxide equivalent every year – more than the total national emissions of the United Kingdom, Australia, France or Italy.

Recent polls show that a majority of Americans are concerned about climate change and willing to make lifestyle changes to address it. Other surveys show that many U.S. consumers are worried about possible health risks of eating food produced with pesticides, antibiotics and hormones.

One way to address all of these concerns is to expand organic agriculture. Organic production generates fewer greenhouse gas emissions than conventional farming, largely because it doesn’t use synthetic nitrogen fertilizer. And it prohibits using synthetic pesticides and giving hormones or antibiotics to livestock.

But the U.S. isn’t currently setting the bar high for growing its organic sector. Across the Atlantic, Europe has a much more focused, aggressive strategy.

The EU’S Farm To Fork Plan

The European Union’s Farm to Fork strategy, often described as the heart of the European Green Deal, was adopted in 2020 and strengthened in October 2021. It sets forth ambitious 2030 targets: a 50% cut in greenhouse gas emissions from agriculture, a 50% cut in pesticide use and a 20% cut in fertilizer use.

Recognizing that organic production can make important contributions to these goals, the policy calls for increasing the percentage of EU farmland under organic management from 8.1% to 25% by 2030. The European Parliament has adopted a detailed organic plan to achieve this goal.

Today the U.S. is the world’s largest organic marketplace, with US$51 billion in sales in 2019. But the EU is not far behind, at $46 billion, and if it achieves its Farm to Fork targets, it is likely to become the global leader.

And that ambition is reflected in national food policies. For example, in Copenhagen 88% of ingredients in meals served at the city’s 1,000 public schools are organic. Similarly, in Italy school meals in more than 13,000 schools countrywide contain organic ingredients.

The US And The European Union Are The World’s Two Largest Organic Markets, But Only The EU Has A Growth Plan

All data are for 2019, with Euros converted to dollars at 1.12 Euro/dollar. *The U.S. does not count organic farmers – 16,585 represents the number of organic farms, some of which have more than one farmer.

The U.S. Strategy Is Technology-Driven

In contrast with the EU, the U.S. has no plan at the national level for expanding organic production, or even a plan to make a plan.

Less than 1% of U.S. farmland – about 5.6 million acres (2.3 million hectares) is farmed according to national organic standards, compared with 36 million acres (14.6 million hectares) in the EU. This small sector doesn’t produce enough organic food to meet consumer demand, so much of the organic food consumed in the U.S. is imported from nearly 45,000 foreign operations. While the U.S. government tracks imports of only 100 organic food products – a small sliver of what comes in – spending in 2020 on these items alone exceeded $2.5 billion.

I see this gap as a huge missed opportunity. President Biden has called for a “Buy American” strategy to bolster the U.S. economy, but today consumers are spending money on organic imports without reaping the environmental or economic benefits of having more land under organic management. More domestic production would improve soil and water quality and create jobs in rural areas. 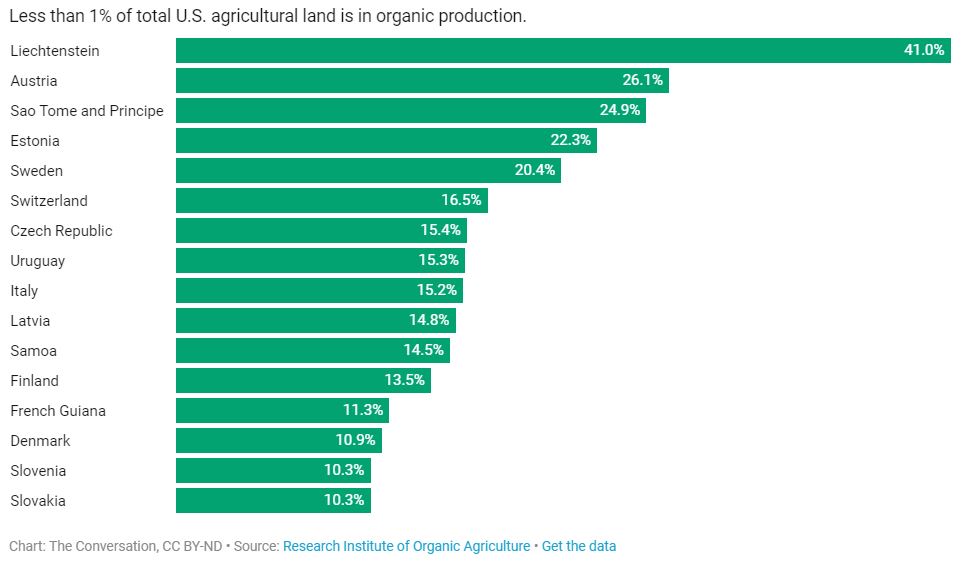 While the U.S. and the EU are working together to address agriculture’s contribution to climate change, they have very different views on the role of organic farming. At a U.N. Food Systems Summit on Sept. 23, 2021, Agriculture Secretary Tom Vilsack launched a new international coalition on sustainable productivity growth, calling on countries and organizations to join the U.S. in the cause of increasing yields to feed a growing world population. In his press briefings, Vilsack promoted voluntary, incentive-based and technological approaches to producing more food, such as gene editing, precision agriculture and artificial intelligence.

Vilsack asserts that the European Union’s emphasis on organic production will reduce output and push up food prices. This argument reflects a long-standing debate about whether organic farming can produce enough food to meet demand while using fewer chemical inputs.

The strongest support for the USDA strategy is no surprise. It comes mostly from conventional agriculture groups, including Syngenta, Bayer and Corteva – three of the four largest global agrichemical companies – along with their lobbying arm, CropLife America.

In my view, these U.S. talking points are outdated. The world’s farmers already produce enough food to feed the world. The question is why many people still go hungry when production increases year over year.

Addressing agriculture’s role in climate change means changing how nations produce, process, transport, consume and waste food. I believe that when leaders call for cutting-edge, science-based solutions, they need to embrace and support a broad spectrum of science, including agroecology – sustainable farming that works with nature and reduces reliance on external inputs like fertilizers and pesticides.

The Biden-Harris administration could do this by developing a comprehensive plan to realize the untapped potential of organic agriculture, with clear goals and strategies to increase organic production and with it, the number of organic farmers. Consumers are ready to buy what U.S. organic farmers raise.