The experience of walking is primordial. All land-based creatures, great and small, do it. Humans have been relying on this primary activity of daily life for as long as we have been around. Though on two legs we cannot match the speed of most animals, humans, nevertheless, can move with direction, determination, purpose and intention.

What is it in a person's way of walking that looks good, that resonates with us, that has a certain elegance to it, a sense of togetherness, confidence, power and endurance, yet is relaxed and seemingly attractive and enjoyable?

A few years ago, a research group from MIT decided to study African women and the way they walk. Unique to them, and by extension to Indian and South American women (and even men), was their ability to move in such a way that they could maintain biomechanically erect posture for miles on end, as well as walk at average speeds far excelling what we generally are able to do. And all this while carrying heavy objects on their head – and, with no known cases of cervical strain! What they had learned over millennia was to sense how to organize their bodies around the center of gravity which is a point of neutralizing forces and feeling light in their gait.

How Does Walking Really Work? 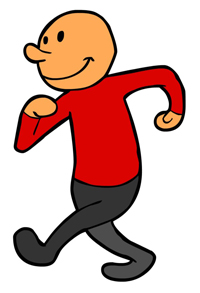 Due to the office and couch-bound sedentary lives which we lead, most of us suffer the ill effects of excessive sitting on our bodies which do not get the real benefits of walking. Some even have increasing difficulty walking as they get older – an unfortunate and unnecessary condition! If we look at the body in a scientific way, we can describe the biomechanics of walking for an upright creature with only two legs like this: all the ground reaction force must find its way through a vertical segmented body, that is, via all the joints of the legs, the hips, and the spine. No easy task. Every time I push the ground with my straightened, thrusting leg I am structurally designed to be able to direct the vector of force across these segments, linking muscles and connective tissue (which we will call myofascial pathways) in such a way as to maintain an effortless erect posture that is also moving my entire body through space. Sounds difficult? It isn't, but it does require some awareness and relearning to put bad habits aside which the body has acquired to compensate for the effects of excessive sitting.

The African men and women who had to travel long distances in hot climates, and perhaps similar folk like the American Indians who continuously moved long distances to summer and winter camps, not only walked at a sustained clip, but had to learn ease, efficiency, and resistance-free gliding movements. To do this their bodies moved so that their hips could perform a powerful triple energy-generating action, much like a camshaft that turns an engine or a spinning octopus ride at an amusement park. The action has even been described as three propeller-like actions of the pelvis. When the hips are synchronized to move in the three-directional actions dictated by their very structure, the kinetic energy so generated can travel up through the spine and articulate with the ribs. This generates a spiralic force which turns the torso and is carried through the shoulder girdle and arms. The walker who knows how to access this pathway of vector energy experiences an elongation of the spine and the neck. Ever notice how certain people look tall and beautifully extended in walking, dancing or performing? This happens naturally by the very design of our body, but the program can also be activated by learning so we humans can walk true to our potential nature.

Sad to say, ever since we started bending from the upper body forward at a young age, usually associated with the early imposition of school and the new industrial life style, problems with musculo-skeletal pain have soared. Walking has been compromised. Today the vast majority of the population that walks can be observed to be lacking an efficient and working cooperation between the lower and the upper body. Some of this is due to cultural inhibition of moving the hips, especially for women, but the inescapable reality is this: the hips must move in all the directions dictated by their structure.

One of the key pieces of this puzzle of transforming pain and problems with walking into opportunities for vibrant wellbeing is for people to learn the basic fundamental movements of proper walking themselves. Dramatic improvements through this retraining have been recorded in my own files with a variety of people including those who have had problems of hip replacement, near hip replacement, knee problems, lower back problems and even physical conditions involving surgical fusions. Walking is the best exercise available to you, requires no special equipment, can be done solo or with partners and costs nothing. 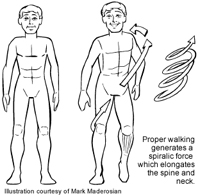 Walking upright requires an alignment with central gravity through the hips and pelvis which generate three essential actions to getting lift and forward power. The hips have to rotate laterally, extend and flex. That power is then transmitted to the spine and the ribs, which need to be in the best alignment to receive and transmit the vectors of force. What happens if the body isn't in the best alignment for these movements to occur? Imagine a car trying to go uphill in high gear. There is not enough power, the engine overheats and damage soon occurs. It is the same in a human body. If the hips are not generating the "horse power" because of restrictions in action, then you walk harder using the legs. The legs become stressed, often manifesting as knee or hip problems. If you recognize you are working too hard to walk, it is only matter of some sensing, learning and movement awareness to shift out of poor walking habits into a better way of walking to get the system functioning the way it was designed to do.

The key to this exercise is trial by experiment in order to sense differences and notice connections. Simply by doing and noticing, you start to activate your innate ability to feel the connection between pushing through a straightened leg and following that force as it travels through your body. It will probably rotate you slightly to the left if you are standing on your right leg or to the right if you are standing on your left leg.

Follow the force of this thrusting until you are clear where the end point is. Simply by doing this exercise, you are already developing movement awareness – the sensing of limbs, joint actions, resonant motion, lengthening and strengthening in an interconnected way. Once you start to cultivate the sensing of such connections, your walking will improve automatically.