Waste: The Defining Metaphor Of Our Herding Culture

Question: What can we do about the problem of food waste in the world?

In the U.S., for example, according to the NRDC, about 40 percent of the food that is actually produced is thrown away and never eaten. This is 750 million pounds of food—about 240 pounds of food per person—wasted every year. While it’s heartening that some groups, such as Food Not Bombs, can capture a tiny percentage of this and share it with some hungry people, it’s tragic that we tolerate such waste in a world with millions of malnourished people. Underlying this food wastage is an even more serious problem: structural waste. Producing food uses 50 percent of all land and 80 percent of all fresh water, and this is due to the inherent inefficiencies of animal agriculture: we’re eating grain that’s first been digested and converted by animals. Compared to a vegan diet, the standard Western diet requires 11 times as much petroleum, 13 times as much water, and 18 times as much land.

We recently learned that every year in the U.K., over a million lambs die of hypothermia. Because of the popularity of lamb for Easter dinner, ewes are forcibly impregnated earlier than would be natural, so their babies are born early in the year, assuring that these lambs can be profitably fattened up in time for the Easter slaughter. The million or so baby lambs that shiver and freeze to death in the icy February winds of the British Isles are just a cost of doing business and are considered an acceptable level of waste by the industry, and by our society. Dying by freezing to death is excruciating, and similar suffering and death is inflicted on baby lambs (and virtually all other types of farmed animals) in many parts of our world, including North America and Europe.

We understand that this abuse and waste of millions of baby lambs is just a drop in the ocean we humans relentlessly inflict on literally trillions of animals annually, primarily through our desire to eat them. Millions of newborn male chicks are suffocated or macerated annually by egg producers as waste byproducts of an industry that exploits females, and a similar fate awaits millions of calves in the dairy industry. In the fishing industry, “bycatch” is the euphemism employed to refer to millions of tons of fishes, turtles, dolphins, whales, and seabirds trapped in nets or on hooks, and discarded, dead, back into the ocean as non-target species. Underweight juvenile pigs are killed and discarded as waste by industry. Ranchers, farmers, fishers, and their agents, such as the infamous USDA Wildlife Services agency, poison, trap, shoot, and destroy millions of wild animals yearly, including coyotes, mustangs, bears, bobcats, raccoons, rabbits, deer, otters, seals, dolphins, cormorants, swans, and many more.

This rampant destruction of animals who are seen as mere disposable waste or as throwaway impediments is devastating on many levels, and follows inexorably from the essential core of our culture. Although it is not discussed openly, we live today in an industrialized herding society. Our world is fundamentally organized around herding animals, confining and killing them in both large-scale and small-scale operations, and trapping and killing them in fishing operations. The consequences of this radiate into every dimension of our public and private lives. 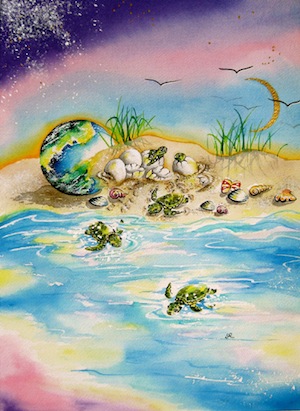 Where is this “away?”

The embarrassingly gross inefficiencies of animal agriculture are deliberately obscured, dismissed, and denied in our herding culture, but it’s nevertheless becoming obvious that eating animal-sourced foods is devastatingly wasteful to our oceans, rainforests, rivers, aquifers, fossil fuel supplies, air quality, climate stability, wildlife, and ecosystems, as well as to our physical, emotional, and cultural health. For example, in the U.S., livestock produce 116,000 pounds of waste (feces and urine) every second, over 3.5 trillion pounds annually, polluting air, rivers, and oceans, destroying soil and climate health, and killing wildlife and people. Animal agriculture is an engine of waste. It wastes water, petroleum, land, and massive quantities of grain and legumes that could feed starving children, whose lives are similarly wasted by this practice that wastes the lives of the billions of birds and mammals, and trillions of fishes who are consumed by our voracious appetites.

This waste is a form of violence and it takes many interconnected forms: the waste of vital resources, the waste of starving people’s lives and the war, misery, and conflict this causes, the waste of the animals themselves who are eaten only to directly contribute to the wasteful disease epidemics of diabetes, cancer, heart disease, obesity, autoimmune disease, dementia, and other maladies that cause more massive wastage of money, drugs, lives, time, energy, and resources. Looking more deeply, we see that our abuse of animals not only wastes their precious lives and health, and their purposes. We reap what we sow, and we inevitably find our lives, our health, and our purposes tend to be wasted in many ways as well.

This orgy of waste is obvious everywhere, and yet it is eerily invisible. We are suffocating in our pollution, and this physical waste is the outer manifestation of a deeper inner pollution that propels us to waste the opportunity of our valuable human life in pursuits that lead to more bombs, prisons, hospitals, and asylums. The desperation of the masses of our brothers and sisters who are seen as expendable commodities mirrors the desperation of the freezing lambs, the crushed male chicks, and the terrorized coyotes and mustangs. All are mere waste in the ongoing economic engine driven by the mentality of animal agriculture—the mentality of disrespect—that wasted the West and will reduce our inner and outer landscape to an utter wasteland if we don’t wake up soon. 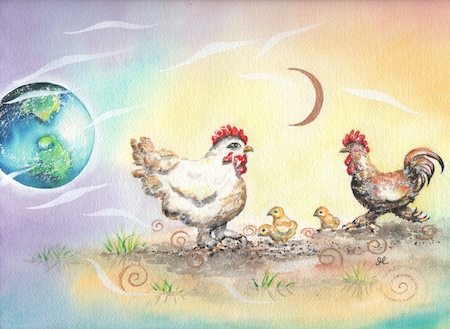 Vegan living is the essential antidote to this mentality of disrespect of others and oneself. I remember learning in the Zen meditation center about the importance of doing ones’ best to minimize waste, and to respect everything, especially food. We took just two vegan meals daily, and every grain of rice that we put into our bowls, we were obliged to eat. There was no “away” to throw that grain of rice. We made an effort to practice mindfulness in eating, walking, and sitting. When we needed some water, we learned to take only what we needed, and underlying everything was the idea that we are dependent on others and that they are worthy of our respect and gratitude. These others include streams, clouds, forests, fields, reefs, animals, humans, past and future generations and, ultimately, all living beings. We are interconnected with all life, and life is sacred. This can become clear to us when our minds become quiet through the practice of looking deeply and mindful awareness.

Like the abused animals we have been compelled to eat from infancy in this herding culture, we are all exploited. The same system that would waste their lives and opportunities would waste ours as well. Ironically and predictably, in this system, those of us who are the most extremely wasteful become the elite, with the highest status and wielding the most control. Thus the system churns on, relentlessly destructive and wasteful of everything it touches.

The greatest contribution we can make to our world today is to question the invisible mentality of waste that permeates our culture and attitudes, and move to a vegan way of living, both in our external actions, and in our inner attitudes. Going vegan is the single most potent way to dramatically reduce our environmental footprint and to treat the disease of wastefulness that defines the culture into which we were born. Every vegan is not only saving the lives of thousands of animals yearly, but also the lives of trees, forests, rivers, and oceans, and of hungry people and future generations.

It’s essential to understand and do our best to embody vegan values of respect for others and ourselves. Traveling and putting on lectures promoting vegan living, Madeleine and I have been to our fair share of vegan potlucks and meals over the years, and while they are delicious and inspiring, it is somewhat heartbreaking to see people take vegan food and then casually throw it away because they took too much. As vegans, we are called to demonstrate vegan living in every aspect of our lives as best we can, as respect and non-wastefulness of resources. This is the essence of the teaching, and brings freedom and joy into our lives, and empowers us to be an effective example for others.

How much more heartbreaking it is to see people taking nonvegan food and nonchalantly throwing it away, without respect for the being who gave her precious life for that so-called food. I have met vegans who are so dismayed by this that they ask if perhaps they should eat this flesh and cheese in order to respect the exploited animal, and the huge quantities of grain, water, petroleum, and toxic chemicals required in the production of this “food.” Just as it’s essential to see that nonvegan foods are not actually food at all, but violence, it’s essential to see that waste is not just waste. It’s an explicit and harmful form of violence. 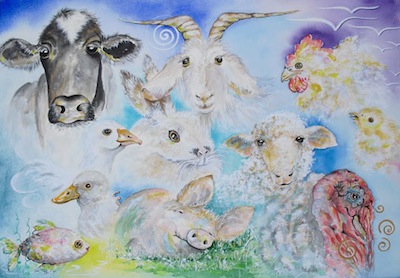 Here is the liberating and inspiring paradox: by practicing respect and conservation, we don’t experience deprivation but rather a greater sense of appreciation and abundance, and a heightened sensitivity to the beauty and bounty of life around us. Vegan living is the path to abundance for everyone, where with awareness we can co-create harmonious and equitable relations and fulfill our purpose on this Earth. Thanks for caring, and for questioning the toxic mentality of waste injected into all of us by our obsolete herding culture. A more conscious world is yearning to be born. It’s up to each of us.

Dr. Will Tuttle is an award-winning visionary speaker, educator, author, and musician. A former Zen monk with a Ph.D. from U.C., Berkeley, and a vegan since 1980, his writings, music, and presentations focus on compassion, creativity, intuition, and the intersectionality of social justice, animal liberation, and environmental, health, spiritual, and peace issues.

This article was republished from the World Peace Diet website.

See also:
Awakening From Materialism: Vegans As Healers
Veganism in a Nutshell