We Know The Wrong Way To Deal With E-Waste. But What Should We Do Instead?

Rajesh was just 10 years old when we met. His days were spent standing on tiptoe to dunk computer circuit boards into big vats of hot acid. He had gloves but no goggles, and the acid splashed his shirt. He had an incessant cough and drank alcohol at night to ward off dizziness caused by the fumes.

Rajesh had moved with his older brother from the Indian countryside to work in Mandoli, a suburb of the Indian capital New Delhi, which has become a charnel house of the digital world. The vats of acid that he tended removed the copper from the circuit boards so it could then be sold to a nearby factory that made copper wire. Somebody made a profit. But in the acrid air and with local well water contaminated by toxic metals, Rajesh’s future looked bleak

This scene in Mandoli is a disturbing face of a vast global business in recycling electronic waste. Between 20 and 50 million metric tons (22 and 55 million tons) of used computers, TVs, air conditioners, mobile phones, refrigerators, light bulbs and other e-waste is produced every year around the world. All of it has to go somewhere, and all of it contains valuable metals — including toxic lead, cadmium and mercury — that are worth reclaiming for future use.

Right now the “urban mining” of precious metals from e-waste is largely an environmental and social nightmare, polluting landscapes and poisoning its practitioners.

Contrast Mandoli with the scene at Skellefteå, a neat Swedish gold-mining town close to the Arctic Circle with a famous hockey team. Here a giant industrial smelter operated by Boliden, one of the world’s largest e-waste recycling companies, last year smelted almost 80,000 metric tons (88,000 tons) of scrap e-waste, much of it circuit boards cut from European computers and mobile phones, to extract copper, gold, silver and other precious metals. No vats of acid; no acrid fumes; no 10-year-old workers.

The automated process operates to European environmental and health and safety standards. It is equipped with systems to clean process gases and prevent dust releases. Waste heat generated during smelting is circulated to heat local buildings; and the scant leftovers from smelting are buried in purpose-build stores under the site. 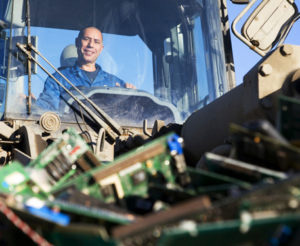 Could this bode a better future for e-waste? Perhaps so. Mainstream metals refining companies are now sniffing profits from e-waste and touting for business from the U.S. to China.

Umicore in Hoboken, Belgium, a longstanding European metals refiner, is getting ever more of its raw materials from e-waste. The company’s director of European Union government affairs, Christian Hagelüken, says its smelters can extract 400 grams (14 ounces) of gold from a metric ton (1.1 tons) of mobile phones, along with copper, silver, lead, tin and indium. After smelting, the metals in the waste stream are chemically separated. The plastic casings go into the smelter, where they are burned to provide most of the fuel for the facility.

“Over 95 percent of the feed is turned into useful products,” Hageluken says. The final 5 percent includes toxic elements like mercury and cadmium that have to be disposed of “in a safe way,” plus slag that is used for constructing flood-protection dikes along the Belgian coast.

Such advanced processing plants are also turning up in the developing world. China in particular is keen to replace its notorious e-waste villages with high-tech e-waste metals recovery. Its flagship company, GEM Co. Ltd., says on its website that it aims “to become the world leader in green enterprises.”

Not every Chinese company is so fastidious as GEM claims to be, however. When Thai police raided the Chinese-owned Wai Mei Dat Recycling complex east of Bangkok in May this year, they found illegal workers burning waste in the open and spewing dioxin from plastics into the air. The surreptitious site had been found by the Basel Action Network (BAN), a non-governmental organization that researches international trade in waste, using tracking devices attached to e-waste. 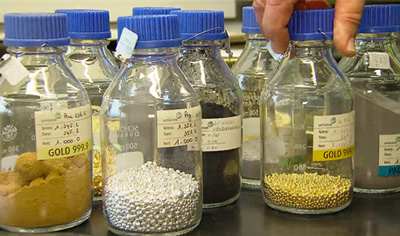 In the United States, most e-waste is landfilled. A study five years ago paid for by the U.S. Environmental Protection Agency estimated that 8.5 percent of collected e-waste was exported, with Mexico, Venezuela, Paraguay and China among the most popular destinations.

Some of that trade is legitimate. California-based ERI collects hundreds of thousands of tons of e-waste a year across the U.S., which it shreds and sells either to its partner Alcoa’s smelter in Massena, New York, or to LS Nikko, an established copper-smelting giant in South Korea.

But the BAN has accused several American companies of “scam recycling” — that is, advertising recycling services that simply export to places such as Pakistan and the Philippines where the waste is “smashed, burned or treated with dangerous chemicals” by migrant workers.

Some electronics manufacturers are taking the initiative to improve practice, however. Dell has been collecting old equipment for a decade to pass on to recyclers for the extraction of precious metals. Apple recently rolled out a robot able to dismantle iPhones, sorting components for ease of recycling “so we can recover materials that traditional recyclers can’t,” according to the company’s 2018 environmental responsibility report.

The company claims to recover aluminum, cobalt, copper, tungsten, tin, silver, tantalum, gold, palladium and various rare earths. It intends to install the robot, known as Daisy, in many consumer countries, with the eventual aim of using only recycled materials in its production processes.

E-waste recycling is about more than good housekeeping. What is really driving the industry is the discovery that, in a world where the prices of metals are rising and most conventional mines are in distant countries with poor-grade ores, urban mining of e-waste is good business.

Copper and gold, which make up more than half the value in e-waste, are now often cheaper to obtain from jettisoned products, says Xianlai Zeng, an associate professor of solid waste management at Tsinghua University in Bejing, China. “Urban mining of e-waste is becoming more cost-effective than virgin mining,” he concluded in a recent paper, after studying the economics of eight recycling plants in the country.

This is not so surprising. There is more gold in a ton of mobile phones than in a ton of ore from a gold mine. One estimate is that all the e-waste discarded annually round the world contains more than 300 tons of gold.

Zeng’s analysis concluded that, with some government subsidies, urban mining in China could recover copper at less than US$2 a kilogram (2 pounds), which is less than a third of the international market price.

“The total value of all raw materials present in e-waste is estimated at approximately US$55 billion in 2016, which is more than the 2016 gross domestic product of most countries in the world,” says Cornelis Balde, a researcher with the United Nations University to Tokyo.

Some fear that the potential profits from urban mining will lead to an upsurge in rogue operators, with escalating environmental and safety hazards. But more likely — just as poor regular miners soon get muscled out by big corporations when a new geological seam provides rich pickings — urban mines will soon be the preserve of the big operators.

Yet they have a ways to go. Zeng estimates only 20 percent of e-waste is currently handled by the “clean” sector of big companies using largely automated processes. About 40 percent ends up in places like Mandoli, in China’s notorious villages around Guiyu in Guangdong province, or in Agbogbloshie, a district in Accra, the capital of Ghana, which some say is currently the world’s largest e-waste dump. The remaining 40 percent is uncharted, often stored in drawers or attics or disposed of in landfills.

“There are huge business opportunities in e-waste recycling, especially in the big countries of e-waste generation,” says Zeng. So sending our e-waste to the back streets of India and China is not only ethically unacceptable, it is also a missed business opportunity at home.

Many ethically concerned consumers are conflicted about recycling e-waste. They applaud the virtues of recycling, but fear the stuff they are done with may end up polluting a Chinese village or poisoning Indian children. With increased awareness of the opportunities in urban mining, that dilemma could soon end.

Fred Pearce is a freelance author and journalist based in London. A former news editor of New Scientist magazine, he has been its environment consultant since 1992, reporting in that time from 85 countries. He also writes regularly for Yale e360 and the Guardian.

See also:
The Biggest Problem With E-waste? What We Don’t Know.
EarthTalk: Endangered Grizzlies And Strategies For E-Waste