What Are Microplastics? And What Can Be Done About Them? 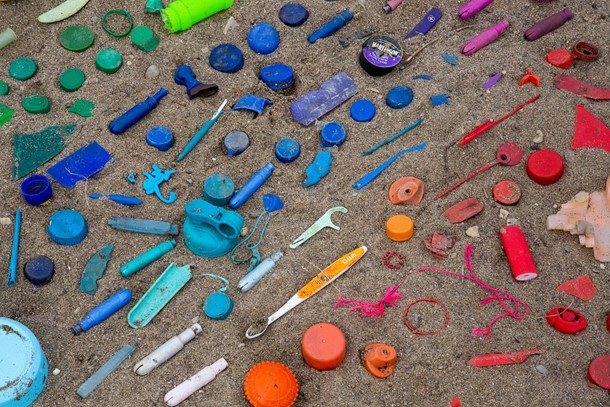 It’s no secret that plastics are causing major environmental troubles on the planet. Plastic materials don’t degrade quickly and they are generally composed of harsh chemicals, meaning that they remain in the environment and cause problems for a long time. One of the largest and most well-known plastic problems is the giant plastic trash island that is floating around in the Pacific Ocean.

The plastic problem is not one that is likely to go away anytime soon. Our dependence upon the material in nearly every aspect of our lives is only growing. However, much of the plastics we use have a limited life span — some will even end up in the trash after a single, quick use. Scientists estimate that every minute approximately one truckload of trash ends up in the ocean.

Though large pieces of plastic trash polluting our oceans is a very serious problem, there are many other, equally pressing concerns associated with plastic waste. Of these, perhaps the most challenging — and quite frankly terrifying — is microplastics.

Microplastics are defined as those pieces and particles of plastic that measure less than 5 millimeters in length. An even smaller subcategory of microplastics includes nanoplastics which measure less than 100 nanometers. Both are created as small pieces of plastic slough off of the larger item. Often this happens because of agitation such as in a washer or because the plastic becomes old and brittle and starts to break into small pieces.

These minuscule pieces of plastic are incredibly difficult to remove from bodies of water and most traditional water treatment methods simply don’t work. Fish and other wildlife can easily confuse microplastics with foods like phytoplankton and zooplankton which they depend upon for survival. Though these plastic pieces fill their stomachs, they provide no sort of nutritional value and many animals starve as a result. Those that survive often have a high concentration of plastics that are passed on up the food chain.

No definitive evidence has linked the consumption of microplastics to negative outcomes in human health. However, there is no doubt that we are consuming them. Microplastics have been found in the food we eat, the air we breathe, and, especially, the water we drink. Research extrapolating the results of over 50 studies on the topic suggests that the average human could be consuming up to 5 grams of plastic per week. That’s about a credit card’s worth!

The one good thing about the situation is that scientists and world leaders are aware of it and many are dedicated to addressing the issue. Numerous new ideas for combatting our pollution problems, especially those associated with plastics, are on the horizon. For instance, many private companies can donate money to environmental research and cleanup activities as part of their efforts to become more sustainable. Likewise, some of the biggest polluters are required by the federal government to participate in the environmental remediation process.

Some of the most exciting developments to address microplastics are very new and not necessarily in commercial production yet. One example is an electrolytic wastewater treatment option that can break microplastics down to carbon dioxide and water components. The treatment could be most useful in cleaning commercial laundry water which is notorious for having a higher concentration of microplastics.

Another recently developed technology was created by an 18-year-old student. The tech uses a magnetic liquid concept originally created by NASA to attract and extract microplastics from the water. The concept has the potential to make a significant difference in wastewater treatment as well as potentially address small bodies of open water.

How You Can Help

There is also a lot that the average person can do at home to help begin to turn the tide on microplastics. Finding ways to reduce plastic consumption is one of the most significant. Small decisions such as choosing paper over plastic, reusing plastic items where possible, and giving up single-use plastic items can make a monumental difference over the course of even a year.

Certain products such as glitter are also easy things to give up that make a difference. Glitter is basically just packaged micro- and nanoplastics. Choosing alternatives to glitter for crafty occasions could save the family a huge mess as well as do a small thing to save the environment.

Finally, it is worth evaluating frequently purchased products. Where are these products coming from, how long is the supply chain, and what is the company doing to address its own environmental waste production? There are a lot of companies that are trying to become more sustainable; it is worth looking into a cleaner option for household products.

Microplastics pose a monumental risk to the ecosystems and wildlife that form the foundation of our ability to live on this planet. There are very real risks to not addressing the concern. Fortunately, many scientists are developing strategies to begin working on the problem. There are many things that an individual can do at home to help solve the problem including finding ways to give up plastics in their lives.

Frankie Wallace is a freelance writer from the Pacific Northwest. She enjoys writing about health, wellness and environmentalism, but occasionally goes back to her roots with socially active journalism. Frankie spends her free time gardening or off hiking in the mountains of the PNW with her loved ones.