What If We Believed Anything Was Possible? 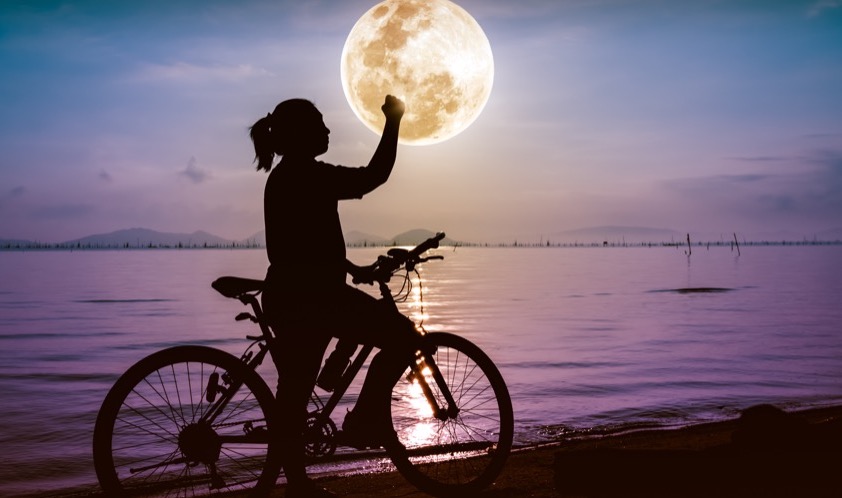 At the height of summer, at the end of a day of kids in the pool and cupcake-eating while grown-ups sipped glasses of chilled wine in celebration of our child’s birthday, I stood in our backyard hugging our freshly turned 10-year-old. The sun was down, the party guests had left, and my child began asking me questions I couldn’t answer—Why do grown-ups like to drink wine? Why do you hug me so much? What do you remember about being 10?—when a bright light appeared just over the roof of our house. It was as big as the biggest full moon we’d ever seen and as bright as a spotlight from a film set. The glow was so intense that the light’s source was undetectable.

“Is that a helicopter?” I wondered.

“Yeah. I think it’s a helicopter,” said my child, with arms still wrapped around me, as the glowing light passed from east to west, moving along the peak of the roof.

“But I don’t hear anything. No blades. No chop. No voices,” except our own as we looked to the sky trying to understand what we were seeing.

“Then I think it’s from outer space,” my child said.

“Yeah, maybe,” I replied, curious, but believing for a moment that perhaps it could be a spaceship, while holding my 10-year-old tight and watching the now-blue-green-white ball disappear after about five seconds. It slipped behind the blackness of our neighbor’s silhouetted tree and vanished.

They shrugged. “I don’t know.”

“I’m so confused. I’ve never seen anything like that.”

The reply: “Me either.” She then untangled from my embrace, adding, “Can I have another cupcake?”

The glowing light was gone. The questions were done. The trying to understand something that made no sense was over.

While not all of us have been faced with wondering if they’ve just seen a UFO, we’re each faced, daily, with things that don’t make sense, especially in our political climate. We’re confronted with the reality that people are denied the right to make decisions about their own bodies; that children can fall victim to gun violence in their classrooms; that our planet is being ravaged by climate catastrophes; that an angry mob can violently try to overthrow this country’s peaceful transition of leadership.

In these bewildering times, all the things we don’t understand can feel surreal and uncomfortable—generating a tidal wave of confusion and anxiety that could make one shut down and get a cupcake.

But have we been trained to believe that it’s easier to shut down than to try to understand what might be frightening? Are we losing our ability to make sense of things that we don’t want to make sense of? Does flinching at new information that veers from our sense of truth bring too much discomfort?

If true, we risk missing information and insights that could inform progress. But instead of shutting down, we might consider these three ways of staying open to new ideas and information, even disconcerting ones.

Ever do something that doesn’t make sense to you? Little things, like having a milkshake even when you know you are lactose intolerant. Or not flossing daily even though you know that flossing is essential to good oral health. We all do. In the field of psychology, this phenomenon is referred to as cognitive dissonance. I like to think of it as: “when-your-beliefs-don’t-align-with-your-actions-and-you-know-it.”

In 1957, Leon Festinger, the psychologist who coined the term cognitive dissonance, observed that people want their attitudes and behaviors to align because, well—people generally don’t like the discomfort that comes with self-contradiction. Yet it is the cognitive part of cognitive dissonance that causes the discomfort. In other words, we’re only uncomfortable when we’re cognizant of the self-contradiction. This awareness can trigger anxiety, which can prompt us to steer clear of certain conversations or settings to avoid the discomfort that comes with internal contradiction.

But here’s the thing: Avoiding the discomfort can interfere with how we manage contradictions within ourselves, and with those around us. If we don’t integrate competing beliefs, we’ll get stuck where we are and diminish our capacity for progress. This avoidance will perpetuate the behaviors that don’t align with our beliefs. And if we don’t exercise that contradiction muscle, it will atrophy.

As Austin-based family therapist Danielle Locklear recently explained to me, “Conflicting beliefs can lead to conflicting behaviors.” Specifically, “If we don’t give ourselves internal permission to stand by our choices, we may waffle when faced with the discomfort.” Locklear gave me the following example: “If I chose to abstain from drinking, but am aware of my friends’ expectation that I partake, I might choose to drink when I experience discomfort at a party.”

Since we all experience cognitive dissonance, the phenomenon provides us with a collective opportunity to exercise this contradiction muscle in small, low-stake ways. This isn’t a call to floss daily (though, you should!), but rather to bring our attention to the reasons we choose not to floss. Such a thought exercise can be a means of strengthening our ability to resolve inner and outer conflicts in preparation for bigger challenges.

In some instances of cognitive dissonance—I should avoid extra calories and this ice cream tastes so good—we double down and finish the entire pint, avoiding that part of your brain you don’t want to hear. Or you eat a cupcake because you don’t want to face the terrifying idea that you might have just been visited by aliens. Or maybe you storm the U.S. capitol buildings, doubling down because part of you believes that the elections were not rigged even if you outwardly say they were.

In other words, in order to align our actions with our beliefs, we go out of our way to reduce discomfort of contradiction either by refusing to accept the evidence (doubling down), or changing our views to be consistent with the evidence. Either way, the efforts we make to avoid the discomfort associated with the dissonance change our attitudes and reshape our truths—which, as it turns out, is not as hard as we would like to believe.

Trust That Truth Can Be Slippery

Many of us hold fast to the idea that “truth” is synonymous with “correct,” that true is the opposite of false, and this undergirds our understanding of “right” and “wrong.” But consider this very old idea: What if “truth” actually means something different?

According to etymologists, the word truth is derived from the Old English word triewð, which meant to be loyal or faithful. “To be true”—as in, to remain committed to a person, idea, or an attitude. The idea that something is true, as in factually correct, only appeared in the mid 1500s. But in 1952, assembling under the banner of the oldest sense of the word truth, a group of people calling themselves the Truth Squad trailed presidential hopeful Harry Truman on a whistle-stop tour to denounce what they called “his wild pitches.” Because Truman had veered away from generally accepted ideas and attitudes, the squad saw him as being untrue—which is not the same, but is often confused, with an untruth, or a lie. In essence, though, the Truth Squad had conflated the meanings.

In this day and age of fake-news politics, what if the emotional divisiveness surrounding truth and lies is simply the discomfort that comes with progress and less about a fight over facts? If we loosen our grip on the idea that truths are always facts, and instead accept that some things feel true to some and false to others, we make space for co-existing truths, and can push beyond division, toward progress.

That said, as historian James Loewen, author of Lies My Teacher Told Me: Everything Your American History Textbook Got Wrong, said, “People have a right to their own opinions but not to their own facts.”

Know That Fireballs Are Real, But May Not Be What You Think

Some might think that pondering a visit from outer space is delusional. But the big blue light in our backyard was, in fact, real. It was not a UFO. However, it was confirmed to be a meteor the size of a car entering the Earth’s atmosphere. It turns out, our discomfort with trying to understand what we were seeing robbed us of the opportunity of knowing that we were witnessing something pretty special. It was easier to walk away from something that made no sense and covet a cupcake for comfort, than to marvel at the verifiable fact that we were seeing something from outer space.

I only learned the details of the strange sighting three days after the event when a news alert about a giant fireball over Texas grabbed my eye. But I didn’t connect the splashy headline to what my child and I had seen until I read the story and learned that the date and time of the exploding fireball aligned with our backyard hug. Which is to say I still might not have believed that I saw a huge glowing light silently glide over my home if I couldn’t verify the event. And I would’ve missed a range of truths—that what I was seeing was real, even if it made no sense. That what I was seeing was otherworldly. That my child was right.

To be clear, I’m not suggesting that divisiveness is merely overcome by picking at our discomfort and questioning reality. I am an introverted person managing PTSD, so I get the value of relying on truths that make sense to me. Truths that help me feel protected and safe. But paying attention to our individual roles in this collective upheaval—how we manage our own truths—is something within our control, when everything seems out of control. I also know that polarization weakens our ability to find the solutions to the various ills that confound our society.

And in an era of WTF-is-going-on, paying attention to the discomfort, knowing that truth is slippery and anything is possible, might give us the answers we seek.

Lise Ragbir writes essays about race, immigration, arts and culture, and relationships. She has been published by Elle, the Guardian, Frieze, Hyperallergic, Time Magazine, USA Today, and Psychology Today, among others. She also co-edited ‘Collecting Black Studies: the Art of Material Culture,’ which was released in 2020.