What To Do About Gypsy Moths

They’re everywhere! Bouncing off windows, fluttering in doorways, clustering in swarms and dancing wildly around any human stuck in their flight path. And we thought the caterpillars were bad.

According to the Associated Press, this may be the worst infestation of gypsy moths since the 1980’s. Some attribute this to the unseasonably dry springs of 2014 and 2015, which prevented the growth of the fungus Entomophaga maimaga, lethal to gypsy moth larvae.

Now that they’re here, what can we do about them? Precious acres of trees are being defoliated, so much so that the Boston branch of the National Weather Service recently tweeted that it’s possible to observe the caterpillar-induced defoliation from space. How will our trees survive?

According to the US Department of Agriculture Forest Service, “The effects of defoliation depend primarily on the amount of foliage that is removed, the condition of the tree at the time it is defoliated, the number of consecutive defoliations, available soil moisture, and the species of host.

Gypsy moths have been a periodic problem in the U.S. since 1969, when it escaped from cultures maintained by a scientist trying to establish a “native” silk industry. It is identified as a destructive pest, causing individuals, and local and state governments to intervene.

The best way to attack a gypsy moth problem is to attempt non-chemical pest management strategies first. There are inherent risks associated with all pesticides, and a number of steps that can be taken as alternatives to chemical insecticides.

PREVENTION — Trees should be maintained in a healthy and vigorous condition. Remove debris that may provide shelter gypsy moth larvae.

MONITORING — Look for and destroy any egg masses in late summer, and again the following spring. 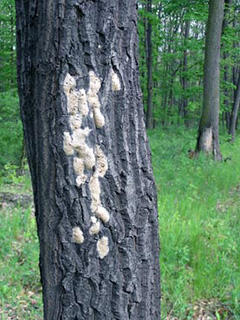 What Not to Do 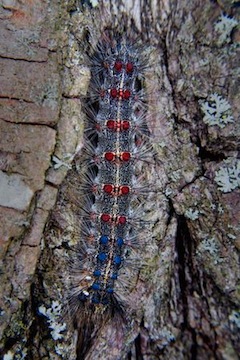 According to Mass Audubon, here are things NOT TO DO for gypsy moth prevention:

Do not use chemical pesticides. Despite extensive control programs using various insecticides – first DDT, now mainly carbaryl (Sevin) – the gypsy moth has steadily increased its range. Although these substances do kill the larvae and thereby protect the foliage in the year of application, the insects are never totally eliminated. Furthermore, insecticides also kill the insect predators and parasites of gypsy moths and interfere with other natural controls such as the virus that kills the caterpillars at high population densities. Applications of carbaryl or other pesticides may actually prolong or exacerbate outbreaks.

Gathering and destroying the caterpillars by hand is a waste of time and effort. You will lose because you will be greatly outnumbered by larvae.

Traps to catch and eliminate the gypsy moth chiefly benefit the seller. Traps are sometimes used by scientists to count numbers of larvae and predict outbreaks. Disparlure, a synthetic chemical that mimics the sex attractant of female gypsy moths, is used to lure male moths into traps. This will not control outbreaks, however, because there is no hope of trapping enough males to prevent females from mating.

Carol Bedrosian is the publisher of Spirit of Change.

See also:
Pesticide Reduction: A Goal For American Agriculture
We Must Save The Honeybees And Here’s How You Can Help