When You Can’t Read Anymore About Climate, Take Action

Getting involved with climate action can be a source of hope and inspiration. 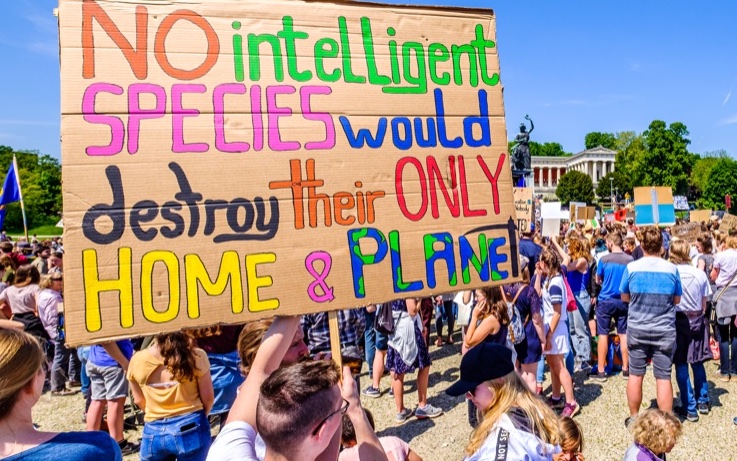 What’s the craziest thing you’ve ever done? It might have been something reckless or impulsive, adventurous, or just plain stupid. Here’s mine: I joined a group that works on creating solutions to climate change. Nuts, right? Who does stuff like that when the headlines remind us daily of our impending doom? Well, I did, and I’m learning that it’s not so crazy after all. I admit that when I simply recycled toilet paper rolls and bought LED lights, life was easier. Joining an organization and showing up was definitely out of my comfort zone, let alone actually meeting with my congresswoman. But it seems that every summer where I live in Southern California, the thermometer tops 100 degrees for days on end, and I’m pretty uncomfortable then too.

Now, I’m doing something, along with thousands of others, and together, we’re making a difference. I see it in the laws proposed in Congress and in state legislatures as well. By getting involved, I’ve also met a range of people who haven’t given up, who are determined to take whatever action they can to meet this crisis.

For years, the mainstream media told me who really cared about The Environment: latte-drinking, Volvo-driving elites, or else wild-haired, amoral, eco-terrorists. When I attended my local chapter meeting of Citizens’ Climate Lobby, I met folks who (possibly) drank lattes and (occasionally) had some hairs out of place, but who for the most part were passionate, clear-eyed, and determined. The more involved I got, the more inspired I became. I signed up to staff an info table at a local library event. With me was Rob, a scientist from the Jet Propulsion Laboratory and then the head of the local chapter. He knew all the facts backward and forward, but when he talked to people, he spoke from the heart. He encouraged me when, for the first time ever, I talked to total strangers about climate change, and he thanked me for my efforts when my shift was over. I had wanted this scientist to tell me that everything was going to be OK, that the powers that be would figure it out in time, but he never did. Instead, he showed me that every contact with another person—listening first and then responding—was the key to addressing our challenge.

How Climate Change Has Affected You

For years, I had been reluctant to take any action. Another statistic about the rise in Earth’s temperature or the depletion of the Greenland ice sheet didn’t make me bound out of bed, confident that I could actually do something about the climate catastrophe we’re in. I just sank deeper under the covers and wondered when my own personal climate disaster would strike. Scientists have been reporting on these phenomena for decades. It’s no surprise. Some of us have paid attention, but a lot of us have not. We’ve been busy, absorbed with the many moving parts of simply making it through the day.

The thing is, even if you haven’t decided to do anything about climate change yet, you have been affected. Perhaps it ruined your vacation or burned down your home, increased the price of food or destroyed your crops, flooded your basement or cut off your electricity. And even if (so far) you’ve escaped your personal climate catastrophe, you do feel the pain of others as they reckon with the strength of the wind or the oppression of the heat. And even if you don’t feel the pain of others, or can’t allow yourself, a part of you likely does feel afraid, or angry, or shocked because things are so unavoidably different from when you were a kid.

For a long time, even as I learned more about the impacts of climate chaos, I turned away from the overwhelming magnitude of the problem. I held on to the illusion that I could simply shop my way out of this thing. If I just bought the right products, then everything would be fine. I didn’t really need to eat strawberries every single month of the year. And who wouldn’t choose paper over plastic, even if everything I put in the paper bag was encased in some sort of plastic? In the face of weighty corporate and government lethargy, I was totally on board with doing my part by making smart consumer choices.

But as I looked around, I saw rich and powerful nations building seawalls and dredging river beds in Sisyphean attempts to “adapt” to climate change, while poor and less powerful countries bore the immediate brunt by way of famine and loss of homelands. No doubt I felt good putting my seasonal strawberries in a reusable bag, but I could only fool myself for so long. There was a reason my efforts felt futile. A vast disconnect existed between the small solutions I was offered as an individual and the enormous scale of the disaster. It took joining a group and working with all different folks who believed in taking action—teachers, engineers, retirees, filmmakers, students, caretakers—for my own focus to shift.

Thousands Are Already Tackling The Problem

The root challenge of confronting climate chaos comes down to energy and power. Usually, we think of the two words as synonyms, but in science, there’s a difference. The term energy refers to the ability of someone or something to do work. Power is the rate at which this work can be done. I know from volunteering with my local climate change group that there are a lot of regular people with the energy to do work who are already doing the work. And I can see that the people with the power to do something right now about climate change moving at far too slow a rate. That’s why it’s crucial that we use our energy as regular folks to bring pressure on the power held by corporate, financial, and political leaders. Their timelines are based on long-term earnings reports and election cycles, not on the rapid pace at which our climate is changing.

For me, the only way to crawl out from beneath the covers was to stop reading gloomy, catastrophic appraisals of the climate crisis. I didn’t want to remain ignorant, but learning more wasn’t going to influence my behavior. I already knew the alarming effects of global climate chaos. It was already a part of my daily life. Reading yet another article did little to inspire me to do something right now—in the moment—to help create change. And, equally important, reading those articles, as illuminating as they were, did not tell me the whole story. It was only a partial truth.

The rest of the story about the climate crisis is that thousands of people across the globe are already doing meaningful work to tackle the problem: They’re doing it collectively, together with others. And want to know an open secret? The oil and gas industry works collectively too, as they greenwash their products. The banking industry works cooperatively as they fund more oil drilling. World leaders sit down jointly as they make pledges with little intention of keeping them. No single company or government can pull off this massive refusal to address climate change on its own. They’re working in unison to do that. It’s how big things get done—or stopped. We’ve been told for years that if we make individual choices we can “help” fight global warming, but that’s not true. The way to tackle something that affects us all is by all of us working together.

But it gets even better, meaning more possible, more achievable. Other people have already figured out a lot. They’ve set up organizations and think tanks, websites and direct-action campaigns, affinity groups and conferences. People all over the world have done this—different ages, income levels, shoe sizes, religions, genders, skin colors, and political persuasions (conservatives too!). The Sunrise Movement was started by young people; Interfaith Power & Light by people in the religious community; Citizens’ Climate Lobby works for policy change across the political divide, while B the Change focuses on the business sector; the Hip Hop Caucus works on climate change from the perspective of Black people, Indigenous people, and other people of color; and the American Conservation Coalition is made up of conservatives who understand the magnitude of climate chaos. This tally is just a handful.

Listen, if you can handle reading the litany of daily red flags about what’s happening to our planet, then go ahead. Learn as much as you can. Let that be your inspiration to do something today. But if you’re like me and find yourself slipping into the slough of despond when you read that someone else declares it’s a lost cause, that COP26 was a wash, that the giant melting glacier in the Arctic is about to eliminate a lot of beachfront property, then stop reading. Turn off the podcast. Instead, find out what’s already happening anywhere in the world, including in your own neighborhood, and join in. You’ll feel better. You’ll be effective. Together, we’ll use our energy to create change to make people in power move at the rate we need to get the job done.

Meredith Rose has taught composition and literature at San Francisco City College. Her short stories have been published in a handful of literary magazines. With her life partner, she is raising two teenaged kids in Pasadena, CA.