Why We Need A Small Farm Future

In the 1990s, Indonesian kopi luwak – civet coffee, made from coffee beans that had passed through a civet’s digestive tract – became a new luxury commodity among wealthy coffee-lovers. Market dynamics being what they are, local producers cashed in on the demand by capturing and caging wild civets, force-feeding them coffee beans and selling the produce as cut-price kopi luwak. Though cheaper, the resulting coffee lacked the quality of the original conferred by the civet’s discerning nose, and came at the expense of ecological and animal welfare (1).

We live in a world of trade-offs. If you want genuine kopi luwak of good quality and low environmental impact you have to pay someone to comb through the forests looking for wild civet scat on your behalf. Humans can simulate the process and produce a similar product at lower cost, but it’s not the same.

It may sometimes be possible to find genuine trade-off free, win-win improvements. But with most things, including kopi luwak, and with agriculture in general, there are trade-offs. Improve on price and you lower animal welfare. Increase the yield and you also increase human labour, fossil fuels, or downstream pollution. And so on. Whether the cost of an improvement is worth its price is a value judgement that different people will weigh differently. But not everyone’s voice is heard, especially when the costs are offloaded onto the future.

In our bid to provide cheap food to our human multitudes, the trade-off is that a lot of people end up eating shit – figuratively and, as we’ve just seen, sometimes literally. But our culture is drawn to a narrative of constant progress – a narrative that compels us to avert our attention from this possibility raised by the economist Thomas Sowell: there are no ‘solutions,’ only trade-offs.

There are different ways of dealing with troublesome trade-offs or, in the words of futurologist Peter Frase, of ‘loving our monsters’. If human actions are driving pollinators to extinction, Frase suggests we ‘deepen our engagement with nature’ by developing robotic pseudo-bees to do the job instead. I won’t dwell here on how fanciful that is, but I will suggest a wholly different ‘monster’ we could choose to love if we so wished: an agriculture that doesn’t use poisons that kill bees, and instead favours more complex biological interventions, including more human labour. We could learn to love the immediate work in acting on the natural world as much as the mediated work of developing machines to do it. And we could also love the limits to action imposed by nature as much as we love to transcend them.

An obstacle to that kind of love is the narrative of progress I mentioned. Adopting low-tech, labour-intensive approaches to solving a problem or meeting a need, rather than high-tech, labour-substituting approaches is considered regressive, a nostalgic turning back of the clock, as if a historical ratchet prevents us from doing anything in the future that looks like things we did in the past. Actually, there is a ratchet that works like this – the capitalist political economy. The mistake we often make is to suppose that this ratchet is some implacable force of nature rather than just a particular way of organising society, itself with a history that may someday end.

These two monsters of overcoming versus restraint are becoming as significant a divide in contemporary politics as old schisms between right and left. Thomas Sowell distinguished between what he called ‘constrained’ and ‘unconstrained’ visions of human well-being, the former emphasising the optimisation of trade-offs within relatively immobile constraints, the latter emphasising perfectibility through the overcoming of constraints. The former is usually associated, like Sowell himself, with conservative thought. It encompasses a popular notion of capitalism as market exchange, the sum of innumerable transactions with no higher purpose or guiding hand emerging from the bounded rationality of people acting in their own immediate here and now. The unconstrained vision has usually been associated with the political left and its ideas of remoulding people to work collectively, achieving new goals and great things.

But these certainties are now dissolving. The neoliberal turn in global capitalism invests the hive mind of ‘the market’ itself with a kind of limit-busting, self-perfecting intelligence that brooks no opposition to any constraints human reason tries to put around it. And various strands of unconstrained leftism sign themselves up to this programme, becoming almost indistinguishable from the capitalism they supposedly reject. Witness books with titles like Fully Automated Luxury Communism or The People’s Republic of Walmart: How the World’s Biggest Corporations Are Laying the Foundation for Socialism.

In this emerging political landscape, conservatives inclined towards the constrained vision are discovering that there’s nothing especially constrained or conservative about corporate capitalism, while those on the left like me, unpersuaded by either corporate capitalism or attempts to tame it with glib left-wing versions of global industrialised plenty, are discovering a need to reappraise the idea of constraint and aspects of conservative politics informed by it. If we’re to bequeath a habitable and abundant planet to our descendants, a key part of that reappraisal involves rethinking the relevance of small farm or ‘peasant’ societies that are often dismissed for their ‘backwardness’ or buried under an unusable legacy of romanticism and nostalgia.

For these reasons, we need to consider some questions that modern political traditions have scarcely equipped us to answer with subtlety, or even to ask. What if the route out of widespread farming towards urban-industrial prosperity that today’s rich countries followed is no longer feasible for millions of poor people in ‘developing’ countries? What if that urban-industrial life in fact becomes increasingly unfeasible even in the rich countries in the face of various political, economic and ecological crises? How might the future of humanity then unfold? 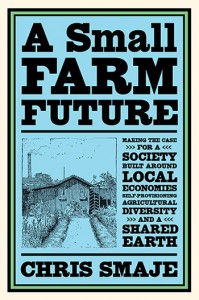 This excerpt is from Chris Smaje’s book A Small Farm Future: Making the Case for a Society Built Around Local Economies, Self-Provisioning, Agricultural Diversity, and a Shared Earth (Chelsea Green Publishing, October 2020) and is reprinted with permission from the publisher.

Chris Smaje has coworked a small farm in Somerset, southwest England, for the last fifteen years. Previously, he was a university-based social scientist, working in the Department of Sociology at the University of Surrey and the Department of Anthropology at Goldsmiths College on aspects of social policy, social identities and the environment. Since switching focus to the practice and politics of agroecology, he’s written for various publications such as The Land, Dark Mountain, Permaculture Magazine and Statistics Views, as well as academic journals such as Agroecology and Sustainable Food Systems and the Journal of Consumer Culture. Smaje writes the blog Small Farm Future and is a featured author at resilience.org.