Why Your Urine Is Too Good To Waste

Almost all of the nitrogen and phosphorous we ingest comes out of our bodies—what if we could return it to the soil?

Follow Kim Nace into her bathroom. Yes, it’s okay; many people visit here, headquarters of the country’s first community urine recycling program. Let her show you the odorless, waterless toilet: a wooden box inset with a conventional toilet seat and lid. Under the lid, a large, clean hole in the back lets solid waste drop to a container in the basement. In the front, a wide, plastic funnel channels urine to an underground tank.

It’s the urine that captivates Nace, executive director of the Rich Earth Institute in Brattleboro, Vermont. For the past five years her organization has grown a movement of scientists, farmers, and volunteers seeking to answer the question: how can we intercept the nitrogen and phosphorous polluting our waterways, reroute it to farmers’ fields, and in the process, reduce reliance on chemical fertilizers?

The crux of their solution, it turns out, lies within each of us—and the choices we make in the bathroom.

What comes out of our bodies contains almost all of the nitrogen and phosphorous we ingest. Abe Noe-Hays, research director at the Rich Earth Institute, explains it this way: “When plants grow and produce food, that food is full of nitrogen and phosphorous. When we eat it, we rearrange the molecules, but the elements don’t go away; they come out dissolved in our urine. If we can return those elements to the soil, it really is giving back the very thing we took in the first place.”

Returning nitrogen and phosphorous to our waterways, however, is a different matter. Rain sweeps these nutrients off agricultural fields, away from newly fertilized lawns, out of wastewater treatment plants, and into groundwater and streams that lead to lakes and oceans. Algae and other water plants ingest these nutrients and flourish just like crops. These algal blooms deplete the oxygen that fish and aquatic organisms require, creating dead zones like those in the Gulf of Mexico and Chesapeake Bay. At least 15,000 water bodies in our country have poor water quality from excess nitrogen and phosphorous.

Fresh human urine looks weak but acts powerfully. According to Noe-Hays, it has a higher nitrogen-to-phosphorous ratio than cow manure. In one year, an adult can produce 125 gallons of urine, containing the equivalent of about eight pounds of total nitrogen and 0.8 pounds of phosphorous. That would fertilize enough wheat to make a loaf of bread every day of the year. Once urine enters the waste stream, it accounts for less than 1 percent of wastewater volume but three-quarters of its nitrogen and more than half of its phosphorous. 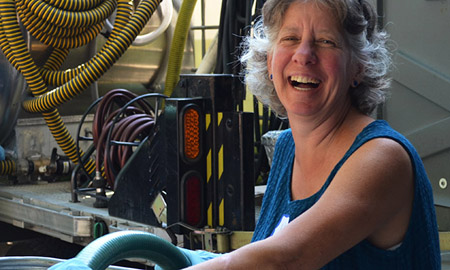 Urine diversion gained momentum across the Atlantic during the 1990s. Sweden pioneered the NoMix toilet and now has about 700,000 on-site sanitation systems, 60 percent of which serve residences. South Africa, China, Germany, the Netherlands, Switzerland, and Australia now showcase different systems, all in various stages of success.

When Nace and Noe-Hays started the Rich Earth Institute in 2011, only a handful of people were interested in their work. The duo was persistent, however, and their yin-yang partnership and sense of humor worked in their favor.

Noe-Hays is the wiry, intense-eyed inventor; Nace, the warm, open-faced networker. “Abe is extremely practical and grounded in the nuts and bolts,” Nace said. “I was the facilitator of his dream.”

With the help of several USDA Sustainable Agriculture Research and Education grants, they set up a urine recycling program to glean raw material for their research. In 2015, 100 people provided 5,000 gallons of urine, and in the process they saved 100,000 gallons of potable water. Collecting urine before it touched solid waste made it relatively easy to handle, with fewer pathogens than a combined slurry. Donors used five-gallon jugs with funnels and other urine-diverting toilets to collect pee, then either stored it in tanks for eventual pumping or drove it to Rich Earth.

The Rich Earth staff then began making urine-derived fertilizer (UDF). An early step was figuring out how to sanitize it. In storage, the urea in urine converts to ammonia, which raises the alkalinity to a level that’s inhospitable to pathogens. Storing urine for 30 days at 68 degrees sanitized the urine naturally, but for added assurance, and in preparation for sanitizing large batches, they began a pasteurization process.

They made another form of fertilizer by heating concentrated urine and adding magnesium chloride. The phosphorous in the urine separates out into greyish pearls called struvite, which is marketed in the United States as slow-release Crystal Green plant fertilizer.

“We thought it would be more difficult to persuade people to try this, but for those participating, something really resonated with the concept,” Noe-Hays said. “We have farmers who are signed up to receive urine fertilizer, and right now we’re limited by the amount of urine that we’re collecting.” 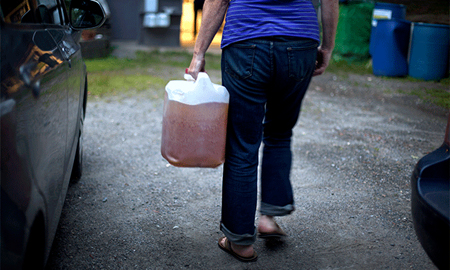 If you cringe at the thought of even collecting a urine sample for your doctor, you’re not alone. (Never mind that cow manure is spread on fields.) Most of us were taught that pee and poo are dirty. Granted, with poor sanitation, untreated feces can contain pathogens that spread serious diseases like cholera, dysentery, and typhoid. Unless it’s cross-contaminated with feces, however, urine from healthy people comes out pathogen-free.

“It’s mostly in the bathroom where we’re going to have the biggest challenge,” Nace said. Even with pasteurized urine, there’s still an ick factor. As a school principal in India, Nace witnessed lack of sanitation and outbreaks of disease that fueled her quest for sustainable solutions. Changing the diapers of her three children pretty much ended any aversion to human urine.

Diverting and using urine nationwide could conserve water, save energy, and reduce our dependence on synthetic fertilizers. Americans flush, on average, 90 gallons of water a day per household. Reclaiming water and nutrients from treatment plants requires energy—first to remove and dispose of garbage, then to remove water and transport the remaining biosolids.

But the real energy hog is secondary treatment, where air is pumped into the effluent so biological activity can digest the nutrients. By not sending as much urine or feces down the pipe, we can minimize the energy consumption at each step.

American farmers currently apply about 26 million tons of urea fertilizer annually. In 1999, manufacturing that fertilizer ate up 3 percent of our country’s entire natural gas production, equal to a third of all energy input for crop production. And it’s expensive: In 2012, U.S. corn farmers paid $200 an acre for fertilizer.

Many fertilizers also contain phosphorous, and, while we’re sending phosphorous down the tubes, access to cheap phosphate rock is diminishing. Scientists estimate that the United States will deplete its own supplies in a few decades. Producing a ton of phosphate generates heavy metals such as cadmium, plus five tons of radioactive phosphogypsum that must be stockpiled. Some experts say we have to reclaim urine if the globe is to retain an adequate supply of phosphorous for future generations.

“This is the right time to be exploring alternative options,” Nace said, “not just to divert urine out of the waste stream, but also to divert some of the funds and some of the brainpower of these engineers toward new technologies. I would like to see toilets become nutrient recovery systems.”

Last August Nace got closer to her wish. The National Science Foundation (NSF) awarded faculty at the University of Michigan and the University at Buffalo in New York, Rich Earth, and other partners a $3 million grant to assess the risks of using UDFs in food production.

According to Nancy Love, professor of engineering and principal investigator on the grant, the team will do a cradle-to-grave analysis and comparison that assesses the human health and environmental risks associated with using synthetic fertilizers, biosolids, and UDFs, and also the risks associated with making, transporting, and applying each type of fertilizer. “Frankly,” Love said, “We believe [a UDF] has the chance to be a lower risk product than the synthetic fertilizers that are used so widely today.” 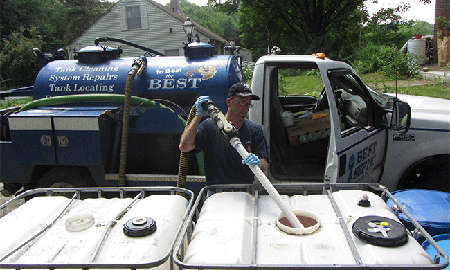 The team will also consider the fate of pharmaceuticals in UDFs. Diana Aga, an analytical chemist and professor at the University at Buffalo, has studied 10 persistent drugs found in waterways (including caffeine, antibiotics, antidepressants, and painkillers). She looked for pharmaceuticals in the soil, crops, and groundwater where Rich Earth had applied pasteurized urine to field-grown carrots, lettuce, and hay and determined that the amount taken up by the crops was so small it wasn’t a concern.

The team also discovered that struvite contained the least amount of pharmaceuticals. “It was a gift,” Aga said, “because while you’re trying to recover … phosphorous, in the end, you’re also getting rid of the pharmaceuticals.”

A large part of the NSF grant focuses on assessing public attitudes, framing the message about urine recycling, and piloting educational video clips. In a set of bathrooms at the University of Michigan’s G. G. Brown Laboratory building, Noe-Hays has been retrofitting one standard toilet and a conventional urinal to receive donations. If women choose the separating toilet or men choose the waterless urinal, their urine will drop one floor below to a covered tank, where it’s treated with vinegar, pasteurized, and concentrated. The finished product will be used for further research and spread on nonedible plantings at the university’s botanic gardens this spring.

Wide-scale acceptance will come incrementally—maybe urine-diverting toilets in sporting arenas, county fairs, festivals, and transport hubs. Noe-Hays envisions highway rest stops and parks as good places to start, as these are heavily trafficked and sometimes far from municipal sewers. He hopes urine will someday be collected from neighborhoods periodically, just like trash and recycling.

Nace thinks urine diversion can be introduced in new housing developments and in communities with nutrient pollution problems that can’t be fixed using existing infrastructure, especially places with sensitive watersheds and few financial resources for nutrient removal through tertiary treatment.

Scaling up demonstration—maybe even on nonfood crops like cotton—would strengthen attention and encourage people to replicate the systems Rich Earth and their partners have developed. All of this will take time and persistence, Nace acknowledges. “We’ve begun to find our place in the global movement.”

Carrie Koplinka-Loehr wrote this article for YES! Magazine. Carrie writes about ways that agriculture and the environment collide and connect. She has a background in integrated pest management and a master’s degree in science education from Cornell University. More at http://naturesally.weebly.com/.

See also:
It's Time To Get Rid Of Your Lawn!
Seven Projects Protecting Soils Around The World