Wildfires Are Essential: The Forest Service Embraces A Tribal Tradition

The Karuk were once denied the right to practice an ancient tradition. Now scientific and resource management circles are seeing the merits of controlled burning.

Coyote, the cleverest of the Animal People, traveled to a high mountaintop where Fire was hoarded by three yellow jacket wasps, sisters, who were old and vain. Using his considerable wiles, Coyote flattered the Yellow Jacket Sisters, extolling their beauty.

Distracted by Coyote’s sweet talk, the Sisters left Fire unattended. Coyote saw his chance. He stole Fire, fleeing with it down the mountainside and back to the other Animal People. The Yellow Jacket Sisters followed close on Coyote’s heels.

The Animal People exchanged Fire between one another as the Yellow Jacket Sisters buzzed angrily around them. Fire continued to pass between the Animal People, burning slowly down to a single ember. Frog, the last to hold Fire, held that dying ember in his mouth and dove into the Klamath River, not surfacing until he reached the opposite bank, when …

“He spat Fire into the roots of the willows growing there. This is why we use the willow to make the sticks to make our fire drills,” says Leaf Hillman, rubbing his hands vigorously back and forth in a pantomime of making fire.

Hillman heads the Department of Natural Resources and Environmental Policy for the Karuk, an American Indian tribe of around 5,000 individuals in northwestern California and southwestern Oregon’s Klamath-Siskiyou mountain region. He’s also a tribal member.

“If I had to make up a new story for today,” says Hillman, “I would tell how the federal government has taken fire from the people. Now we have to take it back.”

For as long as they can remember, the Karuk have used controlled burns to manage the threat of wildfires and cultivate traditional plants. They believe that fire balances their ecosystem; in their words, fire “fixes the world.” Yet for roughly a century, these people of fire have been in direct conflict with the U.S. Forest Service, which now has jurisdiction over most of the Karuk’s traditional lands. Whereas the Karuk advocated for the use of fire, the Forest Service vigorously suppressed it and, in the process, the Karuk. But attitudes around fire suppression and the use of fire by Native Americans are quickly changing as new research comes to light.

A body of scientific and historical work now suggests numerous North American tribes used fire. While the precise extent and impact of this burning remain controversial, what is clear is that Native Americans have managed to accumulate a vast storehouse of valuable, evidence-based approaches to managing their lands, and this knowledge is now the subject of a great deal of scholarly investigation. For the Karuk, this ecological knowledge revolves around fire.

“When people ask, What is your focus, what do you do at the department, I say fire. It’s the most important thing that we do,” Hillman says. 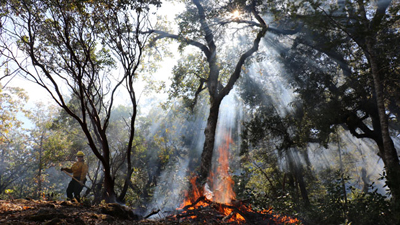 It’s early October in Orleans, California, a time the Karuk traditionally burned. Once the site of a Karuk village, the town of less than 1,000 is now a blip located on a winding highway that shadows the Klamath River as it cuts through steep hillsides of Douglas fir, oak, and madrone. Altered by logging, mining, and fire suppression, the landscape differs significantly from the one the Karuk once occupied. But there is an old, familiar smell in the air, something like a large campfire.

From the riverside to the surrounding hills, men and women, many of them Karuk, are igniting bright orange flames on the landscape, wearing hard hats, flame-retardant green cargo pants, and yellow jackets. (The Karuk consider the jackets’ similarity to the sisters in their fire story as something of an inside joke.)

This marks the third year the Karuk have helped run and organize the community burning program, a joint venture between the tribe and several groups, including a local watershed council and the nonprofit Nature Conservancy, which uses the burn as part of its own national training program in controlled burning. For the Karuk, the program marks a historic turn from years of being labeled as arsonists for lighting the fires that belief says they are required to perform. It’s also a tribute to the fact that controlled or prescribed burning is becoming in vogue among scientific and resource management circles. The Karuk hope their young fire program will be the start of a sustainable, community-based effort leading to a cultural and ecological revival for the tribe.

“It’s been around 100 years since fire suppressions began, and we’re coming around to the understanding that fire is good for communities and the protection of wildlife,” says research ecologist Frank Lake.

A kind of rock star in the scientific study of burning by West Coast tribes, Lake is a member of the Karuk tribe, although he works not for his tribe but for the Forest Service (a positive sign of change, he says). Lake is part of a growing number of researchers taking issue with the long-held assumption that North America was a sparsely populated wilderness when European colonists arrived. Not only are the population numbers of Native Americans likely much higher than previously estimated, according to Lake and other researchers, but tribes—from Appalachia to California—employed fire to transform their environments from inhospitable wilderness into productive working landscapes.

Lake and others’ research on the Karuk and similar California and Pacific Northwest tribes suggests Native Americans used fire to cultivate plants and fungi adapted to regular burning. The list runs from fiber sources, such as beargrass and willow, to foodstuffs, such as berries, mushrooms, and acorns from oak trees that once made up sprawling orchards surrounding tribal villages. What remain of these orchards on Karuk lands are now largely overshadowed by taller and faster-growing Douglas fir, a major source of commercial timber. Tribes also reportedly used burns to clear out forests and create savannah for game animals. There’s even evidence that fire encourages salmon spawning, a notion enshrined in Karuk belief. 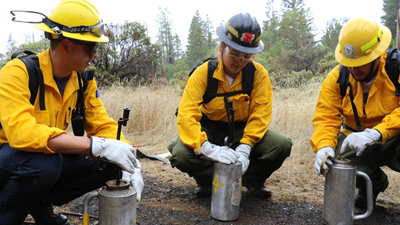 “The country got shocked in 1910 and in many ways doubled down and decided that those who died did not die in vain,” says Stephen Pyne, a leading fire historian.

The loss of life and property was simply unacceptable. Wildfires must be suppressed. The Forest Service led the charge. Federal and state fire agencies fell in line while dissenting voices, including those arguing for prescribed burning that mimicked Native American practices, fell by the wayside, says Pyne.

The policy, which lasted for much of the 20th century, is now considered to be a major blunder. The current scientific and management consensus is this: Putting out fires built up fuel loads in the nation’s forests, ultimately leading to larger, hotter, more destructive, and less manageable wildfires. Humans had interfered with the natural fire regime, the new argument goes, and now it is time to put fire back on the landscape in a prescribed way. But what if that historical regime wasn’t all that natural?

“You often hear about natural fire regimes and that fire played a natural role, but less attention has been given to the ways tribes used fire on the landscape to influence biodiversity,” Lake says.

The Forest Service, it seems, is becoming receptive to this view.

A sign of the times is Merv George Jr., a member of the Hoopa Valley tribe and California’s first American Indian forest supervisor. Last year, George signed an official agreement with the Karuk to start prescribed burning on the Six Rivers National Forest, something that would have been unheard of in the past.

“I’m sort of a social science experiment,” says George. “I came to this job realizing what this landscape needs is all people’s help and concern and experience, whether that comes from science or thousands of years of knowledge. Here on the Six Rivers, we’re a good example of blending that.”

George says he knows of at least two similar collaborations happening between tribes and other national forests. However, these collaborations could remain the exception. That’s because although blanket fire suppression is no longer official policy, prescribed fire remains a contentious practice. The reason: Controlled fires can get out of hand. 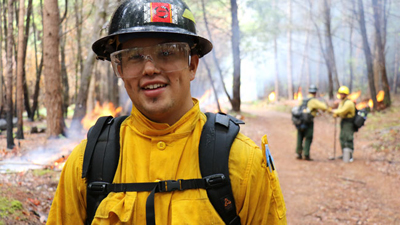 This was the case with the 2000 Cerro Grande fire that started as a National Park Service attempt to burn just 1.4 square miles in northern New Mexico. Winds and dry conditions whipped the flames of this tiny controlled burn into a nearly 75-square-mile conflagration that raged out of control in and around the Los Alamos National Laboratory. It destroyed 280 homes, multiple Lab buildings, and resulted in $1 billion in damages, according to an investigation by the General Accountability Office. Unintended and unfortunate consequences like these, according to Pyne, have made agencies risk-averse to prescribed burning.

The Karuk are keenly aware of just how dangerous fire can be, but they say they need to risk controlled fires now in order to avoid out-of-control fires later, especially as the climate changes.

Over the past quarter century, more than 780 square miles of the Karuk’s lands have burned. As with much of the rest of California and the American West, Karuk territory is experiencing an increase in wildfires. Climate change is now believed to be responsible for much of this growth, accounting for a doubling of the land area burned in Western forests in recent decades. This trend is expected to continue throughout this century as climate change produces warmer, drier conditions—ideal for large destructive wildfires.

Keeping a watchful eye on the impending firestorm is Karuk member and Hillman colleague Bill Tripp. Tripp has just finished helping write a 200-page climate change assessment that covers all 2,000-plus square miles of the Karuk’s traditional territory. The document, a joint effort with a longtime collaborator at the University of Oregon, hopes to parse out how climate change will affect the Karuk’s cultural resources. The short answer is fire. The Karuk are concerned that climate change’s coming mega-fires will burn too hot for even some of the tribe’s fire-adapted plants, leading to an overturning of the local ecosystem that could strike at the heart of many Karuk traditions.

The trick, Tripp says, will be to keep the wildfires in check with controlled burns. In practice this will mean creating protective burn rings around their homes and towns and burning plots according to how often the willow, oaks, or other resources require it. In other words, doing what they’ve always done. A soft-spoken man with something of an aw-shucks demeanor, Tripp is both steadfast and realistic about how long this will take.

“We’re not going to be able to solve this problem overnight. This is going to be a 100- to 200-year process,” he says. “But we have to start. Otherwise, the whole ecosystem around here just doesn’t have a chance.”

Nathan Gilles wrote this article for Why Science Can’t be Silent, the Spring 2017 issue of YES! Magazine. Nathan is a freelance science writer based in Vancouver, Washington. Follow him on Twitter @NathanGilles.