Over the past several months, wildfires have burned a huge portion of Australia’s natural landscape. We’re talking almost 18 million acres of bushland, forest and national parks. This was not your typical annual wildfire. As Dieter Hochuli, an environmental sciences professor at the University of Sydney, told CNN, it should not be seen as such. “The scale of these fires is unprecedented,” said Hochuli. “There are substantial concerns about the capacity of these (ecosystems) to rebound from the fires.”

One of the more emotive examples of this situation is the loss of animal life. In total, ecologists estimate that as many as 1.25 billion animals—including iconic Australian species such as koalas, kangaroos, wallabies and gliders—have been killed or displaced by the fires. In some instances, certain species may have even gone extinct.

Species with smaller populations living in localized environments face the greatest risk of extinction. While species such as koalas and kangaroos were spared this time around, as their populations diminish alongside habitable land, so too do their chances of survival the next time the fires break out. The reason we need to pay particular attention here is that that “next time” may be sooner than we can afford. 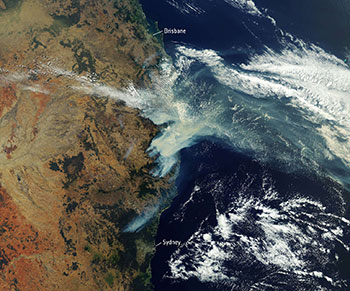 Hot and dry conditions along with strong winds spread multiple bushfires burning across Australia’s east coast on November 12, 2019. Plumes of smoke can be seen drifting east over the Tasman Sea. Hazardous air quality from the smoke haze reached the cities of Sydney and Brisbane. (Copernicus Sentinel-3 / European Space Agency)

The review found that “fire weather seasons have lengthened globally between 1979 and 2013. Fire weather generally involves hot temperatures, low humidity, [and] low rainfall in the preceding days and weeks, and windy conditions.” Furthermore, the studies’ climate models show that this change has come about as a direct result of climate change, as opposed to natural fluctuations.

In 2019, Australia saw its hottest and driest weather on record, a condition that Richard Betts, co-author of the review, warned could become the “new normal.” His analysis concluded that in order to reduce the future risk of fires, it is essential that climate change is kept below 2 degrees Celsius, in accordance with the Paris climate agreement.

In Australia, however, there is still much debate around reducing the risk of wildfires versus confronting climate change head-on. On one hand, reported The Economist, some Australians have suggested the best solution lies in a method known as “hazard reduction.” This practice involves carrying out controlled burns during winter in order to reduce flammable material. But the problem with this approach is that longer fire seasons mean a shorter window period for prevention.

The other side of this debate argues for tackling the underlying causes of this problem. As The Economist notes, the recent Australia wildfires marked a shift in rhetoric around the connection between these events and climate change. Australian Prime Minister Scott Morrison, for instance, has claimed the country is set to “meet and beat” its greenhouse gas emissions reduction goals. In reality, though, this is not the case.

Australia’s carbon emissions are “among the highest in the world,” according to The Economist. Moreover, these levels have in fact been rising since Morrison’s Liberal Party came into power in 2013 and got rid of a carbon tax. Furthermore, at the climate conference in Madrid, Spain, in December 2019, Australia proposed meeting its Paris Agreement commitments by carrying over previous credit earned in the past. This proposal sets a dangerous precedent for other big carbon emitters such as China and exemplifies the ongoing denial around preventing a future fraught with climate-induced destruction. 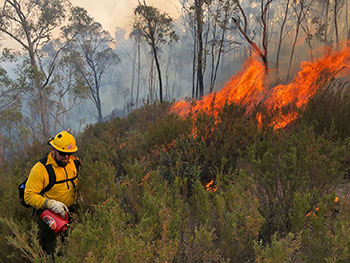 Clay Stephens from the U.S. Bureau of Land Management (Idaho) assists with fighting the Australian bushfires at Tambo Complex near Victoria. (BLM Idaho via Flickr)

Let’s ignore this harsh reality for a moment and imagine a brighter future where countries like Australia actually lower their carbon emissions. The fact remains that wildfires are not going to stop. So, beyond the obvious need for government policies committed to tackling climate change, what else can be done?

One idea proposed by Conservation Magazine is to promote biodiversity. One of the greatest costs of wildfires is the loss of indigenous animals, a factor that may have a knock-on effect of increasing the risk of further fires. This is according to one study published in the journal Animal Conservation.

According to this research, over the past two centuries, Australia has lost 29 of its 315 terrestrial mammals. This means certain parts of local ecosystems have been lost, which in certain areas could be increasing the risk of fires spreading. How? Here’s the theory.

Leaf litter is one of the most prominent sources of flammable material when it comes to wildfires. In the past, much of this pesky detritus has been cleaned up by “fossorial species,” like small marsupials, that burrow and turn over the dead leaves with soil, which ultimately helps to break it down. With these populations diminishing, the amount of leaf litter accumulates—and so does the material for starting fires.

To test this theory, Matt Hayward, a conservation ecologist at Bangor University in Australia and the Australian Wildlife Conservancy, set up an experiment, as explained in Anthropocene Magazine. Together with his colleagues, Hayward reintroduced fossorial species to certain, fenced-off areas. The team went on to compare the accumulation of leaf litter within these enclosed areas versus outside. They discovered that the little critters had helped reduce litter by 24 percent, which a mathematical model calculated could drastically reduce both the intensity and speed in fires due to the “reduction in fuel.”

This approach to tackling wildfires offers a number of benefits. For one, it’s a natural, sustainable method that doesn’t necessarily require huge costs. It also facilitates decomposition, which leads to less carbon being released into the atmosphere. Although biodiversity alone is not nearly enough to single-handedly combat wildfires, it should form a crucial part of any holistic prevention plan for the future.

Yet Derek E. Lee, an associate research professor of biology at Pennsylvania State University, believes that in certain instances, fires can even assist in promoting biodiversity.

“In the fire-adapted forests of North America, there are many studies that show how biodiversity is increased by fire diversity, and the big high-severity patches in burned forests often see a cascade of superabundance following fires,” Lee told the Independent Media Institute. This process begins with the arrival of certain insects which lay eggs “where their larva can eat the still fresh layer of tree tissue under the bark.” This, together with a growth in nutritious shrubs, leads to the arrival of nesting birds, bats, and small mammals like mice, gophers and wood rats, which in turn attracts spotted owls and other raptors, bobcats, coyotes and black bears.

“These forest systems have been adapting to cycles of wet and dry epochs for millions of years, so they know how to take advantage of fires when they happen. The problem is that humans degrade and alter forests that were perfectly adapted, and sometimes the remaining forests are too small and fragmented to do what they evolved to do. The solution to our global climate and biodiversity crises is to preserve our existing forests, regrow damaged or lost forests wherever possible, and let natural processes continue,” said Lee. 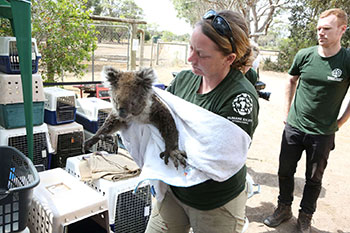 Another strategy, highlighted in a recent report by Australia’s ABC news, involves drawing on Indigenous knowledge. In recent years, state fire agencies, as well as local property owners and land councils, have begun working more with traditional fire practitioners on a small scale to conduct preventive burns. These practices involve using small controlled flames on a case-by-case basis. Oliver Costello, a member of Firesticks Alliance Indigenous Corporation who assists with facilitating these burns, explained to ABC how the process takes place.

Taking into account habitat, vegetation, soil type and moisture levels, Costello’s group determines how they conduct their burns. “We might see vegetation we know shouldn’t be there, and we’ll go hotter in that one spot,” he said. The effect is preventive burns that reduce fire risk while also encouraging the growth of local flora, thus protecting native animal habitats. This approach is in line with promoting biodiversity.

As opposed to hazard reduction burns that focus on reducing fuel for fires, the Indigenous method is not a one-size-fits-all approach. By tailoring each burn to that specific area, general fire risk can be brought down to a greater degree by maintaining the integrity of the habitat. However, in order for this to become sustainable, said Costello, cultural burning needs to be factored into mainstream fire management in the future.

“Most of the Aboriginal communities we work with do not have the resources to support their people to manage their land full-time, so that’s a big problem,” Costello told ABC. He emphasizes a need for training programs and greater investment in building this sort of infrastructure.

Undoubtedly, these sustainable approaches will help reduce future fire risk. The key to realizing these and more fundamental solutions, however, remains in the hands of politicians—who remain, at least in Australia’s case, mostly ineffective. As Catherine Brahic, The Economist’s environment editor, said in a recent podcast, “It’s not necessarily about preventing fires. As I said, in many places fire is just part of the natural ecosystem. Whether or not people need to be moved out of certain high-risk areas is, as I say, a live debate; it’s a political debate … to some extent it’s possible that people might need to just learn to live with fire risk.”

The fires aren’t about to stop, but how we confront them can change. Politicians can no longer address natural disasters without discussing the climate crisis. Time is running out, and we cannot afford to waste any more of it.

Robin Scher is a writer based in South Africa. He is a graduate of the Cultural Reporting and Criticism program at New York University. Follow him on Twitter @RobScherHimself.

This article first appeared on Truthout and was produced in partnership with Earth | Food | Life, a project of the Independent Media Institute.