There are 60 stations licensed to tribes or tribal entities in the United States. They stand to lose a lot if Trump cuts federal funding.

Of the nearly 3,000 people living in the Hoopa Valley, approximately three-fourths are Native American. And the local radio station KIDE-FM caters to them, offering listeners live broadcasts of the Hoopa tribe’s general meetings; a local, award-winning, weekly show called “Health Matters”; and an array of national programming, including NPR newscasts and Native American public media shows.

Joseph R. Orozco, station manager of KIDE for the past 28 years, said the station, with a $200,000 annual budget, relies on funding from the Corporation for Public Broadcasting, which provides grants to tribal stations like his.

“Every year someone is threatening to reduce the funding or cut it out completely,” says Orozco. “And this time it’s really scary because they seem to be working on it.”

Since President Trump took office, his administration has kept the press on their toes. As a result, social media, television, and radio have been saturated with breaking news on the latest “alternative facts,” anti-press-freedom rhetoric, and flood of executive orders affecting immigration to the Keystone XL and Dakota Access pipelines. Now, according to The Hill, Trump may be setting his sights on funding cuts to organizations such as the CPB and the National Endowment for the Arts.

Should cuts take effect, tribal stations stand to lose a lot, as they rely heavily on CPB grant funding. There are 60 stations licensed to tribes or tribal entities in the United States, including commercial and public radio stations. Of these 60 stations, 35 are supported by the CPB’s Community Service Grant award, which matches each station’s yearly fiscal budget then doubles it. Of the government’s $445 million appropriation for the CPB in the 2017 fiscal year, about $7 million of CSG and additional grant support goes to tribal stations across the United States, according to the CPB.

“Our support of Native stations is part of a larger CPB mission,” says Letitia King, the organization’s senior vice president for corporate communications. That mission, she says, is “to provide public broadcasting to all Americans for free, commercial-free, and we have a special benefit for Native stations to ensure that they’re able to serve their communities.”

Given stations’ growing concerns about potential funding cuts, King urges tribal stations to continue to provide services to their communities. “That service is what is persuasive for the bipartisan support for public media,” she said, adding that the CPB has had a long track record of that support.

Loris A. Taylor, the president and CEO of Native Public Media, has kept a close eye on the developments. Funded through a CPB grant of its own, NPM provides aid to tribal governments and entities so that they can carry broadcast licenses; it is the organization’s mission to improve broadband access across Indian Country through media access and ownership.

This isn’t the first time the CPB has stood on shaky ground. Past threats to cut the organization’s funding ultimately fizzled, such as a highly publicized proposal under former President George W. Bush. But given the Trump administration’s apparent interest in privatizing public broadcasting, Taylor and others in public media worry about the future.

The worst-case scenario, according to Taylor, would be that small stations such as KIDE shut down without the CPB funding.

“I am hoping that that will not be the case,” she says. “We’re trying to do everything that we can in terms of alerting our small stations to get prepared to buffer up their resources, to look at other streams of revenue if they can.” 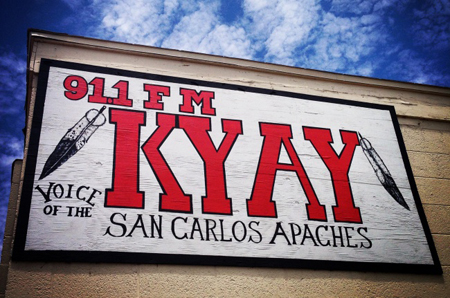 Before station fundraising and CSG grants kick into KIDE’s annual budget, the Hoopa Valley tribe contributes a little more than $94,000, Orozco says. Then the station raises another $6,000 from fundraising in order to reach the minimum $100,000 to be eligible for the CPB’s Community Service Grant. Under the station’s shoestring budget, Orozco has set in place cost-saving innovations.

KIDE was one of the first tribal radio stations in California to have a hybridized solar power system, which has allowed the station to cut back on electricity costs by 60 percent. And recently the station has begun to stream its broadcast service through its website. Still, KIDE requires funding for basic operations.

“We rely on the CPB funds to pay the electricity and telephone, plus all of our national programming that we get off the satellites,” says Orozco. “Our streaming, our website. Everything.”

Orozco has plans for the future of KIDE and continues to apply for additional grants to improve community engagement and participation with all of Hoopa Valley. He’s working on bringing back a call-in show, for instance, but that’s been held up by a long list of equipment repairs.

Taylor said she’s found over the years that communities place a lot of trust in and reliance on tribal stations, as the isolation of rural Indian Country can be compounded by a landscape where broadband access is limited.

This is more acutely felt in Alaska, says Jaclyn Sallee, president and CEO of Koahnic Broadcast Corporation and KNBA in Anchorage. Twelve of the 60 tribal stations in the United States are located in Alaska. Koahnic produces Native programming, which includes “National Native News,” “Native American Calling,” and “Earth Songs.” They distribute programming through Native Voice One to more than 350 radio stations across the country. Sallee says Koahnic and KNBA receive three separate grants from the CPB.

According to Sallee, state funding to public radio stations has been cut by 50 percent over the past two years.

“The local stations are a lifeline for listeners,” especially in remote regions where locals may rely on stations as their sole source for national, state, and local news or emergency information, Sallee says.

This is the case for KZPA-AM, Gwandak Public Broadcasting, Inc., which serves Fort Yukon, Alaska. Though the community’s population is estimated to be around 600, thousands have come to rely on the station’s programming because it’s one of few stations for miles around, says Vicky Thomas, KZPA’s office manager.

“We do a lot of search-and-rescue stuff that’s vital to our community, like missing people,” says Thomas. “During the springtime, we do flood watch, because our water has been very high, coming in at different locations.”

Thomas hopes the station’s budget will hold steady with CPB funding; she doesn’t believe KZPA could survive without it.

“Funding has been diminishing throughout the years,” she says. “We’re doing a lot of planning in case something like that happens.”

Back in the Lower 48, Orozco likens the importance of funding for tribal stations to an oft-forgotten federal trust responsibility between tribes and the United States. In his eyes, the United States has not done enough to reestablish tribal communication systems through stations like his.

“Native media is a sovereign right that was never returned to us,” says Orozco. “It is the fourth estate. The people need to have that balance. That’s what media does, be it a newspaper or radio."

Christine Trudeau wrote this article for YES! Magazine. Christine is a journalist and citizen of the Prairie Band Potawatomi Nation of Mayetta, Kansas. Her work has appeared on NPR, National Native News, and in Native Peoples Magazine.

During the early morning hours Venus makes an empowering trine to Pluto. By early afternoon the Goddess of Love and Beauty is conjunct retrograde Mercury. Existing attachments grow closer. An enchanting reunion could be under...