Smart meters are not an environmental solution.

A meeting is taking place in early December in Washington, DC to strategize how to use the Clean Air Act EPA 111 to justify investment in the wireless smart utility grid.

Massachusetts is well represented, including a former high-ranking MA energy official, a National Grid executive, and a former Clark University professor who was an industry spokesperson for the $48M Worcester smart meter pilot program. To the uninformed, participation by MA smart grid “experts” might be a source of pride and optimism. It isn’t.

Using the Clean Air Act to justify wireless smart meters as a “solution” to climate change is akin to giving industrial-scale drain cleaner to an infant for indigestion.

The World Health Organization’s International Agency for Research on Cancer declared radio frequency exposure a possible human carcinogen in 2011, but has only conducted an epidemiology review of data on adults. Like thalidomide, FCC guidelines have never been tested or monitored for adverse impacts on pregnant women, infants, and children. Nor have they been evaluated for the medically vulnerable, the elderly, pollinator honeybees, or life on planet earth.

Science-informed policy in many other nations is not in agreement with the Federal Communications Commission, which is a pro-industry trade organization, and not a health regulatory body.  Radio frequency guidelines in the US, which are based on the theory that tissue heating is the only cause of harm for these frequencies, were developed for warfare, not for communication uses that we rely on today. These guidelines ignore the biological impacts these frequencies have.

Additionally, outdated wireless regulations allow industry to measure one smart meter, antenna, or wireless device in isolation against FCC guidelines. This is the equivalent of going into the medicine cabinet and giving all of the drugs, all at the same time at adult dosages to a child, with no recognition of individual dosage tolerance, side effects, frequency interactions, or cumulative impacts.

In 2014 the Department of Public Utilities (DPU) mandated that smart meters and time-of-use-pricing for MA customers would be the cornerstone to grid modernization, despite the fact that smart meters are a continuous source of additional radio frequencies pulsing throughout your home 24/7.

An independent, transparent, public investigation is warranted before the $7B bill for this program is foisted on ratepayers. How is it that customers are financing and being used as test subjects in R & D (research and development) for foreign-owned for-profit utilities, with no health or environmental monitoring? MA ratepayers paid for the pilot; they deserve to see the results.

Massachusetts has the intellectual and moral resources to examine the $48M Worcester Pilot Program, the smart meter issue, the actions of the Department of Public Utilities concerning the mandate, as well as the assumptions driving the New England Governors’ plans concerning the region’s energy future, before moving forward.

Government should be transparent and the private lives of private citizens should be private, and not the other way around. Smart meters provide an intimate profile of private lives. Big Data is only as ethical as the means by which it is collected. 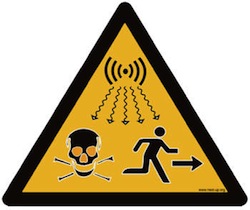 The Telecommunications Act of 1996, which prohibited communities from blocking the installation of telecommunications infrastructure due to environmental concerns, is an immoral law. The unexamined collaborations between utilities and telecoms are already having disastrous effects on a portion of US residents.

If another nation were to deploy invisible technology in homes and businesses of US citizens without informed consent that alters DNA, breaches the blood-brain barrier, overrides cellular signaling, and increases long- term risk for cancer, it would be considered an act of war. It is.

From autism to ADD-AHDH to Alzheimer’s to cancer, American's brain is under siege. The laws of the market only work when industries are held accountable for damages, rather than shielded from liability. Let’s not replace the chemical carnage of the 20th century with radio frequency carnage in the 21st century. We can do better. Let this be our legacy, yours and ours.  Now.

Patricia Burke is the MA contact for Citizens for Safe Technology, opposing the installation of wireless smart utility meters, the use of industrial-scale wifi in schools, and the unregulated placement of cell towers and antennas in sensitive areas, and calling for biologically-based RF exposure limits.  She also works with HaltMAsmartmeters.org, Stop Smart Meters Massachusetts, NoMassSmartMeters, and Worcester Opts Out.