The number 007 is normally connected with the thought of intelligence work and spies. Here at 007b.com the “B” doesn’t stand for “Bond” but for Breasts. Our goal is to get people to use their intelligence, so as not to fall prey to the typical “007 James Bond” type of thinking, which is so prevalent in many countries of our world today. A 47 year old woman who suffered from childhood sexual abuse and debilitating chronic illness in adulthood commented, “If you live long enough, you will be sick or something will be wrong with you. You’ll lose a job. You’ll have a serious accident. You’ll get sick. You’ll gain weight. How do we deal with this in a culture that worships perfection and youth?”

How Bras Are Linked To Breast Cancer

Many allopathic medicine advocates say that bras causing breast cancer is just a myth. It is true that bras do not cause breast cancer per se, but they are linked to its formation since they can prevent your body from excreting dangerous cancer-causing chemicals. The main reason why bras are bad for breast health is because they restrict the lymph flow in your breasts. There are numerous lymph pathways and lymph nodes in the armpits, under the breasts, and in between the breasts. Normally the lymph fluid washes out waste materials and other toxins away from the breasts, but bras (and especially push-up bras) inhibit this action, so toxins can start to accumulate in the breast, and that can help cancer to develop. In other words, bras inhibit the way our bodies normally cleanse themselves and get rid of cancer cells and toxins like PCBs, DDT, dioxin, benzene and other carcinogenic chemicals that cling to the body’s fatty tissues like breast. In fact, if you find a lump in your breast, it may very well be filled with lymph fluid that was not able to move away from the breast tissue.

Bra wearing may also be connected to cancer in other ways. Wearing bras slightly increases the temperature of the breast tissue, and women who wear bras have higher levels of the hormone prolactin. Both of these may influence breast cancer formation. The first comprehensive study on this subject was done by medical researcher Sydney Singer, after his wife Soma Grismaijer discovered a lump on her breast. She got rid of hers in two months by quitting bra wearing, doing regular breast massage and exercise, drinking only purified water and taking some herbs and supplemental vitamins and minerals.

Singers noticed that the Maoris of New Zealand integrated into white culture have the same rate of breast cancer, while the marginalized aboriginals of Australia have practically no breast cancer. The same was true for “Westernized” Japanese, Fijians and other bra-converted cultures. In the early 1990s Singers studied 4,500 women in 5 cities across the U.S. about their habits in purchasing and wearing bras. Though his study did not take into account other lifestyle factors, the results are too striking to be denied:

So the difference between 24 hour wearing and not at all was 125-fold! The lymphatic system in the breast only develops fully during pregnancy and breastfeeding, so women who wear bras everyday and postpone having children, and those who do not breastfeed, could be at higher risk of breast cancer.

Did you know that in Sub-Saharan Africa, the death rate from breast cancer is 3 per 100,000, compared to 20 per 100,000 in industrialized countries? Guess which part of the world wears bras? “Breasts don’t need support to be held up in the air. That’s not what thousands of years of evolution did to the female body,” says Sidney Ross Singer, medical anthropologist in Why Bras Cause Breast Cancer.

The lymphatic system consists of tiny, thin-walled vessels that drain from the breast tissue, removing toxins, cell debris, cancer cells and other products. Unlike arteries and veins, these vessels have no internal pressure and are therefore easily compressed. Bras subject breasts to pressure, closing off the lymphatic pathway from the breast to the nodes. This causes fluid build-up, swelling, tenderness and cyst formation. A bra-constricted breast cannot adequately flush out toxins, resulting in toxin accumulation in the breast that increases the chance of breast cancer.

Lymphatic circulation in many tissues is highly dependent on movement. Women evolved under conditions where there was breast movement with every step they took when they walked or ran. Every subtle bounce of the breast while moving, walking, running, etc., gently massages the breast and increases lymphatic flow and thus cleans the breast of toxins and wastes that arise from cellular metabolism.

When you sit for a long time on an airplane flight, your feet and ankles can swell because lymphatic circulation goes to near zero. Wearing a bra, especially a constricting one with underwires, and especially to bed, prevents normal lymphatic flow and would likely lead to anoxia (lower than normal oxygen content), which has been related to fibrosis, which has been linked to increased cancer risk.

This web site isn’t about women’s liberation. It’s about liberating women.
We’re not anti-bra. We’re pro-breast.
We believe healthy breasts can support themselves, free of wires and hardware.
We believe there are no known health benefits from wearing bras — but there are disturbing parallels between wearing bras and the incidence of fibrocystic disease and breast cancer.

— From the website of Dr. Elizabeth Vaughan, MD, bra-free, board certified physician in Greensboro, NC 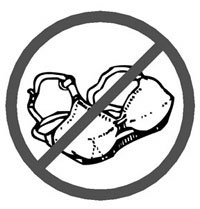 In Western society, we’ve settled on the bra as a way to shield irrationally-sensitive observers from nipple phobia. That phobia is theirs, not yours. If you trash your bra, you may have to find another way to hide your God-given assets, so as not to offend the easily offended.

Many women feel more comfortable wearing bras in public because they either minimize or accentuate their breasts with bras. Worst case, if you’re in a situation where only a bra will do, then wear one if that makes you comfortable. But, you make that decision. Don’t let someone else make it for you. And, the very minute the event is over, get that bra off. Bras are not good for breasts.

“Healthy breasts don’t need support. Noses don’t, either. Or ears. Or arms. If you put your left arm in a sling for six weeks, on the first morning of the seventh week, you’d need ‘support’ for that arm, because it would have lost all muscle tone.”

“In exploring the possibility that bras relate to breast cancer, we are about where we were in the 1950s with respect to cigarettes causing lung cancer. Doctors began to see men present with lung cancer who had a long history of smoking. It took 20-30 years to “prove” the connection and 40 years to prove causation. Many physicians — perhaps most physicians — and the American Cancer Society assert that no link has been positively demonstrated between bras and breast cancer. But, then, we waited 50 years for someone to demonstrate a positive link between cigarettes and lung cancer.”