Hello Family and Friends, Finally, I have slowed down enough to send you an update and a few photos of my adventures in Wiltshire.

So far, in England alone, there have been about 28 crop formations since April, about 16 of them in the area where I am staying. I have been in about 9 of them, and while all are beautiful, some are more amazing then others. One appeared three days ago, then two days ago another section was added onto, which is not uncommon. The peak period is July/early August as the wheat and barely fields are ripening.

The farmers, understandably, really do not like the formations in their fields, as they lose some revenue, but now many realize they have no control and put out a donation box, and usually make up at least some of the money. One farmer brought his baby boy into the circle two days ago, and was marveling at it all. Last week I was in a formation not far from Stonehenge, and the two farmers arrived and were furious. They thought we had made it , which made us all laugh, which pissed them off even more. If they had had a gun, I think they might us shot us. Need-less-to-say, we left quickly.

Of course, there is a lot of idea about who and how and why they are made, but when you see some of the larger, more complicated ones, it really is hard to imagine humans with boards in the dark within about 4 or 5 hours, pulling off such perfect precision. In any case, they are lovely art.

Finding them is a bit of a treasure hunt. There are dozens of people who spend part of the summer pretty much doing just that. A few people fly over Wilshire in the morning, every morning, to see if they can spot them. Then they call into a crop circle central — the Silent Circle Cafe — and report it and approximate location by hills, town, landmark, etc. Then anyone who is interested heads out and tries to find it. Sometimes it is very difiicult because of the hills, hedgerows that you cannot see over, etc.

Last week I was lucky to be the first to find one. After about two hours of searching, we were about to give up and I had a hunch it was just over the other side of a low hill that we could not see from our hill. We drove, and the others past on ahead, and my voice said to turn right onto the dirt road into the field….And there to right, I could barely make out a disturbance in the field. We I stood on the car I could see it….And it turned out to have a perfect spiral in the middle, very similar to much of my Swirlism artwork. It was odd, how personal it all felt, as several people told me that they thought it was "my" circle.

And I have always dreamed of fan fancing in the center of a crop formation, so finally had my chance….while being filmed by some camera crew.

I have attached a few pics, one of the crop circle from this morning, one of me in the spiral, and one a close up of how their centers are often tufted.

The other two pics are these strange orbs of light that appear often in photos taken in the area. Though it happens to be raining and you might think the blobs are rain or moisture, they are not. If it was on the lens of the camera then all the pics would have them. And why are some moving? If you download the photo and zoom into one of the orbs, you will see that they have a sort of inner, cellular-like structure. No one knows what these are, but they are quite common. I have met so many amazing, strange, and fascinating people; it is quite a circus…..

That's it for now, love and peace Bill. 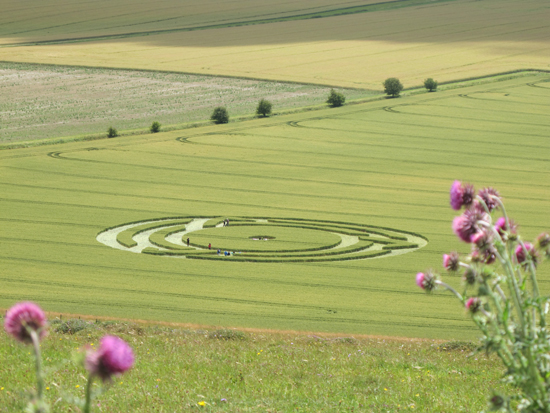 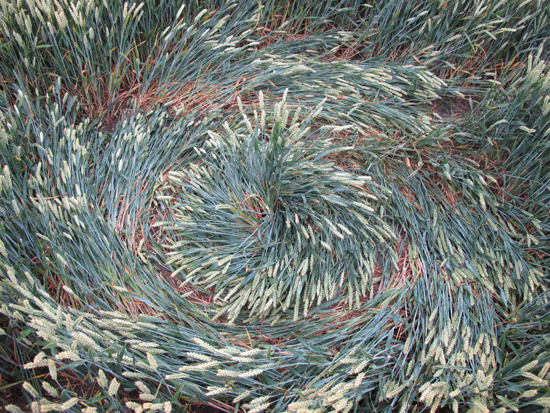 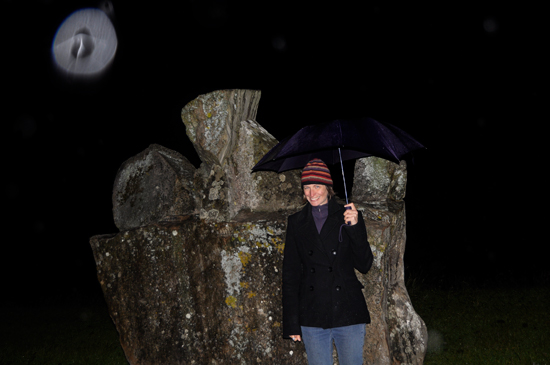 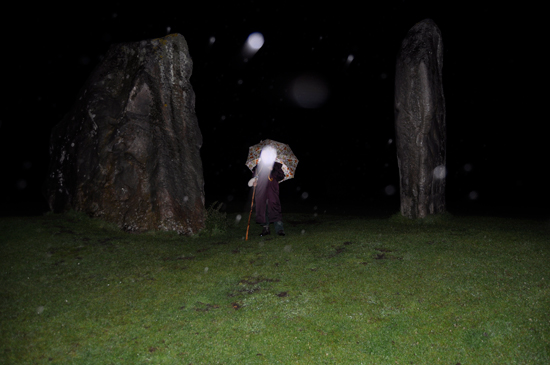