Fermented Foods Are Good For You—Here's Why

Not everyone loves every flavor of fermentation, but there's no denying the transformative power of microscopic bacteria and fungi.

The following is an excerpt from Wild Fermentation: The Flavor, Nutrition, and Craft of Live-Culture Foods, 2nd Edition by Sandor Ellix Katz (Chelsea Green Publishing, 2016):

Fermented foods and drinks are quite literally alive with flavor and nutrition. Their flavors tend to be strong and pronounced. Think of stinky aged cheeses, tangy sauerkraut, rich earthy miso, smooth sublime wines. Though not everyone loves every flavor of fermentation, humans have always appreciated the unique, compelling flavors resulting from the transformative power of microscopic bacteria and fungi.

One great practical benefit of fermentation is that it can preserve food. Fermentation organisms produce alcohol, lactic acid, and acetic acid, all “bio-preservatives” that retain nutrients while preventing spoilage and the growth of pathogenic organisms. Vegetables, fruits, milk, fish, and meat are highly perishable, and our ancestors used whatever techniques they could discover to store foods from periods of plenty for later consumption. From the tropics to the Arctic, fermentation has been used to preserve food resources.

Captain James Cook, the 18th-century English explorer who extended the far reaches of the British Empire, was recognized by the Royal Society for conquering scurvy (vitamin C deficiency) among his crews by sailing with large quantities of sauerkraut. Among the many lands Cook “discovered” and delivered into the Crown’s realm were the Hawaiian Islands (where Cook later lost his life). I find it an interesting parallel that the Polynesian people who crossed the Pacific Ocean and populated Hawai’i more than 1,000 years before Captain Cook also sustained themselves through the long voyage with fermented food, in this case poi, a thick starchy taro root porridge still popular in Hawaii and throughout the South Pacific.

Fermentation doesn’t only preserve nutrients, but generally breaks them down into more easily accessible forms. Soybeans are a good example. This extraordinarily protein-rich food is largely indigestible (and some would say toxic) without fermentation. Fermentation breaks down the soybeans’ dense complex protein into readily digestible amino acids (and simultaneously breaks down the potential toxins), giving us traditional fermented soy foods such as soy sauce, miso, and tempeh.

Milk, too, is difficult for many people to digest. Lactic acid bacteria transform lactose, the milk sugar that so many humans cannot tolerate, into easier-to-digest lactic acid. Likewise, gluten that has undergone bacterial fermentation (as opposed to the pure yeast fermentation most commonly used in contemporary breads) is broken down and easier to digest than unfermented gluten. According to the United Nations Food and Agriculture Organization, which actively promotes fermentation as a critical source of nutrients worldwide, fermentation improves the bioavailability of minerals present in food. Bill Mollison, author of The Permaculture Book of Ferment and Human Nutrition, calls the action of fermenting foods “a form of pre-digestion.”

This pre-digestion action of fermentation also breaks down certain toxic compounds found in foods into benign forms, as mentioned in the case of soybeans. Another vivid illustration of this is cassava (also known as yuca or manioc), the tuber native to the tropical Americas that has also become a staple food in equatorial Africa and Asia. Cassava grown in certain soils contains high levels of cyanide and is poisonous without removal of the toxin. One common method of doing this is a simple soaking fermentation—peel and coarsely chop the tubers and submerge them in water for about five days—which breaks down the cyanide and renders the cassava safe and nutritious.

Not all food toxins are as dramatic as cyanide. Grains and legumes contain a compound called phytic acid, which binds with zinc, calcium, iron, magnesium, and other minerals, blocking their absorption and potentially leading to mineral deficiencies. Fermenting grains by soaking them before cooking breaks down phytic acid, rendering the grain far more nutritious. Nitrites, prussic acid, oxalic acid, nitrosamines, and glucosides are some other potentially toxic compounds found in foods that can be reduced or eliminated by fermentation.

Fermentation also creates new nutrients. As they go through their life cycles, microbial cultures create B vitamins, including folic acid, riboflavin, niacin, thiamin, and biotin. (Ferments have often been credited with creating vitamin B12, otherwise absent from plant-source foods; however, some argue that what had been identified as B12 in fermented soy and vegetables are actually inactive “analogues” known as pseudovitamin B12.)

Some ferments have been shown to function as antioxidants, scavenging cancer precursors known as free radicals from the cells of your body. Lactic acid bacteria create omega-3 fatty acids, essential for cell membrane and immune system function. The fermentation of vegetables produces isothiocyanates and indole-3-carbinol, both regarded as anticarcinogenic. A marketer of “cultured whole food supplements” boasts that “the culturing process generates copious amounts of naturally occurring ingredients like superoxide dismutase, GTF chromium, detoxifying compounds like glutathione, phospholipids, digestive enzymes, and beta 1,3 glucans.” Frankly, nutritional factoids like this make my eyes glaze over. You don’t really need molecular analysis to tell you what foods are healthy. Trust your instincts, your taste buds, and how it makes you feel. The data adds up to this: Fermentation makes food more nutritious.

Perhaps the most profound benefit of eating fermented foods is the bacteria themselves, which are probiotic, meaning they can be beneficial to us. Many different fermented foods are embodiments of dense and biodiverse microbial communities, which interact with our microbiome in ways we are just beginning to recognize. This interaction can improve digestion, immune function, mental health, and many other aspects of our well-being.

Not all fermented foods, however, are still alive when you eat them. Certain foods, by their nature, cannot contain live cultures. Breads, for instance, must be baked, thereby killing the organisms present in them. However, many fermented foods can be consumed live, and alive is the most nutritious way to eat them. 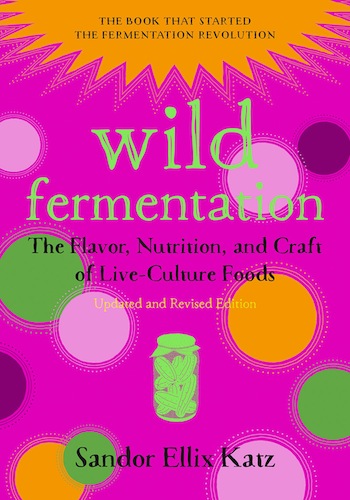 Read labels and be aware: Many commercially available fermented foods are pasteurized or otherwise heat-treated, which extends shelf life but kills microorganisms. Ferments that are still alive generally include in the label words to the effect that they “contain live cultures.” If you want live-culture fermented foods in our world of pre-packaged mass-produced food commodities, you have to seek them out or make them yourself.

By promoting digestive health, live fermented foods can help control digestive disease processes such as diarrhea and dysentery. Live-culture foods have been shown to improve infant survival rates. A study conducted in Tanzania compared mortality rates between infants fed different “weaning gruels,” some fermented, some not. The infants eating fermented gruels had half as many “diarrhea episodes” as the infants fed non-fermented gruels. Lactic acid fermentation inhibits the growth of diarrhea-related bacteria. Another study, reported in the journal Nutrition, concludes that thriving microbiota prevent disease because lactic acid bacteria “competes with … potential pathogens for receptor sites at the mucosal cell surfaces” of the intestines and proposes a treatment strategy of “ecoimmunonutrition.”

As 18-letter words go, I like the word ecoimmunonutrition. It recognizes that an organism’s immune function occurs in the context of an ecology, an ecosystem of different microbial cultures, and that it is possible to build and develop that cultural ecology in oneself through diet. Eating bacteria-rich foods is one way to do this; eating lots of plant fibers (prebiotics) is another. A huge body of research reaffirms the fact that bacteria play an important role in protecting us, as organisms among organisms, from disease.

Sandor Ellix Katz is the author of The Revolution Will Not Be Microwaved (Chelsea Green, 2006) and Wild Fermentation: The Flavor, Nutrition, and Craft of Live-Culture Foods (Chelsea Green, 2003; revised 2016). He travels widely teaching people about food preservation and alternatives ways to get nourishing food. A native of New York City, Sandor lives in Tennessee.