No microbe in the history of the Earth has ever evolved to break down plastic. At least none that we know of. Until we discover an army of plastic-eating microbes to combat the increasing pollution spreading across our oceans, we must take more proactive measures in resolving our love for the most controversial polymer. France is leading the charge and other nations should follow suit as they embark on another big step towards being more environmentally conscious by implementing a new law that will ban plastic cutlery, plates and cups.

The measure was part of the Energy Transition For Green Growth bill that was passed in 2015 and went into effect last month. But producers of disposal plates, cups and cutlery will have until 2020 to make sure their products are made with biologically sourced materials and can be composted.

A December 2014 study derived from six years of research by the 5 Gyres Institute estimated that 5.25 trillion plastic particles weighing some 269,000 tons are floating on the surface of the sea.

Although there are many things people can do to at least help prevent plastic pollution from increasing, there is little to no community action across the world.

Studies have demonstrated plastics' tendency to sorb (take up) persistent, bioaccumulative, and toxic substances, which are present in trace quantities in almost all water bodies. The constituents of plastics, as well as the chemicals and metals they sorb, can travel into the bodies of marine organisms upon consumption, where they may concentrate and climb the food chain, ultimately into humans. This topic has attracted interest and funding from the U.S. Environmental Protection Agency (EPA), the National Oceanic and Atmospheric Administration (NOAA), and the National Academy of Sciences (NAS), as well as researchers, nonprofit groups, and institutions around the world.

The ban was initially proposed by the Europe Ecologie-Greens Party to help cut the energy used in making plastic in addition to the waste it creates. While the move is sure to please environmentalists, opponents argue that product bans hurt consumers.

Some reports estimate that there has been a 90 percent increase in the density of litter over the past decade. More than a third of the garbage found usually consists of fragments of melted plastic, food wrappers, bottle lids and cotton buds. 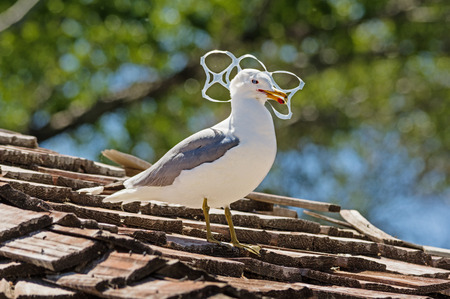 There are now 46,000 pieces of plastic per square kilometre of the world's oceans, killing a million seabirds and 100,000 marine mammals each year. Worse still, there seems to be nothing we can do to clean it up, except ban it to prevent the situation from getting worse.

Because they are so lightweight, plastic cups and cutlery can travel long distances by wind and water. They litter our landscapes, get caught in fences and trees, float around in waterways, and can eventually make their way into the world’s oceans.

Environmental groups continue to push for more plastic bans. "As U.S. natural gas production has surged and prices have fallen, the plastics industry is looking to ramp up domestic production," reports the Earth Policy Institute.

He also argued that there is no proof the ban would be beneficial to the environment adding that it "will be understood by consumers to mean that it is OK to leave this packaging behind in the countryside after use because it's easily bio-degradable in nature. That's nonsense! It may even make the litter problem worse."

Back in 2007, San Francisco became the first U.S. municipality to ban plastic shopping bags. In intervening years upwards of 132 other cities and counties in 18 states and the District of Columbia instituted similar measures. Of course, Americans are late to the party when it comes to banning plastic bags: The European Union, China, India and dozens of other nations already have plastic bag bans or taxes in place.

Exposures to plastic debris have been clearly documented for marine organisms at all trophic levels (i.e., positions within the food chain), says Bradley Clarke, a lecturer at RMIT University in Melbourne, Australia. "What remains to be determined is whether this exposure increases the body burden of … marine organisms in the natural environment and if it does, by what magnitude," Clarke says.

Supporters of the ban wanted it to be introduced earlier, possibly as soon as 2017. But Segolene Royal, the French environment minister, had initially considered it an "anti-social" provision, on the grounds that low-income families relied on plastic utensils and plates.

We do know that plastic has become nearly ubiquitous on the planet. It has washed up on the most remote beaches, amassed in distant gyres, and been discovered in the bodies of dead organisms from fish to birds to whales.

Numerous efforts have sought to quantify the amount of plastics floating on or present throughout the ocean environment, and they've arrived at vastly different numbers.

Plastic cutlery has been around for years, widely considered the only choice for cheap, disposable cutlery. Knowing the threat plastic poses to our environment and health, Narayana Peesapathy created a tasty and nutritious alternative: edible cutlery. Made with flours of jowar (sorghum) blended with rice and wheat, the spoons contain no chemicals, preservatives, fat, emulsifiers, artificial colors, or milk products. They're 100 percent natural, biodegradable, and come in a variety of sweet and savory flavors.

See also:
Should You Be Concerned About Plastic And Other Human Debris In Your Seafood?
Open-Source, DIY Machine Recycles Household Plastic Into New Products