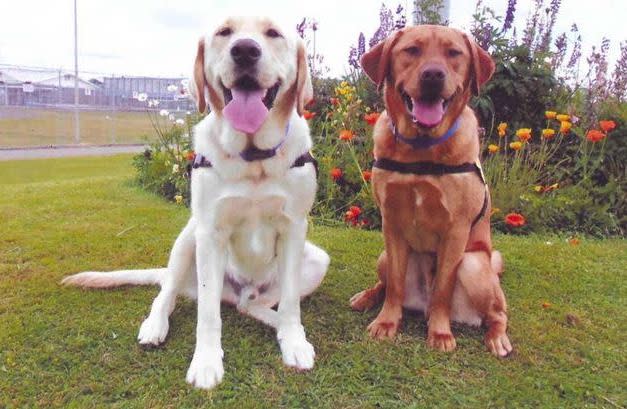 Elliot, left, and Evan, two of the dogs living and being trained at the Washington Correctional Complex. Courtesy of Chris Blackwell

I rubbed the dog’s soft neck. He pushed his head into me as his silk-like fur slid through my fingers. This was nothing new for Evan ― he gets pets and scratches all the time. But I hadn’t touched a dog in 19 years. Petting Evan made me emotional. There is something special about sharing space with a living thing that doesn’t know your past ― a space where judgment is nonexistent. Evan and another dog, Elliot, are part of Brigadoon Service Dogs at the Washington Correctional Complex, where I’m living. The program partners incarcerated individuals with dogs so the dog can be trained to help children and adults with physical and/or developmental disabilities.

Being around birds make people feel ‘chirpy’ boosting mental well-being, according to a new study. Seeing or hearing birds provides a lift to mental health—with the boost lasting for up to eight hours, according to the findings. Researchers used a phone app called Urban Mind. People were asked three times a day whether they could see or hear birds, and afterwards they responded to questions about their mental wellbeing. “There is growing evidence on the mental health benefits of being around nature and we intuitively think that the presence of birdsong and birds would help lift our mood,” said lead author Ryan Hammoud of King’s College London.

Homelessness in New York City has reached its highest levels since the Great Depression. Over 50,000 people sleep each night in a shelter, while thousands of others rely on city streets, the subway system and other public locations as spaces to rest. That’s why this meal (and sock) delivery van is an effective resource for providing aid. Every night of the year, from 7pm to 9:30, the Coalition for the Homeless drives a small fleet of vans to over 25 stops throughout upper and lower Manhattan and in the Bronx. At each stop, adults and families in need can receive a warm meal, a welcoming smile from volunteers, and a fresh, comfy new pair of Bombas socks.

Between May and August of this year, the EU set a record when it generated 12.2 percent of its electricity from solar power, according to energy think tank Ember, reported the World Economic Forum. A new study by Oslo-based energy research company Rystad Energy said extending Europe’s solar photovoltaic (PV) capacity would be 10 times less expensive than operating gas-fired power plants in the long run, Electrek reported. The study said that the dropping of the cost of renewables, market challenges and inflated gas prices all point to a shift away from natural gas as Europe’s main source of electricity, reported the Institute for Energy Economics and Financial Analysis.

At Children’s Health of Orange County, California, you need to be on the look-out for tots getting lab tests—because they’ll be tooting the horn at the wheel of their new electric Honda, which is bringing laughs and comfort to sick children. Designed by Honda engineers to ease the stress and anxiety of hospitalized children, the car brought tears to their adult eyes when talking about its genesis. Called the Shogo, it was specifically designed to navigate hospital hallways and transport all the IV drips and monitoring machines a child might require. It allows them to drive themselves down the hallways to their treatments; turning what could be a stressful journey into a fun joy ride.