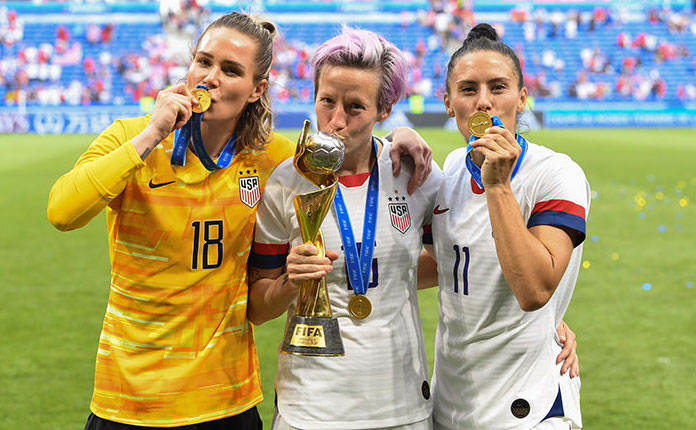 US Men’s And Women’s Soccer Teams Finally Have Equal Pay. Here’s What That Means

The U.S. government has doubled the number of COVID-19 test kits people can order for their household. The government previously limited households to one order of four at-home rapid test kits, however, households can now order eight kits. The kits come in two packages and will be shipped free, according to the U.S. Postal Service. People who have ordered previous test kits from the program are eligible for another round as well.

The U.S. Department of Justice has announced a new Office of Environmental Justice alongside an environmental justice enforcement strategy. The office, which is within the Environment and Natural Resources Division (ENRD), will prioritize protecting communities hit hardest by polluting and contaminating industries. “Although violations of our environmental laws can happen anywhere, communities of color, indigenous communities, and low-income communities often bear the brunt of the harm caused by environmental crime, pollution, and climate change.”

The Invisible Ukrainian Who Walked 225km To Safety From Mariupol

by Daniel Boffey, The Guardian

The aim was to be the invisible man, says Igor Pedin, 61. It was to drift, as if a ghost, with his small trolley bag of supplies and dog Zhu-Zhu, a nine-year-old mongrel terrier, through the hellscape of the besieged port city of Mariupol, out into the badlands of Russian-occupied territories and on to the relative safety of the Ukrainian-held city of Zaporizhzhia – a mere 225km walk away. The equivalent of walking by foot towards the oncoming convoys of tanks, armoured vehicles and nervous trigger-happy Russian soldiers racing towards Mariupol.

The energy in a hospital can sometimes feel overwhelming, whether you’re experiencing it as a patient, visitor or employee. However, there are a few one-of-a-kind individuals like Elaine Ahn, an operating room registered nurse in Diamond Bar, California, who thrive under this type of constant pressure. Nurse Ahn felt drawn to a career in healthcare partially because she grew up watching medical dramas on TV with her mother. She quickly found out that real-life nursing is quite different from how it was portrayed on her favorite shows.